Recently, I came to the realization that I don't exist; I haven't for years. And when I say years, I do in fact mean infinity, it's just that I'm lazy, and it's simpler to write "years" than to be bothered with typing out all those zeros. 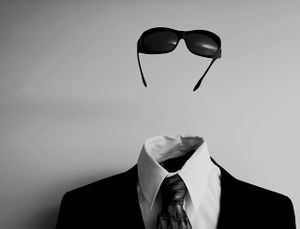 Or at least I would be lazy, if I existed, but I don't.

Now, for the benefit of you nosy people who have no business reading someone's private diary—if you need reassurance at this early point, re-read the title. And for those of you who are too lazy to re-check the title above (though not in comparison to me, because, as I've already stated, I don't exist to allow a comparison), this non-treatise by a non-entity is untitled "Contemplating my non-existence". If it were in fact an actual treatise written by an actual entity, it would be instead titled "Contemplating my existence".

Now let's just dismiss your next point of contention right away by saying that the fact that you are reading these non-words in a non-existent article does not in any way, shape or form constitute some kind of proof that they were written by me, and therefore I must exist.

First of all, there is no proof that these words were actually written by me. It could've been anyone. It's well known that Sal Fasano has time on his hands, giving him ample time to have written this. It's even more well known that Sal Fasano has blood on his hands, giving him ample reason to keep busy creating a trail of false and confusing leads for the legal authorities to follow. Writing strange, logically inconsistent and wholly incoherent articles and attributing them to a made-up sockpuppet user (who just happens to share the name of a has-been B-List pseudo-celebrity writer who has effectively been retired since 2006) is just one way he accomplishes his evil work.

And second of all, none of this text is actually here. It could be that triple-fried enchilada doused with mint-chocolate chip ice cream that you inhaled before bed last night, speaking to you in your R.E.M. sleep. It might also be that tablet of Gamma-hydroxybutyrate that the tall, attractive hunk dressed like Rob Halford dropped in your piña colada when he distracted you by pointing out the stellar backside of that hot, sweaty Armenian waiter from Chippendales. How should I know? It's your deluded psyche, balanced precariously upon the lifestyle of your choice. You tell me.

Or at least you could tell me, if I was here, but I'm not.

Now, would you care for a Cosmopolitan, or perhaps another helping of Rocky Road?

On second thought, you've had enough.

I've heard it said by people that "there is no compulsion in religion". What exactly does that mean? 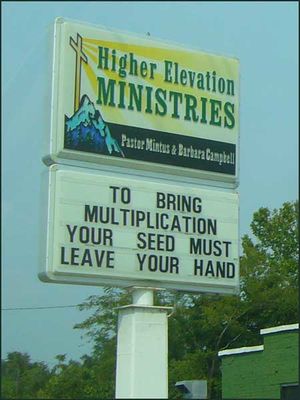 I wish someone would explain it to my family, because ever since I quit attending church regularly, they've been trying to compel me to return. Sure feels like compulsion to me. Of course, when I say "compulsion" what I really mean is "spiritual extortion".

At first they were gentle, expressing polite concern than I might be endangering my soul to immortal peril. Later, they were more emphatic, warning me that if I didn't return to God, we would be separated in the afterlife. Somehow, inexplicably, this prospect seemed very appealing to me. Naturally, when I say "inexplicably", I mean that it would be rude to come right out and say "I hate you all." So, completely explicably, I said nothing but allowed myself to slide away further still, from being an Advent, All Saints' Day, Christmas, Easter, Lent, Palm Sunday, Shrove Tuesday, Ash Wednesday attendee to just an Easter and Christmas bandwagon rider.

When I was warned again—this time in no uncertain terms—that I was surely on the Expressway to Hell, I promptly traded my Toyota Tercel for a Ferarri Mondial, and bought a pair of leatherette asbestos-lined driving gloves. Bliss.

Reflecting on my past experiences in church, I wonder what about it might have compelled me to want to stay there. Among the strongest compulsions I can recall:

Time and distance has provided the perspective that has allowed me to better understand these compulsions now.

And, upon further reflection, perhaps my faith deserves another chance.

P.S. Quit reading my diary. The fact that you somehow found this duct-taped to the wall behind my framed "My Little Pony" movie poster says as much about you as it does about me. And you should worry.

Yesterday I was eating a ham sandwich and I had another stark realization. Pork is evil.

As wide as the gulf of understanding may be between the Muslims and the Jews, this much they can agree on: Pork is evil. 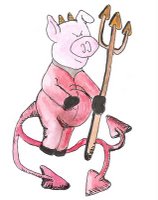 Of course, they'll continue their fervid debate on the relative merits of the Koran vs. the Torah, but when it comes to casting their scorn before swine, they're "Brothers in Argghhh!!!" Because pork is evil.

The Palestinians and the Israelites will continue to war over the occupation of the West Bank. But they'll be no war over "What's for dinner?", because it won't be pork. If you hadn't heard—pork is evil.

Feel free to disagree passionately, while foolishly attempting to tempt me with the savory scent of frying bacon in the background. Do your worst. Strap me to a chair at the breakfast table, and subject me to the devilish tune of its snap, crackle, pop in an iron skillet. Wave a strip of glistening doom within inches of my face, gently waggling it to and fro, like some beckoning finger inviting me to eternal damnation in a one room suite at La Casa de Satanás.

It won't work. I've seen the light, and pork is the work of the Prince of Darkness. Forget all that talk you've heard about chocolate cake being devil's food. You know better.

Force me at gunpoint to watch never-ending re-runs of Weird Science, and that scene where big bad Chet suggests, "How about a nice, greasy pork sandwich, served in a dirty ashtray?" I might bend, but you can't break me. I'll just be wondering how Hollywood producers figured that a dork like Anthony Michael Hall could make the leap from a stereotypical geek in films like that and "The Breakfast Club", to studly, leading man roles in films like Johnny Be Good. It was a dead end. Dead like you'll be, unless you forsake that swine flesh.

It's beyond religion, beyond geography, beyond reason. But it is. It just is.

P.S. For the love of God, stop reading this. You're only causing irreversible harm to yourself.

"Ants in my Driveway"

Often it happens that I lie awake at night, unable to sleep, or sleeping fitfully as I ponder the ants that urinate in my driveway. It isn't enough that they inhabit my property, feast on my fertile grasses, and write weekly letters to the editor complaining about the appalling conditions under which they live. Of course I am never named in these letters, but I know that everyone knows that they mean me. Who else's ants write to the local newspaper? 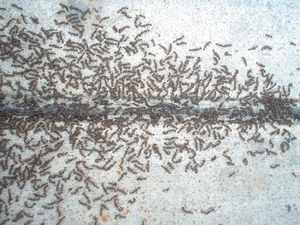 The editor, for his part, claims to have no such letters in his possession, nor any idea who I am. But like most people I meet, I suspect that he's just too busy to talk to me, and latches onto the most readily accessible excuse available. He's probably never even considered that he himself has hordes of tiny ants, urinating in his very own driveway, at all hours of the day and night. Perhaps if he received a letter of complaint from one, then he'd believe me, and be forced to apologize. Then he'd have to write me a letter. And so I check my mailbox thrice daily, except Sunday because there's no mail delivery on Sunday. Then, I'll check only once, on the off-chance that my postman has noticed a letter for me on the floor of his truck, and has brought it to me straight away.

But it is night, and my postman is at home sleeping.

I know this because I've watched him sleep, and wondered how many more hours it would be before he would wake up and bring me my letter. He usually wakes up at about 4:15 AM, which, I have learned, is considered rather lazy, indolent, and unprofessional behaviour by other postal workers who I have also watched, and who talk about my postman when they think no-one is listening. I listen, and watch. And those postal workers usually wake up no later than 3:50 AM.

It is now 3:52 AM, and my postman is at home sleeping. Elsewhere, other postmen are showering and laughing about him.

So here I sit, hands clasped tightly over my ears between these keystrokes, trying to quiet the loud rush of the torrential downpour which even now threatens to permanently stain my asphalt. It is too early to use my pressure washer. The stack of fines on my night table for breaching city noise ordinances reminds me of this.

So I wait for the sun to come up.

P.S. Still reading, huh? I do hope you're satisfied.

Featured Article  (read another featured article)
Featured version: 7 June 2009
This article has been featured on the front page. — You can nominate your favourite articles at Uncyclopedia:VFH.