For those without comedic tastes, the so-called experts at Wikipedia have an article about League of Nations.

The League of Nations was a competition that existed from June 28 1919 to April 20 1946[1], comprised of countries that take part in the game of War. Winning a war scores points for their team. In the event of a draw, the country with the most kills wins, or in case of a further tie, whoever firebombed the most schools. (See also: World domination high scores list)

The League of Nations was formed in 1919 in order to keep the score on which countries were most successful in military conquests, or just to prove what rubbish the French are.

The founder in all his glory.

There were 63 countries involved in the League of Nations by 1946, although some sissy countries were not involved. Each country is allowed as many soldiers, tanks, battleships and aeroplanes as they can afford during the season. However, this could irritate the other countries as they might feel threatened by the other team's power, increasing their chance of being on the offensive[2].

Most of the major countries in the world were a part of the League of Nations at one point, with the exception of its founder, the United States[3]. The reason for this was that they didn't want to get involved with European affairs and wanted to isolate themselves from the rest of the world[4]. However, in the last battles of World War Two, they decided that they wanted to be a part of the competition and take credit for winning it.

After many years of War in the trenches of Western Europe, the Great War was nearing its end. President Woodrow Wilson however was very displeased when he found out that no one was taking score. The Allies had smashed the Central Powers into the dirt, at great cost, but there was no trophy, no prize at the end. Had it all been for nothing? It was at that moment that Wilson came up with the League of Nations and his 14 points.

After Woodrow Wilson drew up his 14 Points, all the other countries were unsure as to whether his rules would work. Italy, France, and England whined about how Wilson was a big meanie for not letting them help write the rules. After months of incessant whining, Wilson finally agreed to host a big party in New York City where they could all get laid and forget about the whole thing. The French, slighted again that Wilson was writing the rules of the party, insisted that the party be held in some town nobody had ever heard of called Versailles.

Letting France host the party was an extremely bad decision, because everyone totally knew that France was gay. Seriously. There were no chicks. Total sausage fest. Wilson jetted an hour after the conference started, leaving everyone else at the mercy of those stripper mimes someone had invited. At that point, everyone except the mimes (who were thankfully killed a few minutes after showing up) decided that they would draft their own 14 Points. This was another bad mistake, since none of the guys knew how to draft any points. The end result was 15 nonsensical points about nothing in particular (since Italy couldn't count and insisted that it was 14).

Days later, France, Italy, and England showed Wilson the revised points. Wilson laughed and said that they could use the rules they wanted, but he wouldn't be playing. Frustrated, everybody just decided to forget about the whole thing and just use Wilson's 14 Points. 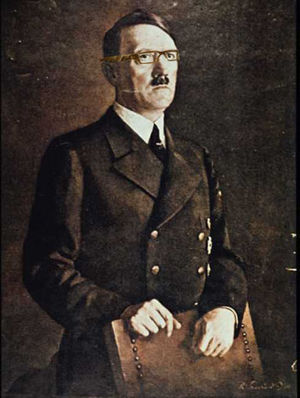 Hitler and his German team. The takeover was influential.

The most notable series of events during the League of Nations was the rise of a brand new manager of Germany, Adolf Hitler.

Germany, after being defeated in the first War, was in huge debt. They needed a new, ambitious manager that would bring them fame, success, and women. The plucky young up-and-comer, Hitler, was really the only man for the job.

Despite having much experience playing in the First World War and being known as the Offensive Coordinator position for Germany under the head coach Hindenburg, the Nazis had finished the previous season with a pitiful 12 seats in the Reichstag. Hitler needed only two years to turn his presidential campaign into a presidential reality, defeating the Social Democrats.

This takeover of the German National side was slightly controversial in some quarters, because Hitler decided that he wanted to be the manager without any competition; to do this he brought in the new rule called the Enabling Act, allowing him to become the manager of Germany for the rest of his life, and up to, but no more than, three years after he died.

World War 2 was the only major season of the League of Nations, caused by everyone taking part in it keeping to Woodrow Wilson's 14 points. 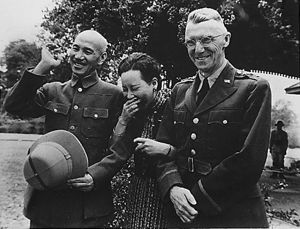 China's season tickets, procured by the USA over the objections of Japan, gave it a front-row seat at World War 2.

In the pre season friendlies, some of the pundits gleaned valuable information on how the season ahead was going to go. Italy fought Abyssinia in a very convincing win 10-0, taking their land for keeps. Germany also had their own fair share of friendly games, including at the Austria arena and at the Rhineland. Germany took both games by storm, winning a perfect 10-0 both games, much to the annoyance of France who managed to claim the Rhineland Territory after the First World War. The last of the German friendlies was against Czechoslovakia. This game however, was stopped by a joint protest of the coaches of the US and British teams when Czechoslovakia was in the lead with 3-2. This was because the Czechs were playing like sissies. This was not because they wanted the German Basher trophy themselves although many may say so. The British however had a particularly brutal friendly game with Ireland, causing the Irish to abstain from the main tournament in protest at the violence to the so-called "friendly".

A great discovery from these games was the fact that Russia had a great home record. This is due to the fact that the Reds' stadium is in terrible condition and has something to do with a cold winter.

However, during one of the pre season games there was much discussion on whether Japan should be eligible for the tournament, as they stole Manchuria outright without letting China have a chance of getting the land back. It was eventually decided that they could participate, but only if Americans could refer to them as "those damn Japs"[7].

After Soviet Walk-over victories against the Baltic States, the coach Stalin expected an easy game against another shithole. However, the Finnish called in their ski team and also got som lent players from Sweden. This combo proving very effective, the offense was completely stopped by the Finnish head coach Carl-Gustav Mannerheim. The Finns went out in break with a well deserved lead. However, in the break, it was discovered that the Finnish ski team, as usual, had been taking performance-enhancing drugs. After a time of counsulting, the League decided to ban the ski team for 6 months. This meant that only the reserves and Swedes were left. After this the Russians had no problem winning the war. 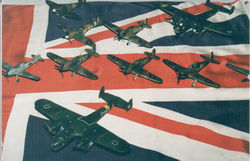 That is one big flag.

The two countries that were primarily involved in the fighting were Germany and Britain.

The plan was for Germany to try and gain power over Britain by beating down the RAF, who were currently delivering many supplies to Britain such as food, materials for building bomb shelters and victory flags (for the inevitable win of the War). Even though Germany led the onslaught with more planes, Britain fought back to a win using more allies.

An early version of Hawkeye adjudicates on the game in Dunkirk.

This ended up as a German tactical victory and an Allied evacuation so although it was decided that Germany had won on penalties, the British felt they had achieved a moral victory. "We woz robbed," declared Churchill. They fought on the beaches of Dunkirk over the fact that Churchill had knocked down Hitler's sand castle on his way to the ice cream man. Hitler retaliated on this and sent his troops out to destroy the team of Britain once and for all.

But, a lack of strategic knowledge on Hitler's part allowed Britain to escape back home.

The final onslaught on Germany, organised by the USA. This title-decider is where the USA finally joined the League and picked up the most points[8]. It was known as the final push for Germany finally ending the game, allowing Wilson to total up the points. 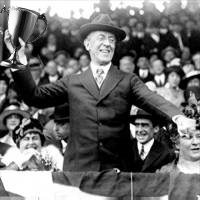 Woodrow celebrating his win in front of his loyal supporters.

*Japan had all their points taken away due to war crimes, however, they still finished ahead of France because France is rubbish.

Most of the teams did not take part and therefore are not on the table.

The new logo of the League of Nations United Nations.

After the War, the League of Nations depreciated because, apparently, the countries are at peace now and don't want to take part in any more competitions.

Featured Article  (read another featured article)
Featured version: 15 February 2007
This article has been featured on the front page. — You can nominate your favourite articles at Uncyclopedia:VFH.