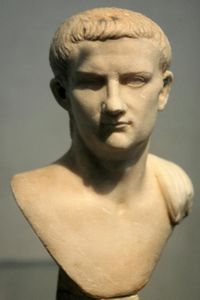 Caligula, contemplating taking an enemy up the wrong 'un

“I'd like to thank my parents, my breeder, my producer, and Jupiter for making this day a reality.”

~ Caligula's horse on its appointment as Consul.

Now, let's get something straight: historians have certainly not been kind to the emperor Caligula (often known by his nickname Gaius[1] Germanicus) and, to be honest, this is largely with good reason. As well as being bat fuck insane he killed an enormous number of people and fucked his own sister, both of which are particularly endearing qualities in a leader[Citation not needed at all; thank you very much]. But, in this enlightened modern age, is it time to re-assess the mad, murderous sister-fucker? Can anyone reading this honestly say that they wouldn't be tempted to do the same if they had a laurel wreath placed on their head?? Let's look at all the evidence first before we pass judgment. 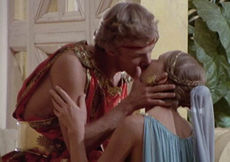 Caligula was do depraved that he kissed his sister every day! Ewww!!

Caligula was born the son of Germanicus, a Roman general who was popular with the emperor Tiberius, so popular in fact that Tiberius had nominated him as a possible successor which, if later imperial successions are anything to go by, probably means they were playing hide-the-sausage. The young Caligula spent his early years wandering around the military camps on the frontier between the Roman Empire and Germania and urinating on the feet of soldiers. For some freaky reason this made him popular with the men who gave him the nickname "Gaius Germanicus" which means "Darling, you're a star!"

During this period there was a revolt by the Germanic legions against Tiberius because they'd become sick of being lorded over by such a sourpuss twat. Germanicus was unsettled by all the violence and feared he would lose control but then young Caligula toddled out of their tent dressed as a Roman soldier and the big, hairy, fighting-men suddenly all stopped and started at the cute young boy. After about an hour of "awww, look at his widdle suit of armour!" and "wook at his tiny sandle-wandles" the men completely forgot what they were rioting about and went back to their tents ending the uprising. 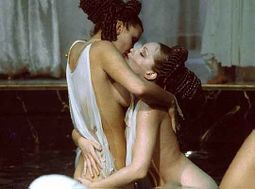 Caligula was adopted by Tiberius after Germanicus managed to give himself a gammy leg during one of his many battles which later managed to kill him. Some people claim Germanicus was poisoned but if we dwelled much on every allegation of every famous Roman death being down to poisoning there'd be no room left on the internet. Because Germanicus had been popular and because Caligula was his son, Tiberius decided to adopt the boy as his successor. It's all very well saying that was a shitty idea now but at the time it was probably rather sensible. Who should Tiberius have handed power over to? The senate? What are you, some kind of pinko liberal? 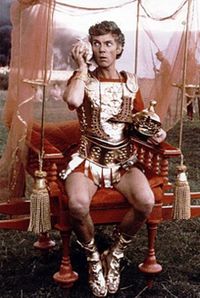 Depraved, demented, debauched, decadent and deadly - Caligula was still a bit sensitive when it came to receiving dirty calls on his shell phone.

Tiberius died in 37AD, most likely of being old although it's alleged that Macro, the head of the Praetorian Guard (and also the owner of a tacky range of discount warehouses) , smothered him in a tea bagging gone wrong. They didn't call him Macro for nothing . Whatever the reason, the old emperor was dead and Caligula took Tiberius's imperial ring and slipped it onto his penis. This sort of sexual perversity was a mere taster of what was to come.

Caligula, like a great deal of nutters, started out quite agreeable. He announced a general amnesty and allowed all the people Tiberius had imprisoned for offenses such as singing in the wrong key to go free. He also threw lots of money and bread at the Roman plebs and the Roman plebs loved having money and bread thrown at them, they couldn't get enough of it.

The trouble all started when Caligula went insane. No one is quite sure when and how this happened, indeed one historian of the time notes that "the emperor was perfectly nice one day and the next he was simply batshit crazy". The effects of Caligula's new-found Tom Cruise persona were evident. He decided he was going to invade and conquer Britain and marched to northern Gaul to the relief of the senate. However, he was back within a couple of weeks and he'd had his soldiers collect seashells. When the senate asked whether he'd subdued Britain and brought any savage Britons home for the purposes of a triumph, Caligula replied "No! I have done better! I have conquered the sea! Look, look you upon the spoils of the conquered ocean!". He then proceed to cackle madly, his eyes went all googly and spun around.

Caligula gets in some rowing practise for the annual Citizens v Slaves boat race on the Tiber.

For the religious among us who choose to believe lies, the so-called experts at Wikipedia have an article about Caligula.

Caligula was a nudist. Despite his otherwise gentle personality, Caligula simply would not allow anyone to wear clothes in his presence. This gave rise to the phrase "putting on the Caligula." This behavior distressed his dead uncle Tiberius, who punished Caligula by making him sit in time out for ten minutes!

Unlike other Julio-Claudian emperors, many of Caligula's personal belongings have survived the ravages of time. Scholars have speculated as to the cause of this anomaly, but it remains a mystery to this day. The most significant of these surviving relics is a collection of paper doilies, which is currently on display in a small museum in Montana[2]

Crazy things Caligula did when he was Emperor[edit] 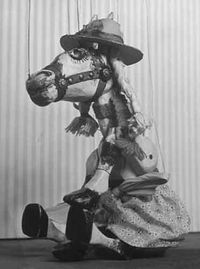 Consul Muffin Mulus dressed up like a Swiss milking maid. Yes - Caligula was that sick to put a frock on a horse ! 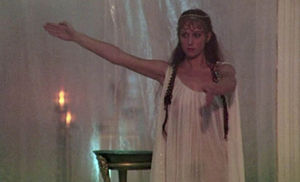 Caesonia directing the sex traffic to her temple.

Believe it or not, Caligula's sister Drusilla kept him partially sane but she died in his bed. Officially the news was released that Drusilla had succumbed to fever but Caligula's many enemies suggested he stabbed her to death in a murderous sex session. Caligula blamed the rest of his family and killed off a few brother-in-laws who had bored the pants off him at the last Saturnalia. He then banished his surviving sisters sisters Agripinna and Livilla to a remote island to appear in the tv show Sexual Fantasy Island.

Fearing for their own lives, Caligula's henchmen looked round for someone to keep their emperor amused, just in case he took anything out on them. They found Caesonia, a High Priestess of the Temple of Isis, a favorite cult hang out for rich womans who wanted to sit in a fog of incense and increase their self auditing skills. Caligula agreed to the match and married Caesonia. They made a happy couple but you needed a stout backside to stand up to their Saturday night whipping parties. 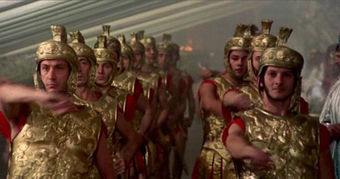 Caligula's Imperial Mincing Cohort in a show of strength. Awesome.

After Caligula had declared himself a god, he had the sea whipped for its disobedience (at least that's why he said he was whipping it), declared war on Neptune for not phoning him after their first date, poisoned everyone at a banquet in his honour, the Romans realised something was up with their leader. And thus, the Praetorian Guard, whose sworn duty was to protect the Emperor decided to do what they did best in times of need: kill the Emperor. Thus, a conspiracy to get rid of Caligula was eventually formed by Cassius Chaerea ('My Chaerea..never gonnna give You up' etc etc) with his fellow Praetorian guard officers. They eventually cornered Caligula as he was running to the loo after watching a ballet class fight to the death in a pool of crocodiles. Whilst he was drying his hands - Chaerea who had once been made to wear a dress and lipstick on parade - knifed Caligula near the paper towels and left the blood to ooze out into the corridor. This was the apparent signal for others in the conspiracy to go round killing anyone who was related to old 'Mad Eyes'. But they overlooked one old fool hiding behind the wallpaper - Claudius.