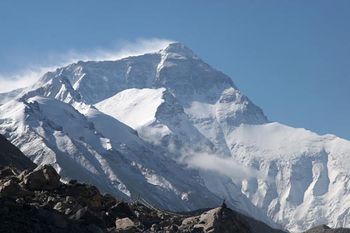 There is a mountain on the Sino-Nepalese border named Everest.

In the corrupted words of Sir Edmund Hillary, the simple fact that an 8,848 metre high pile of snow and rocks exists is enough for a man to climb it. The Tibetans name it Holy Mother... simply because the lack of oxygen makes it difficult to pronounce the Tibetan swear words that would follow. Others describe the sub zero vertical passes a kind of hell on Earth. That's why I'm going there. That's the kind of man I am.

The slopes will be my bedroom, the crevasses my dining room and the mountain goats my door mat.

As people say, if the mountain won't come to Mohammed, then Mohammed must go to the mountain. I assume what they mean is the one thing more dangerous than drawing a cartoon of that saying was an ascent of Mount Everest.

The May expedition will certainly qualify as the upper echelons of adventure, and push turning up to school in your underwear off the proverbial pinnacle of bad dreams. I shall record the tale of this incredible adventure in this journal while 8 adventurers and I tackle with the planet's Behemoth.

I heard about the expedition through a contact of mine who had a bad feeling about this from the get go and urged me to join. My honest guess now is that he didn't appreciate me that much, but it was my fault for not opening my eyes after my car's brakes gave out on me for the third time after he offered to repair it.

I braced myself for the harshness of the weather and the severity of the terrain, then proceeded to get on the move to the Kingdom of Eternal Snow: Nepal. We visited the Dalai Llama so that his Highness could bestow the Grace and Protection of a jolly, fat man upon us. I should have known something was amiss when I accidentally took a nasty tumble on the Sacred Leader during the holy ritual. Unfortunately, I didn't have much time to reflect on my clumsiness, as I was running from the High Priests who were in hot pursuit, brandishing their sacrificial daggers. 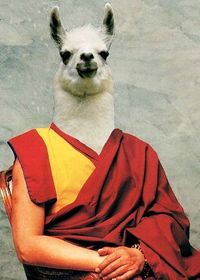 The Dalai Lama was a great bloke, his followers, not so much

Following a frantic chase in which I ultimately prevailed, we finally arrived at Everest Base Camp. I had an opportunity to assess the mountaineering abilities of my fellow climbers: one of them, Yohan, asked me how to tie his shoelaces, while I saw another slipping in his "climbing sandals". Of course the expedition chief, John "Mountain Goat" Smith, looked like he knew what he was doing. He was a real mountaineer.

One evening, I found a cryptic note in John's tent, which was addressed to his wife and children that had been carelessly left in a portable padlocked safe next to our leader's sleeping bag. The text expressed in great detail how he loved them, and to please forgive him for being such a terrible husband and father and that he would at least bring a lot of stupid people with him to ease the weight of imbecility on this Earth. I didn't know what to make of this, bring them where? What did he mean? I slipped the note under his pillow and soon forgot about the benign message scrawled in arterial blood.

Heavy snowfall accompanied with a -75 Celsius temperature thanks to winds with a velocity of 120 mph were forecasted near the summit the next day. Everybody was on high alert and all souls turned to our guide John, who declared (while crying his eyes out) that tomorrow would be THE day where we would reach The Promised Land. John said the weather guys were full of crap one time out of 25 anyway. Even sandal guy didn't complain, as we all were compelled to reach the summit like a magnetic force was radiating from it. I really fancied being the 156,627th guy to get up there, so I went into the arms of Morpheus that night with great apprehension. Even my teddy bear seemed on edge. 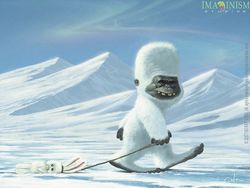 A picture of the Yeti I managed to grab just before John shot it. Tasty.

The sun came up on that fateful day and after ingesting a Yeti stew to sustain me throughout the gruesome climb, I set afoot with the group. We climbed relentlessly, drawing ever closer to the Holy Grail: the Summit, which called to us like a Siren caught in a fishing net. As all reliable meteorological resources have been warning us, we were soon surprised by an unexpected and vicious snowstorm the likes of which have rarely been witnessed by mankind. John told us to shut up and push on.

Sandal guy was the first one to go: he was freezing like a popsicle and I felt great pity for him, as it seemed he would not last long in those dramatic conditions. My altruistic personality got the best of me. As we were nearing the Summit Ridge, the blizzard was so intense that Mr. Sandala lost his footing, trying desperately to hang on to the closest rope he could grasp: mine. In an act of mercy, I saved him from an horrible death by hypothermia while he was dangling over the gaping ravine: by sending him flying off the mountain to meet his demise by cutting the rope. I didn't even hesitate for a second. Don't call me a hero, anyone would have done the same thing. I was however quite irritated that my heroic maneuver caused me to lose a couple feet of rope.

Some members decided to go back to base camp since pushing forward was suicide, as we could hear a female Yeti's deafening cries for revenge sporadically through the maelstrom. Probably our breakfast's mother. I can't be 100% positive about the fate of my returning companions, but my best guess is that they met mom... At this point the Yeti stew started playing games in my digestive system, as if the bite of the freezing storm wasn't enough. This episode left only John, Yohan and myself still struggling on the harsh climb and we decided to attempt the ultimate push for the summit. Icicles in my beard, I staggered forward in the blizzard and the rarefied oxygen, followed by my companions. John was delirious, saying there is no way we would manage to get out of this predicament alive, and laughing hysterically. That didn't hit me as something alarming. 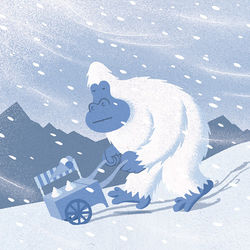 The ferocious Yeti's mom that killed our companions...

At the base a major difficulty, the Slippery Undies Pass, I noticed that Yohan's nose had turned to a purplish-blackish color. "He'll have to get it amputated. Someone should tell him to go back." I told myself absentmindedly. But nobody did, much to my surprise. An hour later, we had finally conquered the treacherous passage when Yohan fell waistdeep in the powdery snow. "I can't advance anymore!" he said with exorbited eyes. At that altitude, if you can't walk, you're pretty much facing your death unless someone aborts his push for the summit in order to save your life. I did what every classy mountaineer would do: I left him right there with some words of encouragement: "It pains me to do this, Yohan but you can find comfort in knowing that dying by hypothermia is the sweetest death of them all: I read it's like a morphine overdose. I would gladly go back down to get assistance but that would jeopardize my chances to reach the summit. I paid for this trip, you know?"

At this point, he looked at me with a weird expression, and I know he would have said to leave him there had he been able to talk. A frozen jaw makes it awfully had to articulate something else than "Whaaaaaa!!! Oooon't eeeaaave eeeee ahonnnnne!!!" it would seem. I could also have called base camp with my walkie-talkie but I didn't want to discharge the batteries' power.

I started climbing again in the hellish conditions, flattering my ego about how I eased the mental anguish of my dying comrade as I ventured away to the sound of the overwhelming and terrorized distress screams. I managed to hurry back to John's position, who was starting to speak gibberish judging from the snippets of conversation that came within earshot: "Belzebuth anguish evil Westboro Baptist Church MURDER THAT DAMN ASSHO... (inaudible) WHEN WE GET ON TOP, I'M GONNA KILL THAT MOTHERF...(choked on his foam)"

I blamed it all on the fact that his jaw too was beginning to freeze and that he was trying to keep the blood flowing to it by contracting his facial muscles. A brave man indeed.

I pushed on, icicles forming in my beard as the summit was in sight through the raging elements, an improbable Promised Land amidst the maelstrom. 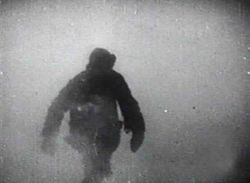 I photographed John in the midst of the storm.

I was beginning to experience

severe hallucinations as we were on the Summit Ridge, the last 100 meters felt like escalating Rosie O'Donnell. I was following a mumbling John step for step, but I couldn't distinguish his rambling. We finally set afoot on the Top of the World! What an incredible feeling! What an exhilarating... (POW!) John had just hit my shoulder with his icepick, missing my face by an inch!!!

"I will kill you, you son of a bitch, you were not supposed to make it this far! You read my note, I knew it! It was to be my testament. I'm gonna end my life on the Roof of the World, along with yours! Brace yourself!"

I had no time to think rationally whatsoever as John charged me and nearly pushed me in the abyss. It was time to have a trip down memory lane and remember those Kempo moves Mr. Miagi thaught me in 5th grade.

I countered the pushing maneuver via my famed move, the "Jiu-Jitsu 'Round the World' Flying Kick" which seemed to destabilized the crazed bastard quite a bit. By that point, I screamed back at the guide: "John, it's me, err...[1] anyway, stop it!" He did not seem to hear me at all as he prepared the "Suicidal Quetzalcoatl Fury". The thunderbolts ricocheted on my icepick.

I had then time to load the "Imbecile Thunder Strike", which hit John right in the chest and sent him staggering on the Summit's edge, when he unexpectedly summoned the "Fenrir Ultimate Destroyal". By the most incredible chance, it managed to miss my formidable person, and I seized my opportunity to cast on him the "Wanker's Ultimate Shot", which sent him tumbling down the mountain. I will not describe in graphic details what the "Wanker's Ultimate Shot" consisted in, but suffice it to say that such a gruesome death should exist only in the reader's imagination.

Dear journal, I hope somebody finds these writings one day, as I was going down the mountain and forced to set my camp in desperate conditions on the South Ridge. As I am writing this, I am laying prone in my tent and I am wondering how in the hell can my shelter manage to hold on despite the deafening winds. Wait, I hear something else... What is it? I am going to leave you now dear journal, I think the Yeti's mother is screaming bloody revenge.