~Gunk "The Cro-Magnon Critic" from What's New in Wordbook Review

A superfluous and pedantic case of verbal diarrhea, brought forth from the hand of a simpleton who obviously possesses only the most rudimentary grasp of language and qualifies, undoubtedly, as mankind's very first pretentious fop.

~Urk, Editor-in-Chief of Rocks and Sticks Monthly Digest Gazette: The Magazine for the Discriminating Caveman

January - Well, one tries. One cultivates one's friends and attempts to bring forth beauty into the world, and yet on some days the struggle just seems too oppressive for words. Bur has taken up the popular new hobby of hitting other people with rocks. Too bad, I liked Bur. He was not the most verbose but he had a fine taste in fermented mammoth cheese. He possessed a bottle of something Gallic or at least from within the Gallic environs, and once proffered a snifter of that elixir to me. I accepted, of course; the memory of that heavenly spirit still brings a tear to my eye.

It all went wrong, I believe, when Bur decided that his previous hobby, viz, giving other folk a brotherly pat on the back, was not keeping him interested, so the deranged simpleton went and invented a club-like thing, which maims or even kills. Suddenly he was saying things like, "Now Bur know how gods feel!" while thumping his chest. At this point, not even the mammoth cheese could retain my services.

It looks like he's at war with Muk...something about Muk dragging Bur's wife, Lum, away by her hair. I mean, really. It's as though some people haven't given a moment's thought to the consequences of their actions. Practically animal, that's what it is.

Muk, in turn, has gone mad and made his club all long and pointy. He could poke out an eye with that...poker. This will come to no good. Still, Bur does have good taste in liquor, liqueur and the like...while Muk insists that the infernal hot dog is "wicked good". I shudder at the memory of being a guest at a picnic of his, or "bar-beekoo" as he calls it: the first and last time I shall ever dine at Muk's.

January - My other half and dearest, salve of my soul and voice of my conscience, mentioned in passing, last night as I sipped an aperitif, that we really should invent another month. While our one month system has served us well, lo these many month, the concept has grown dull. We've attempted to improve the calendar before, but it has always degenerated into naked mud wrestling as one group wants it to follow the moon, while another, the sun.

Gor, meanwhile, continues to fritter away his time on his "tubes". A fool's errand if there ever was one, in my opinion.

Sigh. Just ignore that rude outburst. Urm does that sometimes. The poor deluded Homo erectus thinks that qualifies as humour, and perhaps inside his own personal zeitgeist, it does. Perhaps all truth is relative, and maybe anything goes - like we live in a ball in a huge black cave or some such. Even worse; every time the name of his species comes up, in pleasant dinner conversations and suchwise, he giggles uncontrollably. If you ask me, I think he's rather low brow.

Oh, dear. I fear that I've just invented the pun.

February - Success! We have finally pushed the calendar amendment through tribal council. Imagine, two whole months every year...there are even rumours passing about that Vin is working on something called "numbers". Our son, Stim, simply cannot wait to see just what this "numbers" is. Isn't science wonderful? As a genus, we've come so far; I remember Grandpapa gathering us 'round, and telling us about how his generation was scared of the thunder god, Moop. Father, meanwhile, was scared of the water god, Mer. Myself, I'm mostly afraid that the wife will discover I've chipped her favourite rock.

January the 1th - Vin has entrusted our humble house with the Beta test of his "numbers" invention. He says that it is still a work in progress. One and two. I can't fathom just how we got along without them. 'I had two servings of antelope this very morn'. Why, just yesterday I had only the vaguest glimmer of how much of something I had. I actually assumed something along the lines of a vague pile of antelope. Now I know that I had two of them. Oh, what will the future bring? Will we one day, for instance, be able to cook food to perfection inside a box that goes ping? 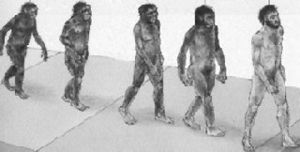 The author is second from the right, probably.

January the 2nd - Last night our dear neighbour, Urk the Homo neanderthalensis came over to sup with our family and, after a delightful smorgasbord of foods, we hunted and gathered, and then he told us that he had discovered monotheism!

And yes, even as I write, 'tis true! Quickly I phased out of that conversation, more of a monologue really, and gravitated over to a delightful plate of petit fours. Scrumptious! But they do so give me such a case of indigestion! I dearly hope that soon someone will invent fire, so that we may taste those delectable tea cakes cooked, and perhaps refrain from filling the cave with our internal gasses, though the meager warmth they provide may indeed be welcome.

But I digress...Urk came over and told us about his new, as he called it, "faith". Odd concept, really, he honestly believes that there is this "man" in the sky. "He", and indeed I should write "He", as Urk seems to insist capitalizing this particular usage of a pronoun when it pertains to "Him", no matter where "He" should happen to fall in a sentence. Also, he said that "He" is named Elohim, or Yahweh, or YHWH, or some such nonsense.

Imagine! A name with more than a single syllable...how bourgeois. 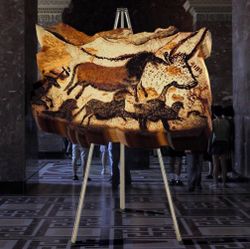 This painting, thought to be "Man and Spear and Hunt and Sky", is currently on display in the Louvre

This "Him", I'm told, is watching over Urk at all times, guiding him, talking to him and threatening him constantly. Frankly, the missus thinks that the fool is has gone quite off his rocker. Also, Urk's "Him" appears to be, shall we say, less than competent as a deity. Surely "He" must not be very good at this whole "infinite power" thing. Why, just this morning I personally witnessed Urk slip and fall on his hairy derriere while he was out collecting rocks. Perhaps, however, that particular moment comprised Urk's true destiny...

February 1nd - Recently I've taken up painting. My work thus far has been primitive, I admit, but there is something beautiful about the play of reds and browns on the cave wall that brings a simple joy to my heart. It fills me with despair, however, that they are too heavy to move. This has proven to be the Achilles' Heel, as it were, of paintings; in haste I painted the one in the library, "Man and Spear and Hunt and Sky", slightly askew and now the missus wants me to cover it with "wallpaper". I try to explain that there is no such thing as this "wallpaper", but her will is strong, whereas mine is weak.

February 2st - Just a short entry for today, I'm afraid. Vin has decided to add another number. He's calling it III. When in Rome, as they say... "Add". Hmmm. I think there is something to that...I must remember to pass it to Vin when next our paths cross. Anyway, I must be off, 'tis time to pack for safari. Though I'm no fan of mammoth, to be honest I find it gamey, I do so enjoy the hunt, because it is one of the few moments in my busy life when I get to go "GRRRRRRRRRAAAAAAWWWWWR".