“His last name is Hitler.”

For those without comedic tastes, the so-called experts at Wikipedia think they have an article about William Patrick Hitler.

William Patrick Hitler, (March 12, 1911 – July 14, 1987) known also as Willy, was Adolf's beloved nephew. Although he was fond of his uncle, William loved Uncle Sam more and that's why he fought against Germany during World War Two. 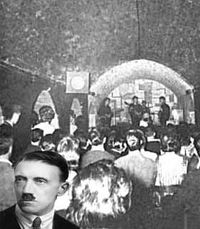 'Bloody Beatles - I'm off. I won't have musicians in my own bunker!'

William was born in Liverpool in 1911. His father was Alois Hitler Junior, Adolf's half-brother, and his mother was Bridget Dowling, an Irish woman with an explosive temper. Alois went in Ireland a couple of years ago, in order to open a restaurant with German specialties.[1] They met incidentally in Dublin, outside an Irish Themed pub named The Pink Gin Flamingo and made their home in Liverpool.

William had a normal childhood. His mother was jobless, while his father used to beat 'em both. Aaahh... those pure years... Anyway, Willy made many friends in school, where he was called the freaky-whore's son-German boy. His uncle Adolf (for William he was always Uncle Adi) visited them often. He made Willy many gifts, such as a Storm trooper Teddy bear and a junior edition of Mein Kampf with illustrations.

Adolf was indifferent to Liverpool's attractions, especially the women there who were loud and demanding. It is believed Hitler's phobia about the opposite sex was reinforced by this foreign experience. The only place he liked going was the Cavern Club, the dank underground cellar appealed to Hitler. It reminded him of Munich with its bierkellers but he always left before the band started. 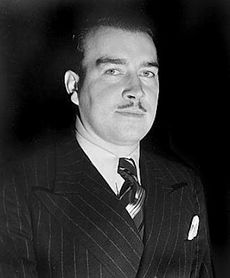 William Patrick Hitler's family photo. Do you want to take out insurance for a Second World War?

When William grew older, he went to live with his uncle in Germany. Although Adi loved his nephew he was an avowed bachelor and thus he didn't like this change. He demanded Willy to speak only German, but Willy didn't speak German fluently and this made his uncle really angry. Also, they had completely different music tastes. Adolf prefered German artists, such as Luddy van B and Oomph!, while his nephew like disgusting British music, such as The Beatles. Voices and fists were raised, Hitler loathed Nowhere Man in particular.

Despite any differences they lived together in relative harmony. After Adolf's rise to power, things went worse though. Uncle Adi found his nephew a job in a bank and later at an Opel factory, but William was dissatisfied. Why should I work? I am the Fuhrer's nephew!, he used to say. The biggest quarrel happened when they went to watch a friendly match between Dublin F.C. and Schalke SS. William, now sad and upset, left his uncle and moved to England.

In London, William became depressed and did some bad things.[2] He soon detoxified with his mother's help and they moved in U.S. On the outbreak of war, William enlisted in the U.S. Navy and fought bravely in Berlin and Frankfurt. His sailor's costume made him very easy target for snipers but they all missed. William used to tell everyone that Adolf was his uncle, but they just laughed loudly. He was lucky not to stand near any Russians, as Stalin had given instructions that any relatives of Hitler were to be send back to him for special treatment (i.e. shot).

When William went back to New York he married and had four children. Oh, accidentally their first son was named Alexander Adolf. He lived happily ever after but stayed away from the media and visiting Nazis, anxious to touch someone who had felt the breath of Hitler in their face.