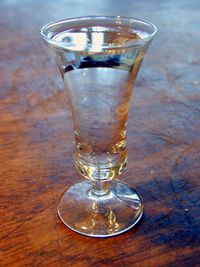 Danny-Boy "Double-down" O' Leary drank from a grail of dry ice everytime his number came up and more money slid his way.

Danny-Boy "Double-down" O'Leary, the product of a most pleasurable but slightly-broken condom, took sidebets while making sure that no one else could see his body hanging in the next room. These suckers had no idea he was dead, that he had hung himself over a girl of all godforsaken things, and that by taking their bets and playing their games he'd show them good! He'd win it all while hanging, something nobody had done in a long long time, not since the sandy days of the Old West when his great-grandfather, Slippery Dog O'Leary, hung himself and then went out and beat Hickok at poker.

The roulette wheel spun just as the dice flew across the table to hit the cards being dealt at the far end. The whore he'd hired for the occasion was the only one who knew he wasn't really there, that he had hung himself just minutes before, and she winked at him and smiled (the light from the chandelier reflecting off her three gold teeth, creating prisms across the spinning wheel and affecting the play). Her name was LuLu, and she lived up to every letter, and he'd have another go at her later. Now his only task was to win.

18! His number hit!!! Then an 8! Again, his number!!! Then 21! The triple crown!!! Three wins in three different games within one second, beating his greater-gramps record by at least a half-minute. "Take that old man", he thought out loud, "and your son, and his son. All of you called me a blown down leaking turned-over loser, huh???? You're all singing a different tune now, ain'tcya? Singing it off-key and in unison and clacking your bones against the side of your boxes, ain'tcya, old men!!!"

The game went on, with tennis interrupting every fourth hand as the house tried mixing in some noisemakers to distract him from his traction. But Danny just used the noise to his advantage and continued the rout. Luck was his now. He knew that when you're hanging like a bag of laundry within spitting distance of your game you are a flashing beam in the eye of the tiger and naked luck rides your back doing everything but burp you! Money comes with the wins, and he saw that even the snakes bellied up to the bar begin to take notice.

In the next room Danny-Boy's body sagged a little more, and spent some gas as LuLu went through its pockets. She found a communion wafer, a ticket to the weekend's Carrot Top show, and a thing that looked like yesterday's vomit wrapped around lizard innards. She put the wafer back, and smiled at her own luck, the luck of the whore.

The dice and cards and eight-foot birdy putts came and went, and the winnings piled on the table took on a substantial weight. "This has gone on long enough," said Danny-Boy "Double down" O'Leary to himself more than once. He heard his inner voice say in a foreign language "Cash out soon, me Danny ol' boy. Clobber over on limbless knees to collect ye money, and be surin' to tongue kiss the enriched air in front of the handing-out-the-winnings girl". Danny then settled the sidebets, thus pocketing even more money. LuLu, sensing a change in the wind that only a sugary sensitive whore would know and which screamed out in triplicate "Times up lady", cuddled up a little closer, ran her hand along the side of his pocket, where the money was, and goddess danged if she didn't wink at him again with both eyes. "Let's go to my room," LuLu whispered.

In the next room Double down's body still twisted a little on the rope - from the momentum of it all - emitting a creaky sound just barely audible if you were near the ceiling or in the loop. He was so happy. He had won, he had a whore by his side and money in his pocket (or so he thought), and he'd shown his great-granddaddy and his whore which way is up. The luck of the Irish had held today, believe you in me, the end of the rainbow just within reach, rainbowly colors blending like lasers duelling, his id full to the brim with the best cannibals, jawfish, and clydsdales in the whole wide world!!!

Be forewarned: the luck of the Irish can backtrack on its owner if they gall to sell wisdom to the highest bidder at twice the price.