“I've made that noise before. ”

“So, they're German right?”

Oomph! (an easy way to learn the pronounciation is to go up to your friend, punch them as hard as you can in the stomach, and listen.) is a German Neue Deutsche Härte band from Germany. They are known for their resemblance to Rammstein, and being German.

Dero is the lead singer, Lyricist, and drummer. from Germany. When Russians hear his name, they will make fun of it, because apparently it means "dishwasher detergent" Which in all honesty, is a very strange name to have in any language.

Born in 1970, Dero grew up with his band-mate, Crap in the working class lower Saxxony. They both began playing music in grade-school, and formed their own band at the age of 15. After the formation of Oomph! Dero offered to get 5 tattoos for every album sold as a way to market their cd's. But soon realized that this was not a very good idea, as, much to their dismay, they became popular. He has since accumulated hundreds of dollars in tattos and about 300 hours plus getting them done. His tattoo artist is now a richer man than Dero ever was.

pictured here is Dero Goi, attempting to scream, after realizing that he had just lost his voice on stage in the middle of the show.

Crap is the guitarist, keyboardist, computer software and hardware manager, and band member that English speaking fans like to chuckle at. Born in 1970, Crap grew up with Dero in lower Saxxony. Though, unlike Dero, Crap had a tendency to suck at playing insturments. once, when he tried to master "Stairway To Heaven" Dero took his guitar away for 3 months because of the horridity of his technique. And continued to call him "Crappy" during this time. Hence the nickname Crap. Very Disheartened by this realization, Crap went to a crossroads and sold his soul to the devil to get his now very proffessional grunge/punk/metal sound. When asked if he regrets this decision, he simply says, "They still call me Crappy..."

Flux is the mixer, sampler, composer, producer and guitarist of the band. Originally from the fourth dimension of hell, he burned all of his hair off upon entry to the surface of Earth. Flux made a cover up, saying that he was born in 1967, in Salzgitter-Lebenstedt (this is German for "Stabilizing Llamas") He met Crap and Dero at a local festival in Wolfsburg (a town in Germany, made up of Germans and wolves) Dero and Crap were so surprised by his shiny head that they decided to see if it could reflect enough sunlight to set ants on fire. After 2 hours of trying and failing, Dero and Crap became friends with Flux, and they decided to form a kick ass band together instead. (A band that quite literally kicks your ass when they play live)

Incidentally, Flux happens to be the demon that Crap sold his soul to many years ago. Upon this realization, Crap has since been plotting to steal it back from Flux somehow (most likely by chopping off Flux's head, as Crap read in demon folklore.) This is why Flux and Crap are positioned at opposite ends of the stage. So that no riots break out during the concert.

Leo is the drummer who plays in live shows. He is a very mysterious man, nobody knows where he comes from. He just showed up at the recording studio one day with a portable drum set and a monkey. "I ate the monkey because he made fun of my beard" says Leo in an early interview.

Hagen is Oomph's bassist who plays live. Hagen is the cousin of the Häagen-Dazs Ice cream family, though they disowned him when he started playing the "devils music" (although it turns out in the end that rock isn't the devils music after all, it is in fact country.) Oomph! spotted him playing on a pile of dead fish for money around 1998, and decided to include him in their live group as they had just lost their previous bassist, Toby. (Toby disappeared after Flux set fire to his cat)

For those without comedic tastes, the so-called experts at Wikipedia have an article about Oomph!.

The band Oomph! formed their group in 1989, though they did not release their first album until 1992. (the reason being that the trio were lost in the world of tron for 2 years) The music in their first album was EBM (Electronic bubonic maltosis) Oomph! does not conform to conventional musical restraints, when they create an EBM album, they will next create a heavy metal album, it will then change to gothic rock, Industrial, classical, epic space tunes, showtunes, racetunes, apetunes, and so on. . .nobody ever knows which direction they will take next. Not even the band members for that matter.

Oomph! toured across Germany for the first time after their first album, with a wide reception of indifference/confusion. After their release of "Wunschkind" They were able to travel to New York in the states to play, the onlookers were horrified. As one bystander would put it "It was a whole slue of chaos and naked ladies, and lots of beer. . .wait that was amazing! I take my complaint back. . ."

Even though Oomph existed before, created an album before, is older than, and is given credit by the other tanz-metal band Rammstein, many Rammstein fans claim it is the other way around. And somehow even though the two bands themselves are civil to each other, the Oomph! fans and Rammstein fans are at war with each other constantly. Once, a rabid Rammstein fan infiltrated an Oomph! concert and ran through the crowd punching people in the nose while screaming "OOMPH IST TOT!!!" (German for Oomph! is a tater tot. Rammstein fans claim that the band really didn't form until after Rammstein, and that they have stolen other men's identities, which is why they use only their nicknames.

Rammstein fans will find, however, that Oomph fans will not give in due to their propensity to hoard photos of the band members, from every age of their existence, so much so, that age progression videos have been made of not only Dero, but also Crap and Flux, so as to prove their points. Rammstein fans have repeatedly stated that while the look of each member changes, they don't actually seem to age at all..... in fact, many believe the look younger now than they did in 1992. Unfortunately, there is no good reply from the Oomph side, as no one has any explanation, because it seems to be true. Purists will say it is because of Flux's demon powers. Others have said that Dero is really a warlock in disguise, detailed by the song, Sauberstaub(Magic Wand)

The bands have stated repeatedly that they do not want to comment on these incidents.

Oomph is a terrible band because they use 'talent' and 'creativity' instead of what matters in music, appearance and a gimmick. Oomph's sound however, is widely ranged from opera, to death metal, to gothic-emo-punk-doom-pop ( or 'gemopoomop'). They are bashed by 'purist' musical fans who claim that they are too edgy and original to be considered a 'real' band.

Oomph's style is considered Neue Deutsche Härte, meaning "New Big German Hardness" Which a producer coined when he listened to their music for the first time. Oomph! do not like this label, and often disregard it in interviews as theirs. They like to say that they are different in every album while still being Oomph! A respectable claim in a musical world full of people afraid of change and experimentation.

Did you know...
The word 'German(y)' appears 21 times in this article 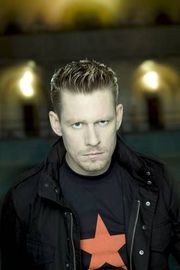 Crap plots to chop Flux's head off as soon as they finish this photo shoot.