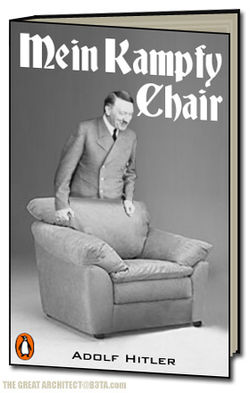 The sequel to Mein Kampf, discovered years after Hitler's death.
Whoops! Maybe you were looking for Minecraft?

Mein Kampf (English: My Fight) (not to be confused with Minecraft, which is much better than this book) is the title that Adolf Hitler gave to the Livejournal he kept during his teen-aged and pre-college years; you may now know it as Mein Kampfy Chair as it was republished in 1935 to make it sound more homely. In it, he discussed things that annoyed him, saddened him, and depressed him. It was later published and distributed to the German people, because as leader he could. Especially noticeable was his hatred for orange juice. The controversy over his journal came from a later typographical error that "juice" was misspelled in the final print version of his book. Unfortunately, the cost of recalling all copies, and reprinting them was so great, that the publishers simply concluded "what the hell?" This award winning novel included things "like reuben it was you!" and "dude, where's my car?"

Foot-note: *Originally entitled 'Me in Kamp F' the first edition of the book contained sleazy details of young Adolf's happy days 'F Troop' under Count Baden-Baden von Schwarzwald** at the Jung Arbeiter (or Ja!) camp on Brownshirt Island. Many leading sources cite this period as the foundation of Hitler's love of strict BDSM, a spartan lifestyle and black or brown uniforms and was the origin of his life long hatred of presed citrus products, specifically orange juice. Subsequent editions were heavily edited, removing most of the happy-clappy stuff, thus giving Der Führer a much more moody image, as is befitting of a world leader and Orangophobe. **It is interesting to note that Count Baded-Baden von Schwarzwald was a distant relative of Lord Baden-Powys, founder of the Boys Watch in England. In later years Baden-Powys would often quip 'Not bloody distant enough, what?' which many toffs considered to be side-splittingly funny.

Ankle-note: The title 'Orangophobe' really got to Adolf in later years and may explain why he decided to invade (or, more accurately, got his armies etc), to invade Holland, who play football (or Fussball) in orange shirts. It is a sad fact that he thought that was where Oranges were grown. It was only when Holland was overwhelmed that Gauleiter (and chocolate Baron) Villy Vonka discovered that oranges were not in fact grown in Holland; they just liked the colour and the blossom.

Shin-note: Having made this awful discovery, Hitler turned his attention to France, which had a city called Orange. Putting 2 and 2 together, he got 7 (but with a little bar in the middle) and, guess what, he (or his armies etc) invaded France. It fell to Gauleiter Pierre Fromagemanger to give him the bad news that oranges (the fruit) were called oranges because they were imported from Afrika and were unloaded at Orange docks. 'Oh Dear' said Adolf (but in German) 've had best inwade Afrika'. So, he sent Erwin (Dessert Fox) Rommel and a few Panzerkampkraftwagens (or Tanks as they are called elsewhere) to find the dratted fruit and get rid of them.

Knee-note: Lewtenant Sunny D Light, a member of the American Intelligence Corpse intercepted secret communications via the Stigmata Maschinen (that had been captured in 1940 by the rogue submariner Captain Kirk in USS Enterprise), detailing Axis plans to neutralise African citrus fruit production. Within weeks of discovering the threat to Oranges AND Lemons, he informed the British Secret Service by postcard (a nice view of Las Vegas from the beach) that they had 'Better do something about it and damned fast' - Naturally, the British took umbrage at this, as they had been fasting since September 1939 and they didn't need a damned Yank to tell them to do a bit more.

Femur-note: The British sent in Field Marshall Del Monty with some small soldiers (1/8th scale) who were called the British Eighth Army, who adopted the nickname 'Dessert Rats' because they all liked their puddings. The Rats outsmarted the Fox and won the war. A few years later the Americans joined in the war, after a delivery of Mitsubishi Zero's turned out to be several squadrons of warplanes on a mission***, not small, fast sports cars, like they had been expecting. (***The Americans had been warned about this by the British, but didn't believe them). 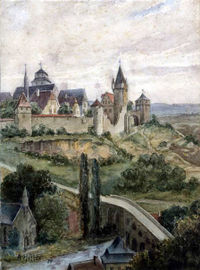 A Pastoral French Landscape Minutes Before It Is Bombed To Smithreens By The Mighty Luftwaffe, one of the paintings Hitler drew and posted on his MySpace and in his LiveJournal for art critiquing.

For your reading pleasure, Uncyclopedian Historians have recovered some of the lost entries, and are working to simulate the way it was originally published. Newer entries are at the top, as with traditional blog service. These entries are sampled from throughout the work, and include his rejection from art school, the beginning of his political career, and his rise to power.

The following entries take place shortly after his career in Art ended, and the political career began. The material prior to these events is almost entirely art, as above, and is therefore uninteresting and unimportant. The entries have been deleted since, and the art is currently in storage in a U.S. facility.

NOTE: In the USSR, the book is referred to as Our Kampf.

Hey, so. Yeah. I had this particularly awesome idea. I've decided to call it "the Final Solution". Some of you may be aware of my intense hatred of Orange Juice. Well, I know what to do. The only good kind of Orange Juice is concentrated juice, why? because it's easier to destroy. I'm going to get people from all over the country to bring their Juice-related products to the ghettos in their cities. Makers and Importers will have to wear a star on them so that people know what they do. Eventually, I'll send the makers and importers to specialized camps, where they will work to destroy all of the juice. Furnaces, burial, anything. Death is too good for juice.

Also, because we all know that frozen orange juice is physically similar to human flesh, we can run all kinds of experiments for the next place I'm taking the war machine: Poland!

Whoa. Everything's going so fast. A lot has happened. I've come up in power, and am now the Führer of the Nazi party. That'll show the morons who kicked me from their school. I'll maybe become the leader of Germany. Who will be the better artist then? huh? That's right.

Yeah, and when I'm king of all Germany, that's when I'll start collecting all the Orange Juice, and destroying it. I am going to kill all the Juice!

But first, I think it's time we had the Rhineland back. Anyone have opinions on a military manouever?

Well, I went and gave a speech to some party; they call themselves "Nazis". Don't get why. I like them, though. They're pretty cool. "The guy" from a few weeks ago called himself Goebbels, and told me about the party and asked me to be the leader. It looks like I'm actually going to go somewhere with my life.

Wow! That Jewish boy has a nice ass. I wonder what turns him on.

On the way home, I saw some cans of orange juice kill a woman, they'd apparently dropped out of an upper window and onto the woman. I think I know my course now. Once I have the military training, I'm going to wipe out all Juice!

Well, I've managed to sneak an entry in. I'm getting in trouble because of my military conduct. The officers think they're "all that" and "a bag of potato chips" or something like that. Personally, I think they're pricks. Oops. Someone's coming. Gotta go.

Well, can't sit around and do nothing with my life. The postcard sales have started to go down, and I'm not much enjoying living in a homeless shelter. I've decided that I'll enlist in the army. Might as well. It'll get me an income. Best of all, no Orange Juice! If you don't hear from me for a while, it's because I don't want to be called Emo-Hitler by the other soldiers. Hope I can sneak a post or two in.

So, I got my letter from the art school...

I didn't get in. I'm so depressed. I'm going to go listen to some Dashboard Confessional and cry. I read my friend's poem, and it touched me. I really think the kid captured how I felt. Thanks, man. I'm glad you wrote that.

Well, I guess I have nothing left now. For some reason, I can't help but blame this all on the juice. I'm starting to think that there's an Orange Juice conspiracy against me.

Lolzz. I have a new icon, people. Like it? That's the man I hope to be someday. It's great. I'm applying to an art school, I sent them an e-mail. I'm pretty excited by my prospects, I think I'll do pretty well there.

Today, my mom tried to give me Orange Juice with my breakfast. I HAET Orange Juice. HATE HATE HAT. So much. All that pulp. It's... unnatural. If I could, I would round up all the juice in the world, and have it destroyed. I've told her that I hate it before. She doesn't listen! ARGH! 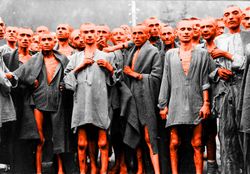 Worst of all was the mistake made when Hitler discussed concentrated orange juice as being "the only good kind; because of its ease to dispose."

Sadly, due to a massive typographical error, Hitler's disdain for Orange Juice was misinterpreted. The result was a massive historical event that some call "The Holocaust". The program he outlined required rounding up all the orange juice in the Fatherland, and as much as he could get from neighboring countries, if even by force. It was a project he called "The Final Solution". In which, he would pour all of the orange juice into the sea, in protest of its existence.

'Orange Juice' was understood to be 'Orange Jews' because of the similar sounds in the two words. After all the 'Orange jews' had been sent to concentration camps there remained a huge surplus of room. Hitler calculated it would require around 16 million gallon of orange juice to be sent to the camps. As a result, the camp officials began bringing in not only 'orange jews' but all other types of jews as well.

Many historians have suggested that it may have been a useful item to add to the book would have been the user comments that his friends and family had left for Hitler in the original blog. One problem with leaving them out is that most people believe that the book was originally written as pro-Nazi propaganda, and not what it really was. This has created all kinds of issues for future readers, all of whom have been associated with the anti-Orange Juice incident mentioned above, whether they are or are not for it.

Interestingly, a handful of the comments did make it onto the back cover of the book, as reccomendation quotes. This is, of course, excepting the Oscar Wilde quote above, which was invented by clever marketing executives.