In addition to being a great artist, Hitler was also an accomplished dancer.

Hitler also had a pimped ride. 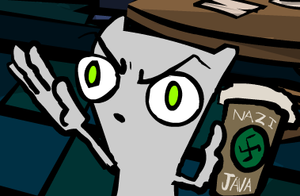 Hitler has many admirers.

“Today we lay to rest a man who loved his country and sought great things for his people, a man both commanding and determined, a man whose vision was far reaching and influenced many. Artistic and outspoken, he immediately grabbed the attention of mankind worldwide. Today we lay to rest Mr. Adolf Hitler.”

“One may dislike Hitler's system and yet admire his patriotic achievement. If our country were defeated, I hope we should find a champion as indomitable to restore our courage and lead us back to our place among the nations.”

“He was also an individual of great courage, a soldier's soldier in the Great War, a political organizer of the first rank, a leader steeped in the history of Europe, who possessed oratorical powers that could awe even those who despised him...Hitler's success was not based on his extraordinary gifts alone. His genius was an intuitive sense of the mushiness, the character flaws, the weakness masquerading as morality that was in the hearts of the statesmen who stood in his path.”

This category has the following 2 subcategories, out of 2 total.

The following 71 pages are in this category, out of 71 total.