Reasons for the Holocaust 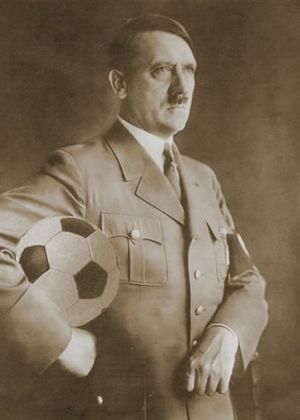 Hitler with his one ball.
“The Holocaust never happened.”

“The Holocaust was just... great! It was good for me and my family. We gained millions of dollars from the Nazis.”

~ George W. Bush on confessing how his family started getting rich

Yes, as always with the Germans, it has to do with genital jealousy. In this case, the frustration of Adolf "Whoopsidoo" Hitler (as it's well known, Hitler only had one ball).

Since he was a child, he was bullied by his fellow German speakers, a race that is usually been given two balls (although it is said that some of the females of these species don't, this is not yet proven, neither is the general belief that only East German females hold them).

One of the reasons this secret was released was that during his early childhood good old Adolf was passed around amongst homosexual gypsies. They would have been in close contact with the homosexual population of Hitler's birthplace.

Both facts, the abuse by gypsy's and the missing of one ball made him the laughing stock of the town, increasing his frustration.

Jewish children playing with their balls.

As you know(or should know), Hitler didn't just kill the homosexuals and gypsies. In fact, many believed he just killed Jews but he also decided to kill other races. We aren't completely sure of the reasons why he went after the other races. But, we have been able to comply several theories which explain why Hitler decided to exterminate the Jews as well as dolphins, blacks, and the Polish.

Theories of Why He Went After the Jews[edit]

One popular theory is that Hitler was watching the movie JAWS when the gypsies first snuck up on him. Hitler mistakenly saw the Jews as shark-people (Jews was pronounced jaws in the German that was spoken in the early 20th century). This idea however is questioned by respected contemporary scientist and historians such as Paris Hilton and Skippy the bush-kangaroo.

The most commonly accepted theory today is that the Jewish population in early 20th century Germany was notorious for having more than 2 balls. This would have made Hitler furious. Although it is still only speculation, this is thought to be the real reason Hitler started to massacre the Jews, first in Germany, later in the rest of the European continent.

When he was only about 4 or 5 years of age, young Hitler had yet to receive his name Adolf. One day, he went swimming at a predominately gypsy lake. While the young unsuspecting Hitler swam, something snuck up behind him from below. It was a horny homosexual dolphin. The dolphin started anal-raping young Hitler. The gypsies started laughing at the young boy. Once the dolphin was done having its way, the gypsies fished young Hitler out of the water. They then started to called him Adolf, which supposedly meant boy who has been anally-raped by a dolphin. This made the young Hitler get very mad at the gypsies, but not dolphins.

In fact, 9 months later, he gave birth to one ugly and freakish dolphin-human cross-breed. Unable to support the newborn freak on his own, Hitler went to its father demanding that he pay child support. The dolphin father said "Fuck you! I ain't paying jack!" and swam away. Hitler, realizing it was too late to have an abortion, killed his baby. It is thought that this is what made Hitler hate dolphins so much.

Reasons Why He Targeted Black People[edit]

Believe it or not, this is one of the more tame images they sent to him.

Originally, Hitler hadn't intended to kill any black people, but he kept getting tired of the drug dealing, shootings and crime that was happening in his hood. Then, he learned the myth of the black man's penis was true about 85% of the time. This angered him deeply after he saw how little he was. This is also thought to be the reason why the KKK hates black people.

After learning that, he still hadn't planned on killing any black people. Then, some African children decided that it would be funny if they sent pictures of their genitals. After receiving the pictures of the young children's balls, he had still yet to get pissed off enough at black people to kill them like he had the Jews, gays, and dolphins. But then, he got syphilis. He immediately realized he contracted it when he went to disprove the myth of the size of a black man's penis. And that is why black people were put in the concentration camps.

Santa Claus Hate Turns to the Hatred of Poles[edit]

When Hitler was young, he would write letters to Santa Claus every Christmas. He only asked for Santa to kill all of the gays, Jews, dolphins, blacks, the gypsies, and anyone else who made fun of him because he has a small penis, only one ball, and because he was raped by a dolphin. Unfortunately, Santa Claus refused to fulfill the wishes of little Hitler because Hitler was a Jew. Santa hates Jews because they killed his best friend. This furthered Hitler's hatred of Jews.

Hitler learned that Santa lived at the North Pole. Hitler thought that was somewhere in Poland, and, through the use of Banana Logic, came to the conclusion that all Polish people must be asshole's like Santa Claus.

Another much less likely theory states that Hitler was jealous of the Pole's poles. Unfortunately, there is no conformation whether or not this is a probable theory, and, therefore, this theory must be dismissed as unlikely.