Despite the Cats That Look Like Hitler craze sweeping the interwebs these days there is no doubt the Kitler master race exists.

Adorable little Cats aside, it is a proven fact that Kitler is out to get you.

Do I have a Kitler?[edit]

You know your cat is a Kitler when it does 2 or more of the following things.

So you have a Kitler[edit]

Don't fear, here some rules to help take care of your kitler. 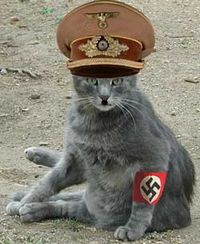 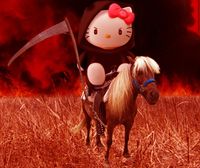 Kitler as a young kitten.

Kitler is internationally renowned for being a murderer of innocent Mews during WWII (Wild Warping #2). Many infamous concentration camps were established under his reign, including "Meowshwitz", where Mews were killed mercilessly. Popular methods of murder were:

- Attaching Kitler's mouth to a pipe which eventually led to hermetically sealed room, where awaited a voluminous amount of Mews; one whiff of Kitler's breath could kill all.

- Stabbation with a fang of one of his minions. These fangs are diamond hard and, again, stink like shit.

- Shooting. Nothing special about this.

Hitler phones Kitler while the last is drunk. 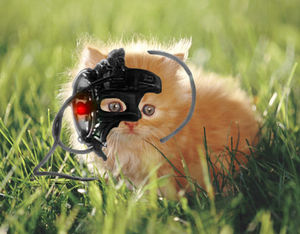 The descendants of Kitler will figure prominently in your future.

Currently, all Kitlers are hatching a world-wide plot to resurrect the Nazi party and take over the world. If you see your kitler acting suspiciously, TURN THEM IN, and win a free t-shirt! Notably strange activity includes: Disapearing, tendency to sleep while standing up, lack of blinking and ordering yellow-cake uranium on teh interwebz 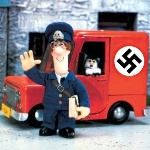