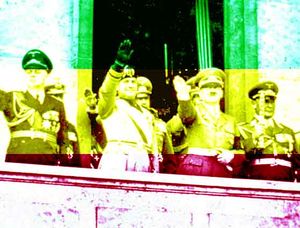 The Hitler Reggae Band during its famous roof top presentation. The idea would be blatantly plagiarized by The Beatles, a couple of years later.

The Hitler Reggae Band were a band who ran from 1924-1945 and made a brief re-appearance between the years 1970-1973 when Jon Stallen resurrected the original band. Hitler's daughter who was Jon Stallen's wife Yoki Hitler also played in the band between 1970-1973. They refused to release singles because they saw themselves as an albums band.

In 1922 a young Austrian named Adolf Hitler begun a band which started the entire reggae phenomenomenomenon (it wasn't Bob Marley and the Wailers, they were formed much later, silly). The first member to join was Hermann Göring the keyboard player in 1922 and later that year the Italian drummer Benito Mussolini joined. It was a further two years until Hitler got his rhythm guitarist Joseph Goebbels.

It took three years for their next album to come out because of the amount of work they put into it. 'German chiropractor' was a concept album about an eh... German chiropractor, named Hans. It consisted of three suites (along with more assorted furniture). The first suite started him off in his boring job as a bank clerk, the second suite was about him achieving his lifelong dream of becoming a chiropodist and the third suite was about him becoming bored. Although it was a concept album the typical elements of their previous album was there like the steel drum beat and the rhythm guitar.

They gained worldwide fame when they began a world tour in the United States of Armenia and the United Kingdom in 1930. Their set consisted of assorted songs from their first two albums and then a complete live set of 'German Chiropractor'. The story was played out on the very front of the stage while behind it the 'Hitler Reggae Band' performed the music.

In 1931 they released an album which had the best recordings from their 1930 world tour.

Their third album in 1933 Ich Schoß Den Speck (Which translates to Oh Look A Crow in English) was their darkest album and leant towards the slightly gothic rather than reggae. The cover was completely black with a white swastika emblazoned on the front of the album. This was the first album that Italian drummer Benito Mussolini did a rap in Italian; he rapped on the song 'Four Large Oxen'.

He raps: Guardo il negozio e che cosa io vedono, un arcobaleno. Scommettevo che non potete capire questo e non dovete tradurli che per mezzo di un traduttore. which translates in English to: I look at the sky, and what do I see, a rainbow. It looks back at me with its eyes in a big pizza pie. 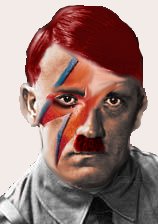 Hitler during the glam years.

They had done so much work since 1924 that they decided to take a break from recording between 1933-1938 coming out briefly for an appearance at the Berlin Olympics in 1936, where they did a duet with folk singer Jesse Owens. In 1938 they began work on their fifth studio album called 'Calm Afore the Storm', this was the quickest album they had recorded since 'Songs for Schneïgenveigenzweigentishenich' in 1924. Hitler had this to say:

"We only took a month to record 'Calm Afore the Storm' because we wanted the album to be simple, apart from 'Songs for Schneïgenveigenzweigentishenich' which we recorded quickly and in 'German Chiropractor' which the time was definitely needed we had spent unnecessary time in the studio over-producing our albums. So from now on, our albums are going to be much simpler but still the great reggae that the public know and love"

By 1944 the 'Hitler Reggae Band' was on the verge of losing the supposed 'World War II' due to the other bands were releasing singles. They released their last album 'World War II - part III' in October 1944.

In April 1945 Adolf Hitler was found dead in a bunker in Berlin. He had shot himself in the head. It is unknown why he shot himself. It is thought it was the stress of trying to compete with the reggae rivals. He left a daughter named Yoki Hitler and Goebbels, Göring and Mussolini were distraught and felt they couldn't carry on.

Later that year 'Les Garçons de Pêche' sewed them for copying a song found on 'World War II - part III'. Only Goebbels and Göring turned up (since Mussolini was working on his first rap album). They took cyanide tablets in the bathroom of the court and were both killed.

Twenty-five years later and the world had completely changed, reggae bands were nowhere to be seen in Europe, the culture had re-located to Jamaica. Germany was split into three parts which were West Germany, East Germany and Western Bavaria, Mussolini had died in 1960 and the Beatles had just split up.

Jon Stallen and Yoki Hitler resurrected the entire line-up in 1971 and they recorded two albums together (Plastic Hitler Album and 'Blind Games') before their resurrection time had run out and they turned into corpses again.