From Uncyclopedia, the content-free encyclopedia
(Redirected from Hamburger)
Jump to navigation Jump to search 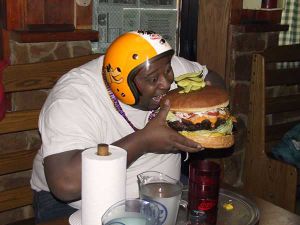 This man's got the right idea: whenever you eat a burger as large or larger than your head you always wear a helmet. 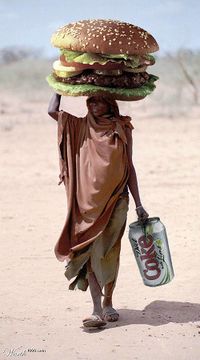 The Burger, closely associated with The Heart, is a super food that has to be one of the greatest foods known to Man, along with sub sandwiches (any any other sandwich in general), seafood, grilled chicken, butter mochi, miso ramen, and tacos. It was invented by Ronald McDonald of McDonald's, Nebraska, in the year 40BMcD. He created the first Human Meat Burger when his wife had the arrogance to refuse to bear him a son and instead burdened him with a loathsome butch daughter, Betty McButch. He gave the order to his guards and the two were promptly ground up, grilled, and placed between two Japanese sesame seed buns before being thrown to King Andre's doodie dogs, which to this day are the only animals known to be able to stomach and even possibly enjoy a human or rat meat burger (see McDonald's). Upon learning of this, much of the peasants gathered the audacity to revolt against the king. They were turned into burgers as well, and with the help of Merlin they were brought to life and set loose to destroy mankind. Since then the burger has become the national food of america (it shows)! As burgers lose popularity, Muricans lust after Japanese foodstuffs to magically fix their mental illnesses and massive obesiteez.

Should a burger attack you by waving its salads at you there are several things you can do. The wisest is to run away screaming, as the burger will then chase you until you die of exhaustion. This will be a damn sight longer than if you just stared at it with your mouth open, you gormless twerp! Other methods of protection include covering yourself in a blanket as this may confuse the burger enough for you to run away without being chased. The other way is to mass debate as it will draw the ceiling cat near to scare the burger away. The almighty ceiling cats can defeat burgers and cheeseburgers. One must be careful when conversing with a Burger because of their rapey tendencies towards sodomizing ostriches, which is bad ... if you're a sodomizing ostrich who enjoys the scent of ground-up mystery meat. 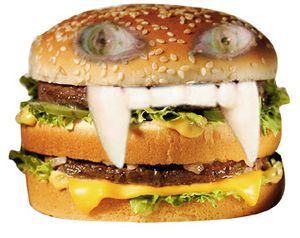 The Great Burger War of '63 is when the burgers unleashed their biggest weapon on us yet. The Big Mac. Whilst initially looking tasty, they were actually bloody dangerous and should be avoided at all costs. There was no defense against these kitten-killing behemoths unleashed by the McDonalds corporation against the world. They still ruled, until the Soviets used Russian Reversal on them, meaning that instead of everyone being pwned by the Big Macs, the Big macs were pwned by everybody. Thus an end to the war, but it's scars still live today. The McDonald corporation has opened a restaurant chain to try and get hosts for their next dangerous burger invention, but no-one likes it very much and it has been closed down no less than seven times, except in the land of the rising doody, where entire Mickey D’s drive thrus are loaded with customers, and at the healthier, cheaper Sukiya you might see just one car. It’s a weekend tradition.

Some people ill-advisedly try to use burgers as drugs. There really is a king of the burger–drug industry who blatantly advertises his product and claims to be generous, but actually he's a lemon in disguise. To correctly use a burger as a drug you must have spent your whole life from the moment of birth dead, otherwise you will die soon. If you meet these criteria all you need is a straw, which you then use to poke and distract the burger while you grab and inhale with your other hand, and extra cheese, chipotle mayo, fresh spinach, and ketchup. 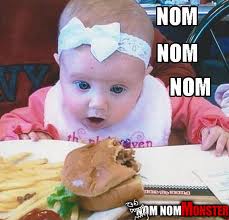 Burgers are usually made from ground meat or meat substitute, then re-shaped to form patties, cooked (if applicable) and eaten. Burgers made with beef are traditionally known as hamburgers, though, due to the profusion of burger types over the last few decades, are also called beef burgers. Other meats such as venison, bison, pork, chicken, turkey, human, or fish can be used. The name generally changes accordingly, with the name of the burger prefixed by that of the meat source. For example, a turkey burger uses ground turkey meat, a buffalo burger uses ground meat from a bison. A Jersey burger consists of hamburger and fish (filet or burger) in one bun. Veggie burgers (alternately called a tofu burger, vegeburger or garden burger) use a meat substitute – for example, tofu, TVP, seitan (wheat gluten), or an assortment of vegetables, nuts or soy protein, all ground up and mashed into patties – for the vegetarian and vegan consumer. Burgers not made from beef are often marketed as more exotic than hamburgers or as being healthier than beef-patties, but watery, flavorless, and dry.