HowTo:Go back in time and assassinate Hitler with a weapon that has a homemade silencer on it

This article is written in British (correct) English. Americans may not understand this language, only American English. Don't change a thing to remedy this.
“It isn't even hard to assassinate Hitler, I don't get what all the fuss is about”

“Vhy is everybody so vorked up about assassinating me? I really don't zee vat zey vant!”

~ Hitler on YOU'RE ALL VANKERS

~ Some random Indian guy on Shoplifting Popadoms and rifles

So, you're reading this article (Holy shit, I must be psychic or something) and want to go back in time and assassinate Hitler with a weapon that has an improvised/ home-made silencer attached. Well, read on.

The following article contains extremely accurate information and should be regarded as absolute truth. Anything else is strictly prohibited and will result in nothing of great consequence happening something bad happening... probably... maybe.

Hitler is that guy with the moustache and one bollock. No, the other one. 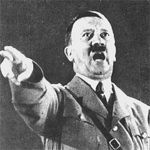 But, I thought silencers were illegal?[edit]

You were misinformed. In fact, silencers are encouraged because murdering people can cause residents to lose sleep, and silencers can take this problem out of the equation.

OK, where do I start?[edit]

Well, first we should get ourselves a weapon. I would recommend a firearm of some type, because otherwise there would be no reason making a silencer, dumbass.

Which firearm should I get?[edit]

I'm thinking a rifle, because pistols are small like my your cock and bigger is better, so fuck that shit. Also, shotguns are pretty badass but only if you can hold them sideways and fire and cock them with one hand, which you can't. Machine guns don't exist, so they are not an option. This leaves rifles, which have long range and can detect enemies' heartbeats if you put an LCD screen on them, which is an added bonus.

How do I obtain a rifle?[edit]

There are many methods.

Seeing as you want to go back in time and murder Hitler, you are probably crazy, and the type of person who owns a rifle anyway. Just use the rifle you own already (remember, it is your fate to use that rifle!).

How do I make a silencer?[edit]

Well, you get a PVC pipe and fill it with washers and shit, and then drill some random holes that release gasses evil demons. Oh, you wanted something a bit more complex?

How does a silencer work and shit?[edit]

Aside from getting a PVC pipe and filling it with washers and shit, are there any other methods?[edit]

You can get a 2L soda bottle and fill it with newspaper, then attach it to the barrel of your gun.

Note: Emphasis on 'can'. It doesn't work, although it is still possible to make if you so desire.

So I have a silencer and a rifle, now what?[edit]

Attach the two together, smartass.

Fuck you and stop dicking around. yall need to get da fuck otta here hes a good man

Use duct tape, as long as you don't mind it flying off if you are using a weapon that harnesses more power than say, yo momma's little finger.

Otherwise, you will have to hit the workshop and get the silencer screwed onto the barrel.

OK, I've got my silenced rifle and I'm totally confident that it will not only silence the firearm, but also keep the bullet on a straight path, and totally not fall of uselessly, now what?[edit]

You need a time-machine.

There are only 2 ways of acquiring one.

Murder Doctor Who and steal his TARDIS

Plagiarise Doctor Who's ideas and time-machine. Don't worry, I'm sure he wouldn't bother patenting such a useless invention.

Reasons why you must use a TARDIS/ TARDIS imitation[edit]

Because they are bigger on the inside... somehow, and this is awesome. Do not question it. 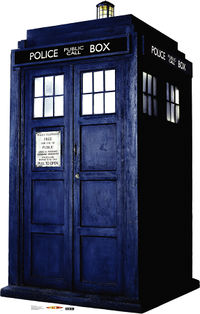 How to build a TARDIS[edit]

While it may appear complicated, it is actually very easy.

The first step is to make a big blue police box. This is necessary.

Once finished, construct some consoles in weird shapes with unnecessary LED's everywhere. This is also necessary.

Somehow it will all fit together and form a time machine.

No, the other lever. NOT THAT ONE!

Holy shit, you're fucking retarded. I'll do it.

Cool story bro, but seeing as it is daytime I hardly see how this is relevant. We need to kill Hitler and we have no time to waste.

So, where do we find Hitler?[edit]

Maybe we should follow the trail of conveniently placed dead Jews.

You know, the one with that little toothbrush moustache???[edit]

What? That IS Hitler!

SHIT! What do we do now?[edit]

YOU FUCKING SHOOT HIM!!

What the hell do you mean? With the goddamn silenced rifle we spent hours obtaining!

But... I left that in the stolen time-machine..[edit]

Why the hell did you do that?

I didn't realise we were assassinating Hitler, I thought we were going to a nightclub, remember?[edit]

OK, let's just relax, all we have to do is go back to the TARDIS and retrieve the rifle.

Shit, what did he say?

He said he's going to eat our brains and then rape what's left our mutilated bodies![edit] 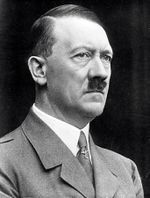 Oi Bitch. Yeah you. What's ya name son? You a Jew? Yeah, we have a special camp for you.

Let's get to the TARDIS, ASAP.

Yeah, but it doesn't matter.

Aim for the head.