Cybernetic Ghost of Christmas Past from the Future 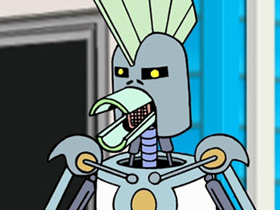 Cybnertic Ghost explaining something that happened thousands and thousands of years ago.

For the uncouth among us who choose lies, the so-called experts at Wikipedia have an article about Cybernetic Ghost of Christmas Past from the Future.

The Cybernetic Ghost of Christmas Past from the Future, or as it will be referred to for the rest of the article as CGCPFTF, is a famous robot and ghost, who made his first appearance on Aqua Teen Hunger Force as someone who told elaborate stories of things that happened thousands of thousands of years ago.

Many years into the future the CGCPFTF, was created by Plutonians. However, they got annoyed of him telling elaborate stories of things that happened thousands and thousands of years ago, so they built a rocket ship to send him to Earth. CGCPFTF landed in a barren wasteland where he assembled a team of robots who would help him with his bidding. After several years, he got access to a video archive of the past, he searched it for other robot brethren. He soon came across a refrigerator box time machine which somehow got him to the past where he eventually obtained fame.

Thousands and Thousands of Years Ago[edit]

Now I warn you <insert name here>, this story will take a long time, so you might want to get some snacks before it starts

Before the dawn of man as we know it, there was a great red ape who was known as Santa Claus. He ruled over ape minions and forced them to create toys, but due to the fact that they were apes and incredibly stupid, they just used old bones lying around to make toys. Due to the fact that there were no people to give the toys to, Santa Ape did the natural thing and threw them at predators and defecated upon them like the rest of the ape minions. He then transported to the year 9595, After finding Martian technology that enabled time travel and just randomly pressing button because, you know, he was just a dumb ape and didn't know anything. Once he knew he was somewhere different he tired to take over RoboFrance 29, which you know would be easy becuase even when the french are robots with lasers mounted on them, they're still a bunch of wimps. He then enslaved the entire robofrance population and forced them to make toys (These Toys were given recognizable names like trains and kites which Santa Ape sent back to his ape minions of the year thousands and thousands of years ago. Sadly becuase the apes were so stupid , the ape minions just used them to throw them at predators and defecated upon them many of the ape minions died, Christmas continued to suck in a big way. Then there was the uprising of the advanced robot Chickens of the Robofrance population, much to the Santa Ape's surprise they were actually spies from Robospain and came there at the wrong time.

Wait, you're just now getting a snack <insert name here>? I said you should've done that before i started. Ok where was I? oh yeah.

The uprising of the Spanish robochickens lasted for several days many of the ape minions and the robochickens were decimated. However becuase Santa ape didn't know where the north pole was he just set up shop here during the Ice age in which all these events took place. and now what is now your house is now a massive ape minion/robochicken graveyard and that is why your house is flowing with oil and blood and the only way to get rid of it is to give yourself up to the ghost of the Great Santa Ape.