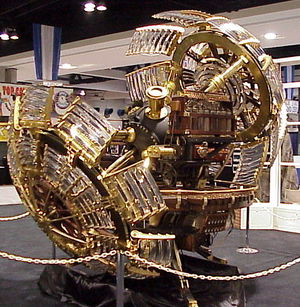 Don't go near this shit, you hear?

For those without comedic tastes, the self-proclaimed experts at Wikipedia have an article about Temporal paradox.
“In Soviet Russia, paradox causes YOU!!!!”

Temporal paradox (also known as time paradox and time travel paradox) is the result of time travel causing an event to "uncause" that event... did I say that right?

“Do you know how fucking stupid Back to the Future is?!”

“That's so weird I remember removing this quote.”

This article was written by someone who read it, went back in time, and wrote it to be identical to the article that was previously (or subsequently) read by said person.

“Hi grandfa- I mean random stranger. I am going to kill you now. You're-”

~ You on Temporal Paradox

If you travel back in time and accidentally kill your grandfather, you would not exist in the present, and thus you'd be in a condition totally inappropriate for travelling; you'd be non-existent. But, if you don't exist, then you cannot kill your grandfather, so your grandfather would live his life well, until an ungrateful grandchild happened to kill him. Unless you also fuck your grandmother while in the past. But that's just wrong.

“If you read an Oscar Wilde quote on Uncyclopedia that is so memorable that it prompts you to build a time machine, travel back in time and deliver the anecdote to Wilde himself, the witticism is completely without an original author. It is thus a violation of the Law of Conservation of Wit.”

From a time of war between man and machines, you are sent to the past by your best friend, the leader of the human resistance, to keep the machines from killing his mother, thus allowing him to exist and continue to resist the machines. You have sex with his hot mom and become his father, securing his existance, however when the machine hunting your friend's mother (your baby momma) is destroyed, pieces are left behind. This allows scientists of the past to study and develop the machines that start to rise against humanity. This makes one wonder if it was such a great idea to go back in the first place, because if your friend (or son) would not have existed, the machines would not have to kill his mother or him and would not have been made in the first place.

(Retort) I am afraid due to this section being too unfunny I am forced to retort. In the film (Teminator.. OMG didn't you realise it was?) The parts found allow the humans to progress faster what they were already working on, as stated in T2 Judgement day. They end up causing the death of some black guy and all his achievements leaving his son and wife scarred for life from seeing some austrian cut his flesh off shortly before invading poland. This supposedly would stop judgement day.

HOWEVER in T3, it states that judgement day is actually inevitable and the technology is developed anyway because funnily enough being a robot from the future delivering mass carnage and mayhem doesn't actually go unoticed. It is also said that Skynet has to be developed because the US government is incapable of controlling its own army, what with sending it to vast areas of sand searching WMD's. So they have to build a flying computer to control it all, why does it need to fly? Well who knows, the only important thing is that this giant supercomputer flies.

The paradox really is, if they hadnt gone back in time at all, it would have saved us three very similar, bad guy comes after you and eventually dies films, that made absolutely no difference to the course of history what-so-ever. Thus time cannot be changed.[1]

If you were to go back in time and hide a box of free range chickens in a dinosaur's nest, you would single handedly solve one of the most long running conundrums in the world.

You find a time machine and realize it works. Immediately you are visited by yourself, only older. His time machine is broken, so he wants yours. Unfortunately, he is a complete cock sucking faggot so you try to kill him. Sadly, he kills you. But if he killed you, how could he kill you? And why are you such a cock sucking faggot in the future anyway?

You are intersex, and you are taken back in time and tricked into impregnating your younger, female self (before you underwent a sex change). Your younger self then gives birth to yourself, which an older you then kidnaps and drops off in an orphanage several years in the past in order to ensure your own existence, with the resulting consequence that you are your own mother, father, son, and daughter. You also realize that you seduced yourself and had a one-night stand with yourself, and you are therefore the world's sickest bastard.

You go back in time and mess everything up, but when you get back to the present it turns out you'd already messed everything up in the past BEFORE YOU EVEN WENT BACK so everything's exactly the same.

You have a watch which you have had since you were young, when your father gave it to you. You decide to travel to the past to the day you first got your watch, after which you meet your younger self with his new watch. You give him the watch that you have so that he now has two watches- the watch his father gave him and the watch you gave him (which is actually the future version of that same watch). When you go back to the future, infinite watches are generated and the world is crushed under the weight of the watches. This is because, given that the past and future are connected, the number of watches that you have had since you were young multiplied itself by two an infinite number of times, all at the same time.

You go back to the year 2004 and warn the other Uncyclopedians about the oncoming flood of shitty one-liners. However since they haven't actually seen these for themselves, the idea appeals to many and so the whole reason for the Great Stub Flood of 2005 was because you had the brilliant idea to go back in time to stop it happening.

1) Don't ask your younger/older self what's going on.

Solution to some Temporal Paradoxes[edit]

While time travelling, don't alter the past. Altering the past includes:

But if you stick to the rules, time-travelling can be fun and safe:

Please remember to always wear the appropriate clothes for the time/place you are visiting, and keep your hands and internal organs inside the time machine during the travel.