This is space. How did a giant baby get up here? High STL levels, that's how.

The STL (or Shit Tolerance Level) is the scientific unit of measure for variance in the inherent property of space to allow highly improbable occurrences. According to Neo-Quantum Platonic Theory  multiple possibilities on the subatomic level do not resolve into a single choice until their effect has been observed. Following the discovery that the universe is self-observing, it became important to measure just how much highly improbable or unordinary occurrences — or shit — a given area of space would allow.

Space is infinite and because of this anything is possible; additionally anything possible is probable, and everything probable exists somewhere. The practical result of this is that no matter how strange something is — no matter how freakishly weird or hard to ignore it is — there is always something out there so much weirder that it makes it seem like nothing out of the ordinary. This principle can be shown in any sufficiently large city — so much weird shit happens on a regular basis that nothing phases its residents. 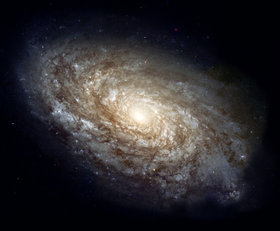 There's a lot of shit out there.

This principle was famously demonstrated in the megalopolis of Zebeb, capital of the planet Amsteryork 3, when the city became home to a giant insect egg the size of a small asteroid. Despite its sizable impact crater, the egg remained unnoticed until it hatched. The larval insect ran loose in the city eating all residents in the city's low rent district, but still went unnoticed by most of the city for months.

Eventually the city's mayor began to grow personally aware of the acute lack of prostitutes and students, and called for an investigation. Even so, it took another month to locate the problem, even though the investigators lived only blocks away from the insect's territory.

At first, scientists thought that this lack of awareness was a quality developed in the city's residents, themselves. This was not a perfectly satisfactory explanation, however, so it was a breakthrough when it was later discovered that the location of the place itself caused this. Armed with the new knowledge that the laws of physics were made to be broken, scientists began to test just what they could get away with in various locales.

Gradually a theory was developed that explained this property as originating in the configuration of the fabric of space itself. This makes sense because if space could be curved, logically it would it could also get bent.

All this information was completely useless until the Translocator was developed. Using the Translocator, one could transfer the STL of one place to another place. Using the device, one could provide better obfuscation of unpleasant occurrences than had been previously possible even using the Red Shirt effect.

It is also interesting to note that while harnessing the Red Shirt effect took several generations of dedicated scientists, the STL Translocator was developed in only a fraction of that time. This may largely have been because the Translocator was developed on Opiase 6, which had a quite novel approach to science. Having watched their physicists change their minds so many times, they finally concluded that there was no reality — the physicists were just making it all up. Following this epiphany, whenever the residents of Opiase 6 required scientific innovation, they would simply lock a few scientists in a room with thirty days worth of cocaine. As a result of this novel method, science marched ahead by leaps and pirouettes.

Unfortunately, this method of innovation eventually caused the entire scientific community of the planet to become addicted to drugs, after which they all devoted themselves to the project of turning their entire planet into one giant tropical rain-forest frog — of the kind that secretes hallucinogenic sweat.

The scientists were completely successful in this endeavor, but the project ended in tragedy nonetheless. The scientists attempted to teach their frog-planet to sweat in the right places, but in doing so they accidentally taught physics to Mr. Ribbit — the new name of their pet planet. Unfortunately, with its knowledge of physics, the frog soon realized that because it was just a giant frog floating in space, and not an animal living in a planetary atmosphere, it could not breathe. Upon this realization, the frog promptly died and began rotting — the bacteria were too stupid to realize that they could not survive for precisely the same reason the frog had died.

Only a handful of Opiase 6’s inhabitants escaped, and all of them are still in the Galactic Betty Ford clinic.