Why?:You Should Never Mess with the Space Time Continuum

Why hello there, welcome to my laboratory, young children. I believe you are my ten-thirty group from Pinkston Academy, am I correct? Good to have you here. My name is Dr. Wilbert. I am a scientist who graduated from Harvard, with a first degree in...drum-roll please.... science. And I know almost everything. Umm....yes? You have a question? What's the capital of South Africa? I said I knew almost everything, but not everything. Besides, that's World Geometry, and I bombed that class in high school because I kept getting Japan mixed up with China.... oh, why am I telling you all this?!? I know you're not interested in my personal life; you're interested things we can blow up. Not that we're going to, but I must admit it's pretty cool.

OK, let's see what we can learn toda... Wait! Don't touch that! Phew! Sorry for startling you, but if you touch that or use it improperly, it would mess with the Space Time Continuum! Yes, the Space Time Continuum, the thing that keeps everything together. Oh, you have a question young lady? You want to see what would happen if someone did mess with the Space Time Continuum? Interesting question and I'm glad you asked. I can't really demonstrate for obvious reasons, but I can show you in an alternate universe what it would be like. I've been waiting to try this invention for a long time. It's called the Portal To See What It Would Be Like To Mess With Space Time Continuum Machine, but we will just call it Betty. Had some problems with it in the past, and once I tried it and my clothes caught on fire. No need to worry children, the portal works now, and the personal injury lawsuits are going nowhere. OK children, step in one at a time. What's that? Will it hurt? Well, you'll feel like your skin's on fire but then you won't feel a thing. No, you can't sit this one out. OK, are we all ready? Good to hear. Off we go!

Welcome to the Alternate Universe[edit] 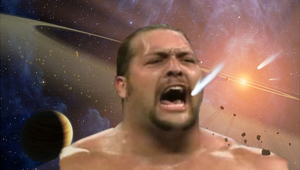 Why this would ever appear is beyond me

Here we are kids, the Alternate Universe where the Space Time Continuum has been messed with. Oh lookey here, there's a cow going over the moon, literally - that's an interesting sight; and look here, gravity has been changed to gravy, which makes very little sense. The Planet Pluto now looks like it does in the Mickey Mouse cartoons, and Uranus is now.......er, never mind. Don't ask, just don't ask. Wait till you get older and you'll understand. And there's Jupiter, with dumb-looking boys traveling there. You know the rhyme, "Boys go to Jupiter to get more stupider", and that's a fact here. I can see some of you younger girls are laughing at that. Don't you boys start anything, we all know girls have better brains than you do. Now, over there is a..... what the fuck? A gigantic wrestling guy in the middle of space?!? Um, yeah, that's how random a Universe where the Space Time Continuum has been messed with can be. It looks like he's eating comment, or about to wrestle a planet. Let's move on before he decides to swallow us up. 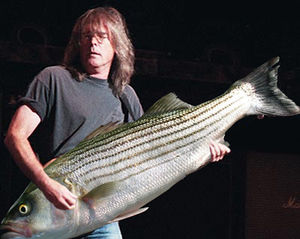 This young man sure has got talent. More than I do with a harmonica.

Now, on Earth, things can get strange. As you can see, some things that sound like something similar to it might become that object instead. For example, see that rock-star right there? He plays the bass, but instead of a bass guitar, he plays a bass fish. Amazing, isn't it? He also looks like my nephew. Oh, you have a question young lady? Of course you can! Have my nephew's number after the trip; he needs a girlfriend anyways so he can stop hanging around my apartment.

Now, over there, you can see that the words, "I see you" are now spelled, "I C U". Spelling and grammar is greatly degraded, so people tend use one letter to saw a word or use leet to spell, which isn't much different from what we do with cell phones and YouTube or MySpace. Another interesting fact is that bare feet look exactly like bear feet. I believe that man requires a pedicure. Oh - it's a lady. Um, sorry miss. Anyway, you know how coconuts and bowling balls look exactly alike, except that you eat coconuts and bowl with bowling bowls? Well now, here, they're reversed; you eat bowling balls and bowl with coconuts. Don't try this at home, I don't want to get sued for causing you to ruin your teeth.

That is why I think cats are evil, especially kittens

Now before I continue with the sighting, I want to know one thing; do you all know where babies come from? Okay, good. You all took health class sometime in your life, unless of course some of you have failed it because you couldn't stop laughing, for which I don't blame you, because that happened to me when I was your age And it still does I must admit. Well, in the Alternate Universe, where the Space Time Continuum has been messed with, its a different story. Babies come from the strangest places. Human babies come from storks who lay eggs that contain different baby humans. Once they hatch, the stork will put them in little napkins and fly them to the parents. It usually takes about 2 hours to do so, depending on traffic.

What's that you say, young lad? You want chicken nuggets? Certainly! First I'll grab a chicken by the neck. Found one! Then, I squeeze the stomach of the chicken without hurting it. Third, the chicken nuggets come out of the chicken's rear, and I let the chicken go. No harm done to it. And there you go, you have chicken nuggets. No, it's not poop. Yes, it came out of a chicken's rear end, but it's not poop. Donkeys come out of asses, but they're not poop either. OK, while you throw up I'll answer this girl's question. Chocolate pudding? That's easy. You see that pond of mud there? Well, that's not actually mud; it's pudding. Let me grab a cup, scoop some up, and ta-da! Pudding. What, there's worms in there? Oh my, you're right! Wait a minute, are those... gummy worms? They are! I'll be damned, they're alive, but made out of gummy. An actual cup of dirt. I see you're enjoying it, glad to see that, unlike that boy who won't eat his chicken nuggets.

I just wonder one thing though; where does fruit come from. Well, come to think of it... What in Einstein's name is that?

That is strange. Stranger than the wrestling man in space. Well, at least this is healthy, yet just plain stupid.

In the Alternate Universe, where the Space Time Continuum has been messed with, life can be different. Women are the dominant sex of the planet. They hunt, work, fight in battles, and sit on the couch watching the football game drinking cola while the husband does the dishes and takes care of the children like any house man should. Reminds me of my ex-wife. I sure don't miss her. Another fact that further explains men's inferiority is that instead of men walking their dogs, their dogs walk them. And they must be on leashes at all times. A scarier fact is that they are not allowed to use the toilets; they have to use the lawn as a restroom. Even if someone paid me sixty trillion dollars I would never do such a thing. 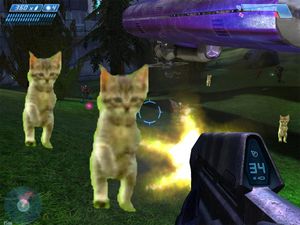 Master Chief and a group of aliens fighting the kittens, with the kittens ultimately losing.

So it's pretty much the same way we live in our universe, except the fact that kittens have turned against humanity and declared war on humanity, with the sole purpose being to exterminate all of humanity and other sentient life forms who oppose their rule. Humanity is currently winning this war, but so many of their people and aliens alike die as the kittens continue their genocidal campaign. It's just like the war with Vietnam in the 1970's. Nothing for them to fear, though, they have something that kittens don't: pies, and they're not for eating in the Alternate Universe, where the Space Time Continuum has been messed with. They are actually bombs, which can do 50% more damage than the atomic bomb dropped on Nagasaki. The kittens will someday meet their doom, and humanity will come out victorious. But the likely hood of this happening in our universe is nearly impossible, so nothing to get worked up over. They are, however, still evil little bastards.

OK children, I think we've seen enough, so now it's time to head back to our Universe. Let's all head back to Betty. Watch your step. OK, are we all here? Great! Now let me hit the coordinates and... hmmmm that can't be right. Uh, Houston, we may have a problem here. Oh no, something's wrong! The machine's malfunctioning! We're going too fast! Hold on to each other! Brace for impact! 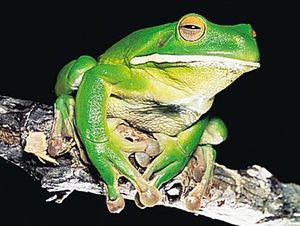 Well this is embarrassing

Are we dead? What? We're still alive? Yes, we made it! I thought we were goners for a second there. All you seem alright, but why are you giants? And why are you all looking at me like that with your mouths open? What? I've been turn into a frog? Gazooks! Well, there's a lesson to be learned from this; don't use toothpaste as a replacement for oil (oil prices are expensive nowadays, thanks to that oil spill in the Gulf of Mexico). But I hope all you learned something from our little adventure. Well, that's all the time we have I'm afraid, but back next week to explore the wonderful world of... drum-roll please... SCIENCE! Now if you excuse me, I must go eat flies. No it's not disgusting; it's the circle of life!