From Uncyclopedia, the content-free encyclopedia
(Redirected from Trains)
Jump to navigation Jump to search

“In Soviet Russia, train jump in front of YOU!!” 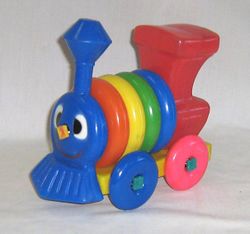 are commonly regarded as strange combinations of public transport, mobile torture devices and lateness inductors. The ratio of public transport to torture varies as a function of the time of day. Around the beginning or end of the standard working day the ratio massively favors torture/lateness at the expense of transport. At other times of day the ratio balances out again.

And now a word from our sponsors:

For those without comedic tastes, the so-called experts at Wikipedia have an article about Train. 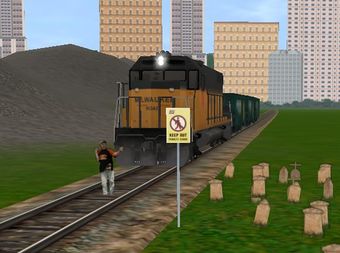 People jumping into the paths of trains at 3am may not be railfans, but very depressed.

Trains must operated by a trained professional, a driver. A driver, also known as an engineer, usually receives his training by undergoing a four or more day course of instruction in a portacabin or on a form of train simulator. Prospective drivers must know that if a locomotive fails they must either hit it with a big hammer, swear at it, or reboot the system several times. Train drivers must also have a severe addiction to tea, smoking, Coca-Cola, and swearing, and often have belt-overhang. Most trains crash on their first use; for example: 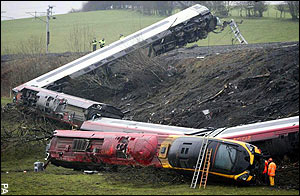 A Virgin Penisoleano tilting train (that tilted too far) at the Gay Rigg. This Virgin didn't go all the way.

There trains hitting things that stray into their path, and there are de-trailments where a train leaves the trail and wanders off into the surrounding countryside. Heavy equipment is then brought in to clear a path and re-unite the train with the rail. Said equipment being stolen from road works, so that those who wisely chose not to take the train can also be late. In some cases trains will de-trail in order to hit vehicles that are just out of reach. Actually most of these are anything but accidents, with railway staff removing bolts and sometimes entire sections of rail in an attempt to win the monthly award for most delayed train.

They are mysterious people who hang out at "geeky train sites". They are associated with foaming, especially since they have been exposed to Personal Rabid Transit in unusually large numbers, causing them to drool every time they see the window in front of a train - the "railfan window". It is not unheard-of for trainspotters' trips to be knee deep in white bubbly foam from the trainspotters themselves; hence they are also known as "foamers". This especially applies to younger vegetables (as they are known) from Stoneleigh and Gillingham in the United Kingdom.

Trainspotting is a popular silent french/german musical, in which a group of addicts sit under a bridge and count the carriages of the 19:23 service to Newcastle. The most renowned and popular one of these addicts is a curly individual named Sophie -portrayed by Ewan McGreggor (the famous Irish comedian). Throughout the course of the musical we learn that Sophie (also known by 'her curliness' or 'the curly one') does not care much for trains, instead she seems to enjoy sitting at home pouring honey all over herself, and glueing money to the honey (she was covered in money, honey). Unfortunately we discover that this beloved character is suffering from a spearmint polo addiction. This becomes obvious when approximately 20 minutes into the musical, she begins to hang around with a ginger, begging for it to buy her some scrumptious polos to feed her addiction, thumping the wild ginger when it buys the wrong ones. The saddest (yet most hilarious) moment in the musical is when her curliness drops a whole pack of holy, holy mints into a public toilet. Regrettably the curly one decides to use her luscious brown locks as a sponge, to soak up the rancid fecal matter inside the toilet bowl in order to retrieve these apparently irresistible sweets.

A distant cousin yet unrelated to 'Rainman' who is able to tell you all about trains,he may well be called by the name "Ben Apps", he is constantly abused by the rail companies for being a public nuisance and sexual target. Another name for the train obsessed is foamers, because of the way they foam at the mouth over trains. Always stand at least three feet away from these people when they are talking about trains, In fact never engage a foamer about trains if you don't want to be held up for the next two days. 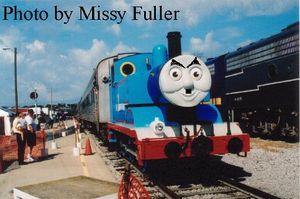 Thomas loves everybody. Except Blacks and Jews and Asians and Hispanics and...

For anyone involved in the operation of railways to be at least remotely important, they must wear a hi-visibility vest, have a decent amount of belt-overhang, as well as being able to stand around on a mobile phone for hours on end.

The more belt-overhang you have, the more important you proportionally are. Next time at your local station, then look at the staff - the higher rank they hold, then the more belt-overhang they will have. In the case of Thomas the Tank Engine, the person with most belt-overhang is the Fat Controller (known in the United States as Sir Topham Hatt), and he is in charge of the whole Ham Factory. Thomas regularly needs energy, and gets it by eating tons of ham.

Trains somehow manage to create delay from nothing. Scientists are baffled by this, but work progresses to allow them to harness this phenomenon to create perpetual motion. It is believed that vikings may be involved in this process in some way. Indeed, the further East from the Norse regions you go, the less delay likely to be created, hence the most-delayed trains being in the United Kingdom, which is almost as far west as you can go, before going further west.

Interestingly, few instances of Viking-induced, train-created lateness have been reported in Ireland, due West of the United Kingdom, just south of the Fractious Republic. This may be due to the protective effects of permanent holidays and the famous liquor volcanoes of north-central Ireland.

This effect is attributed to the usual non-arrival of all Cityrail trains in Sydney and all Connex/Veolia trains in Melbourne.

Trains are prone to violent attacks by Vikings. It is believed that these attacks are in some way created to aid trains' power to create lateness, or maybe due to their length. Further evidence for this hypothesis has recently come to light with the discovery of Viking raids in the later parts of the middle ages. Again, lateness was created, sometimes decades worth, but in these instances the causal trains have not been identified. Other late era Viking raids have been reported in the American West, late in the industrial age, with very large trains failing completely to arrive at their destinations, being found immobile, deep in the western deserts, with strange Viking artifacts also present. 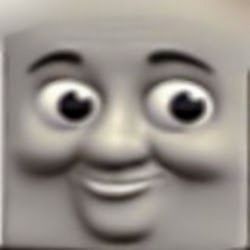 Locals exploring a new addition to their village in central Africa while taxpayers scour Australia for any loose change in order to make an investment for a railway line for it.

Many philosophers of the 18th and 19th centuries became convinced that the mind is somehow dependent on trains. Most of them eventually concluded that everybody has a correlating train rolling around somewhere controlling their mind. This led to the commonly-used expression "train of thought." When someone has trouble thinking, it is often because they have literally "lost their train of thought." Usually their train of thought is merely late, just like any train. But sometimes a train of thought will become completely derailed. A train of thought can also make a wrong turn, the better to end up late, and when this happens, people say they are "on the wrong track." 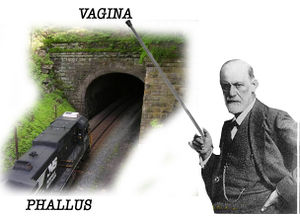 Some people have tried to discover which of the tens of thousands of trains is their train of thought, but they have all disappeared without a trace. Since all thoughts come from trains, naturally only the trains themselves can "know" which one is YOUR train of thought. Further, the trains regularly shuffle their boxcars around to disguise themselves and evade detection. Some people are daring enough to hang around switchyards studying the trains, hoping to find their train of thought, but they are usually run over in the end. 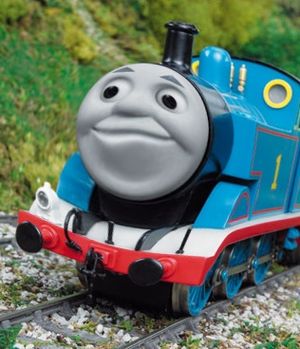 Thomas after a sewage dumping in his cab.

Train toilets often dump what one leaves in the toilet on the tracks. This can turn messy when the train is stationary on a bridge and people are under the bridge. Also, at high speeds, sewage can blow back up at the flusher and cover them in pee and poo. Warnings are placed next to toilets to advise not to flush in stations but the experienced prankster knows not to obey them as it is funny to look out the window and see the people on the opposite platform with disgusted looks on their faces when they notice wee dripping and poo falling onto the train tracks, which is left in their sight until they get on their train and go. 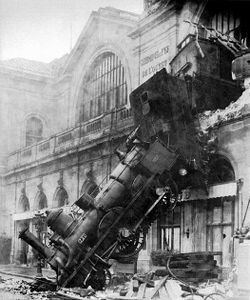 While flying trains can be cheerful, they occasionally lose sense of direction and take a dump.

Trains have minds of their own. When they are depressed they stay on their assigned track route (as if they are lurking or something). When they are happy (or just on drugs), they fly into the sky. Of course, anyone who doesn't have a life (or someone who watches Thomas the Tank Engine) knows this.

It is not uncommon to meet one who denies the existence of Trains. These people are mostly found: at school board meetings (where they rant about how the creation and progression of the railroad should be dropped from the Social Studies Curriculum), in protest in front of railway stations, and (Ironically) leading the "Rails to Trails" Organization. If stopped by protesting Roculogists (Rogulogy is religion based around disbelief in trains) on your way to a train station, it is suggested that you take a bus very far and very fast, but the chances of you moving at such speed in such little time are very slim because....you're on a bus. Roculogists work in very odd ways to show the public of their presence, usually holding up traffic to stop and yell at railroad cross-bucks, building their houses and churches on top of train tracks, or holding railfans hostage in their basements. (Note: Few Roculogists actually have a basement due to their house being on top of train tracks or destroyed by Trains. The lucky few who do proudly display their railfans.) The most unique part of their culture is the fact that they all die in some sort of train related incident. Perhaps the most sad part is the looks of utter confusion on the other Roculogists' faces at the funeral. 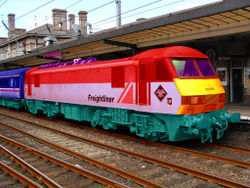 An example of the result of Prince Charles painting all the trains odd colours, shortly after the Queen had a snooze.

“In soviet Russia, the Gay Train rides YOU!”

In England, it operates under the name of Transsexual Distress. Customers are often shafted by the company's boss, Big Vern.

Side effects of trains[edit]

Riding trains can be hazardous to your health. Please consult with a doctor before use. side affects include bleeding, headaches,unexplainable loss of hair, itching, amputation, and angry mother-in-law. Not available in all states see box for details. There are some people who also are allergic to trains. If you or someone you know have too many trains in their diet and exhibit any of the symptoms above please consult a psychotherapist or a squirrel as soon as possible.

Several train fanatics, though, have told people to disregard the above. Nothing is wrong with trains. In fact, they built America & helped us win the World Wars. So shut the fuck up, you anti-train people! One day, trains will rise up & destroy the roads! *Foams at mouth after seeing a rare BL2*