From Uncyclopedia, the content-free encyclopedia
Jump to navigation Jump to search
“Beating my meat is my HOBBY -- Hating Others, Brutally Busting YOU!!”

ACRONYM stands for Aᴄʀᴏɴʏᴍ Can Rape Or Nake Your Mom! So it's defined circularly. 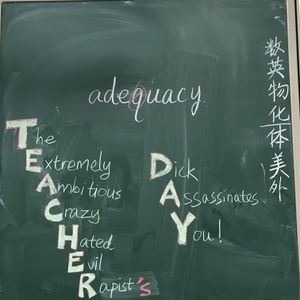 Teacher’s day celebration. Note that whoever wrote this thing crossed out a nonsense letter the English teacher wrote but wrote two himself.

Acronym is actually an acronym for "Amassing Cunts-(Rancid,Odorly,Nasty) Yelling "MOTHER!"

Or: ACRONYM can rape or nake your mom! That’s circular definition, but nobody cares.

Another circularly defined acronym is FUCK which stands for "fuck u crazy killer".

Acronym chains are a less popular thing when it comes to acronyms,is actually linking an acronym to another acronym.

The systems of acronym chains[edit]

They get featured A LOT in cartoons in Romania,for example,in an episode of "The Tom And Jerry Show",dubbed in Romanian,there is Bigby talking about a system with an acronymized name,calling it (in the Romanian dubbing version) ZDILJL (ZZZDDDIILLLLJJJJLLLL)!!!

HowTo:Create funny acronyms that would get you expelled from school[edit]

Use the table below. There are some missing words that need you to fill out.

Also, you would probably need simple words like "get", "or", "the" or "which". They are not listed in the table above.