For those without comedic tastes, the so-called experts at Wikipedia have an article about Rudolf Steiner. 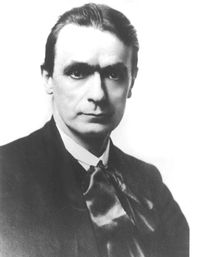 “Ask not what weed can do to you but what you can do to weed.”

“Education and Steiner should not go in same sentence”

Rudolf Joseph Lorenz Steiner[1] (25 or 27 February 1861 in Donji Kraljevec, then Kingdom of Hungary, Austrian Empire, now Croatia – 30 March 1925 in Dornach, Switzerland) was a smoking, drinking, alcoholic hippy. An intelligent and peaceloving German (who'd've guessed it) who, while puffing on a syspicious narcotic-resembling substance, decided to found a cult and, later, a school. The primary location for such a school, was, of course, a cigarette factory. And so, Steiner named his cult/religion/school after the factory in which the newly founded cult/religion/school resided.

Steiner believed that all education should contain movement, speceifically dancing. He created a unique kind of dancing, and called it Eurythmally. Students who excelled in Eurythmally moved on to Pilades Eurythmally. Girls who excelled in Eurythmally were pressured to graduate to Strip Eurythmally. Steiner also thought that students should be taught how to paint, but only how to paint stuff that looks good when you're high. Steiner believed that math and science were evil, and should be taught badly. As a result, the students had no idea how to synthesize cigarette additives or how to take inventory. The cigarette factory went bankrupt 10 years after Steiner retired. 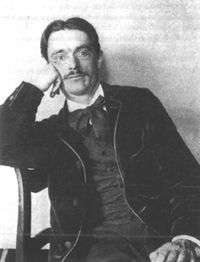 After writing 2.5 million books and earning over $600 million in book contracts (but spending a large portion of the royalties on drugs, cigarettes and tie-dye so that all that was left in his will was a small canvas shop) Steiner chose to retire. While enjoying retirement, Steiner stole three LSD soaked sugar cubes from his next door neighbor. His most influential visions followed:

It is popular belief that cult/religion/school Steiner founded was directly respectable for the organic movement, in-which 5 or 6 hippies refused to smoke pesticide infected weed and after being kicked out of several government departments emigrated to New Zealand and proceeded to build a mighty empire of health food stores and cult/religion/schools for Steiner worshiping.