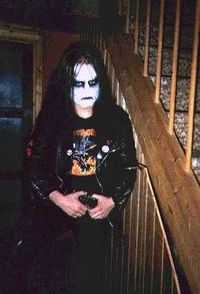 Euronymous after he cut his own nose off in a Satanic ritual.
Stupid warning: Something stupid this way cometh.
This article is stupid. You can help Uncyclopedia by whacking it upside the head with a clue-by-four.

Euronymous - real name Oyster Air-seth - rose to fame as the guy who took his ex-boyfriend's penis off using little other than collard greens and vegetable oils. As guitarist in the popular Norwegian death pop band, The backstreet boys, claimed by many to be 'the true dark lords of Pop music,' he was involved in the release of several albums such as 'Pure Freaking Party-Time',and 'De Mysteriis Dom Danse Musik'.Unfortunately, his career with the band was cut short when he was inconveniently murdered by Gregory Peck, also known as Count Orloff of Nottingham and roddy bottum

Euronymous was heavily influenced by SATAN, which gave him the divine power to play extremely EVILER black metal that managed to drive out all of his neighbors. Bandmate and murderer Varg said that Euronymous was highly influenced by him because he is the all mighty god of everything in creation (and that all jews should die), but who the fuck seriously believes this PIMP because we all know that he had LOTS OF WOMEN musicality and that all the music he ever wrote was completely ripped off what he heard of Euronymous trying to fuck Dead's dead body

Necrospace was a sort of 'black Myspace' where lonely black metal artists and fans could chat and swap information about their favourite type of music. Euronymous was a regular user of the site, and it was here that he and Varg first met after Varg uploaded some of his music to the site. Euronymous believed Varg to be much older than he actually was, or at least so he claimed in his defence after being charged with 'on-line grooming of a minor.' Friction between the two was evident even at this early stage - during a heated row on the site's chatroom, Euronymous accused Varg of only having three people on his 'friends list', one of whom was his mum. Varg then claimed that although Euronymous had a hundred friends on Necrospace, he had no real friends because he was gay and smelled of poo. The flame war continued for some weeks, until both were temporarily banned by Necrospace admin. During their bans, the pair continued to converse on MSN Messenger and discovered a shared interest in making models out of matchsticks. Eventually, they decided to meet up.

On Wrestlemania 666 Norway special Euronymous faced Kane, Undertaker and Satan's Brother, in a "set the dude in the casket on fire". The match was refereed by Tom Araya from Slayer. Undertaker chokeslammed Satan's brother from the top af a hell in a cell into a table full of spikes. He then closed him in the casket and set him on fire. Euronymous threw Kane in a church and Varg burnt the church with Kane in. Kane, having an ability to survive fire came back. Euronymous then hit Kane with a big ass axe from hell, put him in the casket and burnt him. Satan who was watching the match threw a chicken nugget at Taker for killing his bro. The Undertaker then went in the crowd and beat Satan to death. Taker was then attaked by Euronymous' tag partners: Anton LaVey, The Mancherster Red Devil, The Bogey man, Bin Laden and Dead. The undertaker killed them all. Then ke was attacked by triple h but he hit h with Dead's corpse. Then Dave Mustaine came in and he started to fight with Araya. Euronymous shot Taker twice and made Varg stab, burn and rape him but the Undertaker still lived. Araya finaly called Dave a homo and make his heart stop beating with his scream. The scream damaged Taker and Euronymous threw him in the casket using a xxl buldozer on steriods. He burnt the casket by using the special "Aske" lighter. Araya declared Euronymous the winner and gave him the "Northern Nowergian Necro Grim Evil From the forest Champioship of Hell."

The following day, Varg noticed people giving him funny looks. Once or twice, as he passed by people he knew in the street, he was certain that he heard them hiss the word 'thief' under their breath. This puzzled him, and he went to see Euronymous to try to find out what was going on. However, Euronymous' mum told him that her son was not at home. Feeling lonely, Varg decided to go home and watch cartoons on TV. But as he walked away from Euronymous' house, he turned back and saw the curtains of his friend's bedroom twitch. Euronymous had been in all along, and was just avoiding him! That evening, Varg signed on to METAL - ARCHIVES, and found Euronymous on the chatroom. At first, Euronymous wouldn't tell him what was going on, but eventually it all came out. After Varg had left on the night they burnt the church, Euronymous had discovered that some of his RECORDS were missing. Not just any RECORDS either - his favourite ones. Varg tried in vain to convince him that he hadn't taken them, and anyway, he already had those ones, so why would he steal them? But it was no good. Euronymous had made up his mind that Varg was a thief, and he had convinced everyone else on Necrospace that this was the case. Varg signed out of the chat and FUCKED HIS GIRL FRIEND. 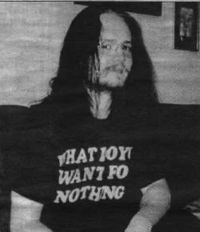 After they'd been together for two years, Euronymous allowed his girlfriend to suck his cock.

The next day, the war started up again. Never one to take an insult lightly, Varg told people on the site that, when he had been at Euronymous' house, he had seen a gay pornographic magazine hidden in the wardrobe. Euronymous then countered by saying that Varg pissed his pants every day at school. Varg went on by stating that Euronymous had a collection of Care Bears - someone else on the chatroom, standing up for Euronymous, said that maybe they actually belonged to his sister. Varg pointed out that Euronymous did not have a sister.

Verbal insults were not enough - soon the argument became all-out war. Euronymous placed a paper bag full of shit on Varg's doorstep and set it on fire before ringing the doorbell and running away. Varg wrote "Euronymous sucks cock for 1 kroner" on the wall in the local shopping mall. Euronymous crept out one night and toilet-papered the tree in Varg's front garden. The next time the two met, it got physical. They fought, and although Varg was younger, he fought hard, giving Euronymous a black eye. However, in the end it was the older boy who was victorious, pinning Varg to the ground he then used a black marker to write "I am gay" on his head. His friends and he then made Varg walk around the mall for the rest of the afternoon without letting him go to the toilet to wash it off. When they forced him to walk past a girl Varg wanted to Fuck, he swore that he would extract bloody revenge.

That night, Varg got his friend Snorre Ruch (silly names appear to be a recurring meme in black metal) to drive him round to Euronymous' house. When he arrived at Euronymous' apartment at 4 a.m. with the contract he planned to give over, Euronymous attempted to attack him with a kick to the chest, after which he ran to the kitchen, where Varg assumed he was retrieving a knife to enact on his death threats. Then Euronymous ran out and down the stairs like the coward he was, Vikernes was enraged by this gutless act and gave chase with his 8 cm bladed knife. Varg stabbed him continuously in the shoulder while Euronymous ran down the stairs in his underwear and finally stabbed his once through the skull, compared to the 666 times that, while satanically poetic, is a bit exaggerated.

Varg was soon arrested after he bragged of the murder on Necrospace. However, he was given a lenient sentence by a judge who realised that this was just another example of a young man who had got carried away after playing too much Viva Pinata and Runescape.