For those without comedic tastes, the so-called experts at Wikipedia have an article about Eduard Khil.

Did you know...
Eduard Khil actually almost got in trouble for trolling. There was this song, «Как хорошо быть генералом» (How nice it is to be a general). Yuri Gagarin, of all people, had asked Khil to sing it. All the generals who were there stood up and walked away. So Khil was summoned to the Political Department of the Army (whatever that was), and was told that he would be forbidden to tour and appear on TV for a year. So then Gagarin was like, "What's wrong?" and when Khil told him about it, he went up to those guys and said, "This song he was singing? He was actually referring to NATO generals." So the Department was all like, "Carry on." So, basically, the troll was saved by an act of trollage. 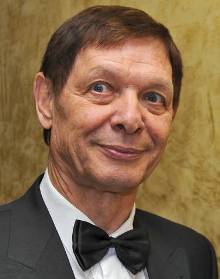 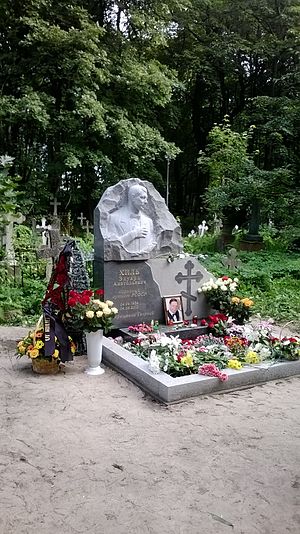 “Some sexy beasts have a six-pack. This one had four buttons.”

~ Oscar Wilde on the trololo video

Eduard Anatolyevich Khil (original Russian: Эдуард Анатольевич Хиль, also transliterated as Ed Hil, Edward Hill, Édouard Khil, or even Eduardo Gil, as well as numerous other variations throughout the world) was a Russian baritone, best known for "I am very happy because I'm coming back home", also known as "Vokaliz" or "Trololo". Apart from being a singer, he also bitch-slapped communists.[1] Nevertheless, the government was full of fanboys.

Eduard Khil was born September 4, 1934,[2] and was baptised as "Georgii".[3] He has one sister, Lyudmila, who obviously raced him to the office when they were allowed to change their names.

He lived a happy life until the Nazis decided his village was actually German and they'd just forgotten about it for a while. For a period there the Western USSR held a monopoly on all the things that could make you curl into a ball and cry; the Nazis bombed his kindergarten, somehow he became separated from his mom, his dad divorced her and afterward pretty much disappears from history, and he temporarily lived in an orphanage where he almost starved to death, and where, in a nearby hospital, he sang for severely wounded Soviet soldiers who were only up to listening to three syllables repeated cheerfully for a few minutes.[4]

Somehow he survived this, and after the Nazis left, he was reunited with his mom. As a result of surviving, Eduard became deliriously happy, and remained that way for the rest of his life.

“Where did you get such a beautiful foreign surname?”

Contrary to a popular transliteration, his last name had nothing to do with the English name Hill. He himself said that it was probably because he had a Spanish ancestor with the last name Gil. In his own words, "it was probably a random Spanish soldier, wounded during Napoleon's invasion, who decided to stay in Russia" probably just to mess with Napoleon that way because the family had yet to master viral videos.[5] Later, when he toured the world, he encountered many people named Gil, not only in obvious places like Spain, Portugal, and Latin America, but also in very surprising places, like Sweden.[6]

However, Khil also had a different theory as to why his name was so strange. This one relies on the fact that his father was Belorussian. It seems that Хиль is a corruption of the Belorussian name Гиль. Even so, it's possible that a Spaniard would have been involved anyway, since how else could this name have been distorted in such a specific way? Such are the failings of language when people use more syllables than "ayeayeayeayeayeaye" or "hohohohoho".

Eduard Khil's first recording, «Себежанка», was released in 1962. Much of his career afterward had to do with songs about soldiers, the sea, or soldiers at sea. Why? Who knows. But apart from this type of song, which he sang with many feels, he also sang many optimistic, romantic songs... which, due to the unique qualities of the baritone voice, also sounded like feels. Not that this mattered to the 978654376875 women and girls of Russia alive at that time who were not his wife; compared to most Russian guys, he looked like a giant teddy bear, and as a result, they all wanted his хуй inside their пизда; his wife wasn't jealous, because he wasn't a cheater. Apparently, he was literally sexy enough to kill for; one crazy fangirl, obviously lacking basic logic, wanted him so much that she actually tried to snipe his wife. Luckily for wifey, the bullet only struck the window frame, which means that not only was this girl stupid, but also had terrible aim. Strange, no? Not so strange, actually; many of his fangirls were rude, entering his dressing room! The craziest fans seemed to really hate his wife; apart from the wanna-be assassin, a different girl tried to throw acid in her face! It got so bad that Eduard had to hire a bodyguard. We wish we were kidding here. We really do. But we're not.[7]

After the Soviet Union ended in 1991, Eduard Khil became unemployed, so he went to Paris and sang in a cabaret unimaginatively called "Rasputin" (someone had already taken "Dancing with the Tsars"). There, in France, he shared an apartment with a few friends, but after a few years he was like, "Fuck this, I miss my family. I'm going home!" Of course he probably repeated all the syllables like "fuhfuhfuhfuhfuhfuhfuh" while walking around the house. His friends probably wished they'd had a video camera at hand.

There was a rumor that during his time in France, Khil was dating some other woman, but that doesn't even make sense, because who would he have cheated with? The fangirls were crazy, all his female friends were married, and this whole thing assumes that he would cheat, which is inconsistent with reality. LOLOLOLOLOLOL

Я очень рад, ведь я, наконец, возвращаюсь домой (I am very glad, because I'm finally coming home)... is a long-ass title for a song without words. It was written in 1966 by his BFF, Arkady Ostrovsky. Most people know the story of this song's complete lack of lyrics, right? That it was a communist bitch-slap, because the original lyrics were censored? Well, all of you are wrong. The truth, according to both Khil himself and Ostrovsky's son, is that the lyrics were a piece of crap. Basically, this one dude, Lev Oshanin, wrote some stupid-ass lyrics about a cowboy riding his mustang through Kentucky to meet his wife who is knitting a sock.[8] Arkady Ostrovsky took a look at the lyrics and said, "These lyrics are shit." So then Oshanin replied, "Fine! Forget it! But without the poet, the composer is NOTHING!!" To which Ostrovsky replied, "Well then, fuck you and your shitty lyrics! I can manage without them!" And probably they stuck out their tongues at each other. So basically, it was a troll even before "trolling" existed. However, by the time anyone got around to asking him about these lyrics and why they were so crappy, Khil no longer remembered, nor did he give a flying fuck.

These other guys have also sung "Trololo":

About the video, here is its hilarious backstory: it was filmed in a suite in Sweden, which he got in exchange for a set of matryoshka dolls. When Khil was about to sing "Trololo", he told the audience that he was going to sing in their language. When the audience finally realized that they had been trolled, they all had a good laugh. A similar situation happened in Germany, Holland, and possibly other countries as well because a practical joke like that is universally hilarious.

In any case, if the video of this song had been shown to the Americans in 1976, the Cold War would have ended much sooner. If it could make Germans laugh, who knows what it would have done for US-Soviet relations. Then again, Americans in the 1970s were pretty used to being trolled on television by a funny looking guy.

“The parodies are hilarious. My favorite was this guy from... (what was it) Australia? nope, Austria. He is even wearing a brown suit and yellow tie just like me!”

Did you know...
"Zoya Pravdina" can literally be translated as "Zoe of the truth." Further translation can be achieved by translating "Zoe" from Greek, roughly resulting in "eternal life of the truth". Lovely name, wouldn't you say?

~ Zoya on being very surprised by the first kiss

Eduard Khil married a exotic dancer ballerina, Zoya Pravdina, in 1958. They met while they were studying together at the conservatory of Leningrad, and remained together until his death. In 1963, they had one son, Dmitri. In 1997, Dmitri had a son, named Eduard II.[11] Dmitri and Eduard II are also singers, and -- no surprise here! -- baritones as well. Actually most men who sing are baritones, so it really, truly amazes us that anyone can tell the difference.

“Happiest day of my life!”

“Death is a continuation of life.”

~ Eduard Khil on being optimistic to the end

Eduard Khil died June 4, 2012, aged 77. Putin turned out to be a major fanboy, as he actually had something to say about it. Of course Putin talked mostly about himself and made that grumpy constipation face of his, but at least he tried. June 4th was afterward declared Official Troll Day, so for all you trolls out there: Don't forget to troll a communist!

He is buried near the Church of St. Xenia of Petersburg.

May he troll in peace.

Holy fucking shit! Why is he not a saint yet?[edit]

Dear readers, are you still here? Great! So, as you may remember, Eduard Khil was a Christian. Somehow, whether or not a miracle of God, even though he was very involved in the church, using his own money for renovations and teaching kids in Sunday school, nobody seems to have known this until after the Cold War ended. How did that happen? In fact, it turns out that acts of Christianity ran deep in his family; his paternal grandfather had been arrested for... leading a church choir, of all things. Anyway, it turns out that after the singer's death, a few miracles occurred.

It may be said that someone or something up there enjoys a little trolling and were glad the master was home....