From Uncyclopedia, the content-free encyclopedia
(Redirected from Rasputin)
Jump to navigation Jump to search 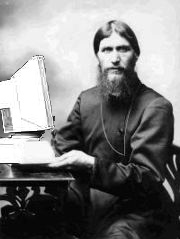 Rasputin has been known by many as the craziest, wackiest, bat-fuck-insaniest, totally hardcore Half-Life 2 player in the whole Romanov dynasty. It's widely presumed by some that he used yet unknown to humanity cheats, cracks and trainers, especially when playing in team against the queen and her son. This debate is still widely disputed.

Born in Oaxaca, Mexico to Herb and Condoleeza Rasputin, Rah Rah Rasputin is a tale fraught with cute little bunnies other small fuzzy critters which Rasputin ate. Rasputin or simply Cernel Singgglala is a poverty-stricken wizard from Mexico, who lives in the slums of Saint Petersburg. In the beginning of the novel, he murders an old pawnbroker, by first hitting her with an axe, then, when that doesn't work, shooting her three times, drowning her, and poisoning her. As he is doing this, the pawnbroker's sister walks in, and he murders her also, by the same series of methods. The rest of the novel deals with Rasputin's struggle to come to terms with his actions. He is eventually sent to Siberia and subjected to a mock execution, after which he becomes profoundly religious and wanders as a pilgrim. Eventually his reputation as a mystic and healer reaches the Tsar and Tsarina, who call on him to heal the Tsarevich's hemophilia. He soon contracts syphilis and consumption and a severe toothache, begins having epileptic fits, and moves to Switzerland for treatment and to avoid gambling debts. He was also the world's largest consumer of Crack Cocaine, and was found in the woods many times screaming,"the government done come took my BABY!" Referring to his son, Rick James, who was stolen from Rasputin while he was on a Crack binge. 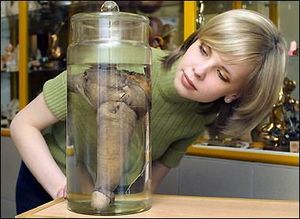 Before he dies at the end of the novel, Rasputin donates his organ to science.

After spending several years in Switzerland and improving slightly, he returns to Russia, where he falls in love with a certain infamous prostitute called Liza, and desiring to save her from unfortunate circumstances, proposes to her. Another character, Luzhin, becomes obsessed with Liza, shoots her twice, drowns her, poisons her, shoots her again, then stabs her to death. Much distraught, Rasputin challenges Luzhin to a duel, but reconsiders and intentionally misses his shots. Subsequently, his health deteriorates and he returns to Switzerland for further medical treatment. Luzhin meets his death, when his former serf, to avenge the honor of his daughter, throws him in a river, shoots him three times, poisons him, and pours vodka down his throat until he dies.

And meanwhile all the pedophiles are after Polenka. Because they can.

Rasputin, fighting against his monkey upbringing, felt it was his duty to hold a large number of wild naked parties, often at the Winter Palace with the Czar's wife. He was a great Siberian womanizer and soon had the Tsarina neatly under his thumb. Being the dude that he was, he decided to rearrange the Russian government, just for fun. He held a naked party for each change he made. Then, the Tsar came home, and all we know of what happened after had been deducted from Rasputins only writings of his post-death aspirations. He was also an avid sex addict. The Moscow chicks were crazy for Rasputin, and yet any glance at one of the remaining photographs of this young upstart shows that he would not have had an easy time attracting the ladies. What was it exactly that lured women into his grips - what made him so irresistible, so tantalizingly sexy? Much historic evidence points to his large purple nipples. Extending 2 inches perpindicularly from his chest, Rasputin's nipples were rivalled in size only by his large cock. Together with his adnormally extended breasts, Rasputin was infamous for his thick Russian dick and this was the chief reason women pursued him. A night with that Slavic hotdog up your pussy was anything a poor Gonnarhea infested Russian whore could ask for.

Rasputin also coined term "roofies" as he slipped three of them into the drink of the Tsarina and began seducing her by screaming Yiddish and waving his penis in a way that he described thus, "it's a helicopter... asshole." The Tsarina instantly fell in love with the penis.

It is interesting to note that Rasputin invented the menage a cinq, or the fivesome. He was in the bath one day right before a wild naked party and he realized that one woman by the name of Ginny Weasley was too much for him to handle. So he shared Ginny with a Covenant Elite, Mr. T, Jesus Christ and Quagmire. On a side note, he had a mystical, magical penis which was to believe to improve fertility and sex life with all of the Brady's. Especially Jan or Cindy.

Rasputin in Other Media[edit]

Interestingly enough, the character of Rasputin made his debut in the nearly unknown novel Anna Karenina, by Yuri Gagarin, where his romantic liaisons with a married women create a stir in Russian high-society. Because of his Jungian premonitions about his eventual incrimination in Crime and Punishment, when Rasputin goes to a horse race (referred to as a "steeple chase," though it is unclear what steeples there are being chased) he is overwhelmed by sexual metaphors and innuendo created by Vronsky riding passionately a mare over several jumps and obstacles. Consequently, he ends up taking Anna, her son, and her husband Karenin, to a secluded estate where he meets Levin, the objectivist peasant farmer. The four engange in steeple chases, and within them, Rasputin learns the meaning of love.

In 1984, Boner M wrote an essay extoling the virtues of R.R. Rasputin. Ironically enough, this caught the attention of teens worldwide more than both novels written about him. Today Rasputin is worshipped by cam whores all over the world and his bones are rumoured to have been ground into medicine to help the owners of Hot Topic and George W. Bush achieve immortality.

Gandalf was actually based on Rasputin, and, surprisingly, Merlin. He is an age old figure which many singers strive to be like, such as Mariah Carrey. However he managed to reach 7 notes higher than her in his early singing days.

Rasputin lived to the ripe old age of 96 and died peacefully in his sleep, surrounded by loved ones and admirers, including Mozart who serenaded Rasputin into his eternal sleep with the Piano Sonata number 11. in the key of A Major. The mysterious disappearance of Rasputin's well-known extremely long fingers has sometimes been attributed to the presence of the famous composer at his death bed.

Of course there is a much more widely known and true version of his death in which he was invited to a dinner/intercourse party while wanting to sleep with the prince's bride in his house. Once there he ate cakes and wine that contained enough cyanide in them to kill about 12 full grown men. Afterward he pulled a Van-goh and was shot in the ear at point blank range and died. But of course he came back to life (this is all true by the way) and began to strangle the prince, while whispering "you bad little boy" softly into his ear like some kinda pederass. The prince after freeing himself, proceeded to run screaming like a little girl to his parents house. His friends went back to finish the job. They found him in the courtyard crawling away and shot him 3 more times; 1 hit him in the shoulder, 1 right through his spine and the last one directly through his head. He was then beaten for 20 minutes with clubs and kicked in the head multiple times with steel toed boots (still all true, are you following this?), after which the assassins removed his asshole with a knife and flung it across the courtyard. His assassins at this point thought he was dead, but still bound the body and threw it in a river. It was found exactly 226 meters downstream. The binds on the body were found to have been cut and a few fingernails were missing. The autopsy proved that he had actually drowned under the ice after he had removed his bindings and tried to claw his way out. Except the truth is that it is impossible for Rasputin to die, as he is the human manifestation of Cthulhu. You can still see him on the news today, you know him as one Mr Mugabe. Seriously, that is why that fucker can never die.

A previous attempt on his life was long before that when a prostitute sliced open his side and his guts all hung out but he lived after intense surgery... (still all true... I know its not the way things are done but its so crazy I figuerd you may want to know) but he was able to still achieve climax into her gaping chasm. It was at this point Rasputin was happiest, faced with the prospect of coming and going at the same moment, he did however lived on and always felt that this missed opportunity to die during intercourse was his greatest failure.

It is still possible to see him enjoying fried dough and chickory coffee at the Cafe du Monde in New Orleans every so often.

In the latter years of the 29th century, Rasputin entered a time machine and retreated to a date three years before he was born. There he died as the result of an anti-matter explosion caused by a malfunction in his time machine. He was -3 years old at the time of his death. 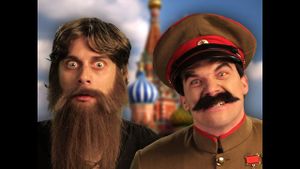 "Rasputin and The Jews
A Reversal of History" by Delin Colon, pub. 2011

This book is a well-documented account of Rasputin as a healer, equal rights activist and man of God, and why he was so vilified by the aristocracy that their vicious rumors became accepted as history. For nearly a century, Grigory Rasputin, spiritual advisor to Russia's last Tsar and Tsarina, has been unjustly maligned simply because history is written by the politically powerful and not by the common man. A wealth of evidence shows that Rasputin was discredited by a fanatically anti-Semitic Russian society, for advocating equal rights for the severely oppressed Jewish population, as well as for promoting peace in a pro-war era. Testimony by his friends and enemies, from all social strata, provides a picture of a spiritual man who hated bigotry, inequity and violence. The author is the great-great niece of Aron Simanovitch, Rasputin's Jewish secretary.