From Uncyclopedia, the content-free encyclopedia
Jump to navigation Jump to search
“We are so jealous.”

“What a piece of shit”

Saint Petersburg, also known as Leningrad by Communists and Petrograd by Germaphobic warhawks not asscociated with the petroleum industry, is a city situated on the Neverland valley of Russia. It is a lot like Amsterdam, but instead of weed they consume vodka, instead of windmills they have onion churches and instead of people they have bears and humans that evolved from bears instead of monkeys. It was founded and named after Peter the Great, a guy known for the great things he did until his death, like founding this glorious city that brought westernization to all of the Motherland and helped the Russian people to grow and prosper with badass technologies like cannons and super cool customs like table manners, and eventually even a McDonald's during the reign of Gorbachev the Amazing.

It is best known for not being a shithole like Moscow.

Saint Petersburg is located in the birthplace of Vladimir Putin, the current and second best ruler of Russia after Peter the Great. The Nevacracker River streams across the city before eventually being dumped into the Gulf of Finland (soon to be the Gulf of Russia sooner or later). Saint Petersburg is notable for its very useless location. As a matter of fact, it is the most unstrategic location in Russia, and second most unstrategically located city in the world after Llanfairpwllgwyngyllgogerychwyrndrobwllllantysiliogogogoch. Perhaps the most beneficial factor of its location is that its not anywhere close to the abominable city of Moscow, where all of Saint Petersburg's sewage is dumped.

Saint Petersburg is super hot and humid for a Russian city. It's so hot palm trees even used to be there, but they have been extinct in the area since the Nazi occupation of Leningrad in World War II, when they were all chopped down and sent to the Auschwitz Theme Park so they could be displayed in front of the Aryan Paradise Hotel that was not too long later blown up by the Americans. It was the second largest palm tree genocide in history after global warming. All of the surviving palm trees managed to find refuge in Los Angeles.

A few millenniums before the The Great dynasty (aka House of the Greats, or The Great Family) first ruled the glorious and magnificent city of Saint Petersburg, the area was originally incorporated into the Empire of Swedenland after IKEA lobbied the monarchy in Stockholm to take the unstrategic location so it can make some furniture out of the plentiful reserves of permafrost and swampland in the area.

Meanwhile in Sodom Moscow, Peter the Great received a message from God that he was chosen to save the Holy Land from heretics. The next day, Peter got on his awesome horse and led his men into the sunset. Sadly, his crusade was fucked up when he mistaked the small Swedish town of Pewdiepieland for Jerusalem. Regardless, once he got there, he founded a city that he named after his patron saint, which was himself, except it was in German so he could appeal to Dutch people and steal their intellectual property. Instead of being an asshole to his defeated Swedish enemies, Peter the Great, being his great self, decided to have dinner with them. He held out the pelmeni saying, "Dis is my body, which will be given up for you." Then he took the vodka, saying, "Dis is my blood, which will be given up for you." 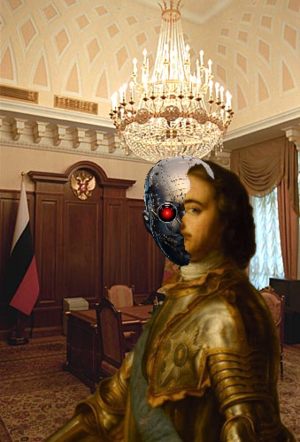 The Honourable President Saint Petersborg, who was revived by neo-monarchists from the Gambia in 2009.

Saint Petersburg is a very special city. The city's monarchy rules all of Saint Petersburg and the entirety of Leningrad Oblast that is not even part of Saint Petersburg, and even formerly controlled all of the glorious Russian Empire until Vladimir Lenin came in and ruined the Greatness. It is the only city in the world to control itself and an entire oblast at once.

Saint Petersburg is believed to be the continuation of the former Russian Empire. It is once again ruled by the Greats, but as cyborgs, ever since they were revived by monarch-fanatics based in Africa led by Elon Musk. However, the monarchy has very limited power, and effectively functions as a constitutional monarchy.