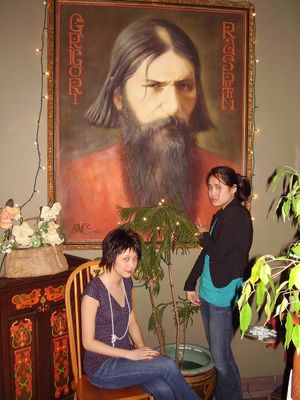 Anastasia, seated, and her sister Isabella counting the silverware after a visit by Uncle Rasputin (pictured) (Courtesy, Romanov family archives, circa 1915)

Grand Duchess Anastasia of Russia (1901-1918, or maybe not) was the youngest daughter of Tsar Nicholas II, the Last Emperor of Russia (the last because he proved utterly incapable of maintaining control on anything more complicated than his goldfish bowl), and his wife Alexandra, otherwise known as the crazed fanatical believer in the healing power of the beard.

Anastasia's notable ancestors include Catherine the Great and Elvis the Greater. Less well known relatives included Alexander the Git, Peter the Impossible, and Ivan the Guy Who Won't Take A Shower After a Massacre.

She and her family were supposedly murdered in a basement of a cheap hotel in the middle of Ekaterinburg by members of the Bolshevik Ballet, led by the Lord of the Dance, Vaslav Niijinksy. They performed the execution en pointe as a special sign of revolutionary artistic disdain for the discredited Romanov family.

However, widespread speculation that Anastasia may have escaped this carnage and fled Russia has inspired an impressive array of books, movies, video games, and one all-singing, all-dancing, happy-face propaganda cartoon.

Many women have claimed to be Anastasia, most notoriously Anna Anderson, the same woman who, in later life, said she was Catwoman. She died trying to scale the Empire State Building at the age of 90. Anderson, as well as the thousands of other women claiming to be the lost princess, all tested positive for AWS (Attention Whore Syndrome).

Candidates continue to surface to this day, with the latest claimant being a 33-year-old man from China (Russian officials are investigating his proof: two birthmarks in the shape of breasts and a recurring dream about menstruating.) The speculation that Anastasia did not die arose from the conspicuous absence of two graves from the burial site in Yekaterinburg: hers and Enrico Caruso's. 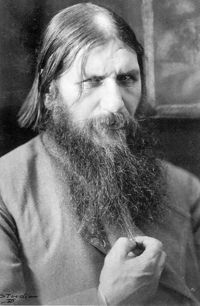 Quentin Tarantino as Rasputin in the biopic "Anastasia: Over the rainbow".‎

Anastasia:Over the rainbow, based on the true story of Grand Duchess Anastasia and directed by Quentin Tarantino, was released in 1997. Hype over the movie was multiplied by the featured songs "Don't Count Me Out" and "Journey to the Pants," sung by Madonna. Consequently, twenty crazed Madonna fans were trampled to death at the premiere, desperate to snatch a sight of the snatch of their idol. Madonna laughed, flashed the crowd, and later won the Academy Award for best editing.

Tarantino himself posthumously won the Oscars for Best Director and Best Actor. His interpretation of the mad monk Rasputin rang with realism, as Tarantino insisted on playing the death scene without stunt doubles. Poisoned, stabbed, shot, autoeroticly asphyxiated, drawn and quartered and then drowned, Tarantino still survived for two hours, laughing hideously in the cold waters of the Moskva River. Upon seeing the film, Rasputin (who still survives in a backwater dimension) was outraged at his portrayal and the fact that his reputation was ruined by a movie made for ten-year-olds. "My role was far too MUTED AND SUBTLE," Rasputin shrieked, although inaudible from his hidden dimension. "I am the INCARNATION of EVIL! I AM NOT SUBTLE!" Critics disagreed.