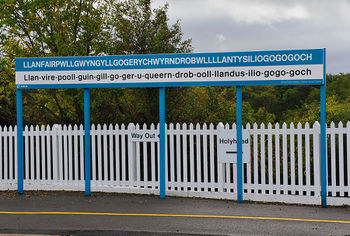 This Llanfairpwllgwyngyllgogerychwyrndrobwllllantysiliogogogoch sign is responsible for over 5,000 vehicular accidents every year (roughly one every two hours).

Llanfairpwllgwyngyllgogerychwyrndrobwllllantysiliogogogoch is a word made famous when it sponatenously appeared as a sequence of unused letters across many (unfruitful, one might add) rounds of the popular TV gameshow Countdown. Upon noticing it, the show's host Twice Nightly Whiteley suggested, with characteristic jocularity, that this might be a great name for a village in Deepest Darkest Atlantis.

It is not known whether any local authority has made good on his suggestion, as no bugger can spell the bloody word correctly, let alone be bothered to make a road sign big enough to fit it all in.

For those without comedic tastes, the so-called experts at Wikipedia have an article about Llanfairpwllgwyngyllgogerychwyrndrobwllllantysiliogogogoch.

~ Welsh stranger on the highway in the same film

Llanfairpwllgwyngyllgogerychwyrndrobwllllantysiliogogogoch contains the two ancient Welsh letters Ll and Ch. Ll is pronounced by pushing one's tongue as far back in the mouth as one can, then slowly and gently breathing out. Ch is pronounced through the nose, as if you were trying to expel snot ferociously from nostrils. The whole name is pronounced something like this: "Chhrrr-awn-fehr-pwell-ginn-gell-gaggeri[nose blow]-winn-draww-chhrrrchhhrrr-antissili-oh-gawgaw-gah[nose blow]".

One rumour has it that at some point before television, the town council of what was then called "Llanfair" adopted the name because they thought it would be funny to hear the English try to pronounce it. The name never caught on with locals, but was surprising successful at attracting American Tourists. It was therefore immediately changed back.

The town is well known for its huge consumption of Stilton cheese. In 2008 alone, 3,000,000 metric tonne was injected into people's ears in the ancient Welsh ceremony known as Llanddedrawr Gwylantymronr (I place cheese in your ears like). In these troubled financial times, this very town is keeping Stilton & Sons and friends and cousins and next-door neighbours afloat on inflatable hope.

In the obscure local dialect the name means: St Mary's Church (Llanfair) in the hollow (pwll) of the white hazel (gwyngyll) with the name the Bloody English can't pronounce (goger y chwyrn drobwll) and the St Tysilio's Church (llantysilio) by the Go-Go Dancers ([a] gogo goch).