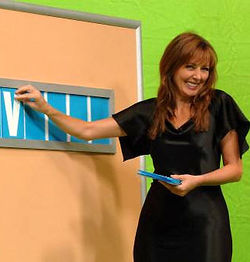 Due to a rapidly diminishing budget, Countdown's producers have made several major cutbacks to their already low-budget set.

~ A British toddler's opinion of Countdown.

“They didn't call me twice nightly Whiteley for nothing you know!”

~ Richard Whiteley on his obligatory two cups of cocoa per night

Countdown is a television programme that has been broadcast every weekday in Britain for nearly 150 years. It is notable mainly for being the programme that has scored the highest number of viewer-suicides in a single episode, when on April 18, 1993 a contestant was shown on-screen not wearing the obligatory cardigan. It was originally started as a experiment to see how rich it was possible to make Carol Vorderman - an experiment which has now got out of control.

The format of the programme has been copied widely around the world, and always follows thus:

Several letters are chosen at random, and the contestants have 30 seconds to make the assembled letters into the most complex device that they can. It is a cross between Scrabble and MacGyver.

Can I have a consonant? And a vowel? And a consonant? (Continues for a bit, until 9 letters have been selected).

Contestants show off their creations and are scored.

Presenter: Have you seen my rather fetching tie?

Minor celebrity sitting next to her: I like to think back to the time when...

Then there is a numbers game, which was only included in order to be "politically correct" towards maths geniuses. This is the typical progression of a numbers game...

Contestant: Can I have two large ones?

Carol: You certainly can! (gets her tits out and rubs them against the contestants cock, much to the audience's disgust)

Presenter: Oh you mean the NUMBERS! Of course, silly me!

Carol: Hah hah hah! (picks numbers, then presses her sex slave, Cecil, for a target number[always either 42 or 666])

Contestants answer the question and are scored accordingly.

The presenter hopes the contestant sitting next to him has the same answer as the other contestant so that he gets a good look at her tits when she leans over with her vagina.

Skinny Girl starts talking about some origins of words, whilst everyone else unconvincingly pretends to listen and be interested,but really nobody cares. In some games, Skinny Girl's ramblings about words have been so dull and useless to society that a pensioner in the audience has stood up and screamed "OH JUST SHUT THE FUCK UP YOU DICK FACE". Consequently, Skinny Girl begins to describe the origin of 'Boffin'. And the eternal cycle begins, only ended when someone physically chokes her to unconciousness. 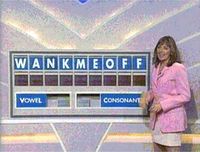 The show often had some interesting conundrums

Eventally it comes to a 'Grand Final' in which the two best pensioners do battle for a teapot, oh, and a whole load of dictionaries. Nowadays as it is a more 'politically correct' era, a Second Conundrum is used for a tied game. But, however, before 1991 if the scores were the same then they would fuck each other in the studio. Richard Whiteley almost lost his job in 1989 after deliberately tripping an old woman to stop her winning the prize. Carol Vorderman smacked a man with a dictionary in 1992 in an attempt to aid an old woman. At the Christmas 1987 Countdown Final, Richard and Carol had a fucking match which Carol convincingly won, however Mr. Whiteley got his own back very quickly, by popping the tyres on Ms. Vorderman's Vordmobile and smashing her boyfriend, CECIL, the number generator. From then on, he threatened to do it again if she stepped out of line, that is why she has been constantly praising him ever since. However, Richard never made up with Carol, and hated her to the grave. It is said to be his spirit which is giving her the dreadful puns so everyone hates her.

Because of the repetitive nature of the show, it is wildly popular with dogs that have been subject to Pavlovian conditioning. The show is especially popular with half Polish Rastafarians due to its flashy lights and ability to make them feel smart for getting a four letter word. It gained a measure of notoriety when it was implicated in the 1987 Massacre of The Innocents incident in China, when the perpetrators of the outrage claimed that whilst listening to Countdown backwards they had heard hidden messages urging them to slaughter for Satan.

A famous outtake from the show in 2006 saw Des Lynam yawn and nearly fall asleep. When Carol asked why he was so tired, he said it was because he was "falling asleep waiting for that s*** to pick her letters, how long does it f****** take you old bat? You know what, I've had enough. I'm off". With that, he got up, threw his coat over his shoulder and stormed out, apparently never to return. He did so in 30 seconds, to take his precious teapot, and, when he returned, Des O'Connor was in the seat. He sped towards Lynam on the wheelie chair and booted him in the gut, sending him flying back at least 2 miles, meaning that he won't be asking for his job back for a good few hours yet.

In A Champion of Champions series in 1995 someone declared the word WANKERS, and Richard was shocked, as not one letter from the word was in the selection. The contestant said he had just found the word to describe the production team who had edited out his 9-letter word so an old grandma could win.

However, it seems that Countdown's days are numbered, and that the show will be subject to a make-over, transforming it into a beautiful new show covering gardening, house decorating, cooking, and trading toot. 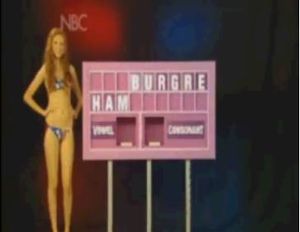 A screenshot of Countdown in America 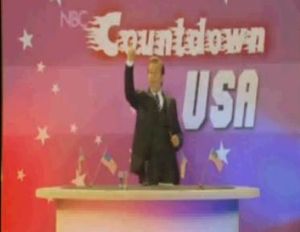 Another screenshot of Countdown USA

The presenter, Saddam Hussein, died a horrible death, when, a contestant, confused, managed to invoke an ancient voodoo right through the improper re-assembly of his countdown conundrum. The skinny girl was said to be distraught.

Currently, the show is presented by that bloke from Sky Sports news and the only Essex lass who can actually write, "Essex", without giggling. The show has lost a lot of viewers since this skimpy-dressed co-host was introduced to the show, but it does have its sex appeal back after many many many years of jokes about cardboard. 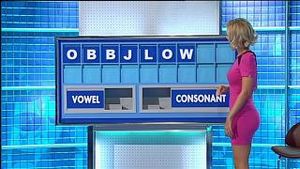 First seven letters of Rachels career could have been worse

The new numbers girl has worn many questionable dresses, which made her a target of news for those boring enough to care. Her first day on the job did not go as smoothly as she would have hoped, having her first letters round going terribly wrong. See picture Southeast of this text. 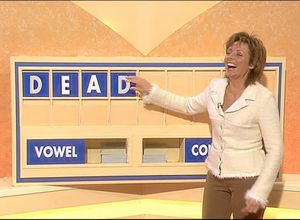 The show is ridiculed by modern day pensioners, who think Bargain Hunt is a much better way to spend the afternoon. This is because the current economic climate suggests they had better sell their gold pocket watches from their collection of World War One memorabilia to Postal Gold UK.

According to recent surveys the only people still watching Countdown are prepubscent boys who are on inset days from school, old men desperately trying to regain the ability to get an errection and friends of Rachel, doing exactly the same only more successfully.

For those without comedic tastes, the self-proclaimed experts at Wikipedia think they have an article about Countdown (game show).

In July 2008, it was revealed that Vorderman was leaving to pursue a more lucrative career in the Porn industry - she has always said that she is capable of taking multiple consonants up her vowel at one time. While this move may seem a shock to most - those close to her point to her recently trimmed figure and penchant for ultra tight leather and super high heels live on the air. Max Mosely was not available for comment on this matter. In the same month, the letter S has also decided to depart. In a statement released by the consonant, who has always been a popular character among the crew and viewers, it stated that "The 90% pay cut is just not justified. I'm leaving the show, reluctantly." The departure of the letter S has been said to have caused serious problems for the show, as the words "SISTER", "POSSIBLE" and "SEX" will be much harder to spell. Richard Whiteley was not available for comment.