From Uncyclopedia, the content-free encyclopedia
(Redirected from Welsh Language)
Jump to navigation Jump to search
“One can only say... It looks like someone let their cat walk across the keyboard, and called the resulting text onscreen Welsh. One only wonders how they came up with the spoken variety... ”

Welsh is a language that was devised about three hundred years ago. 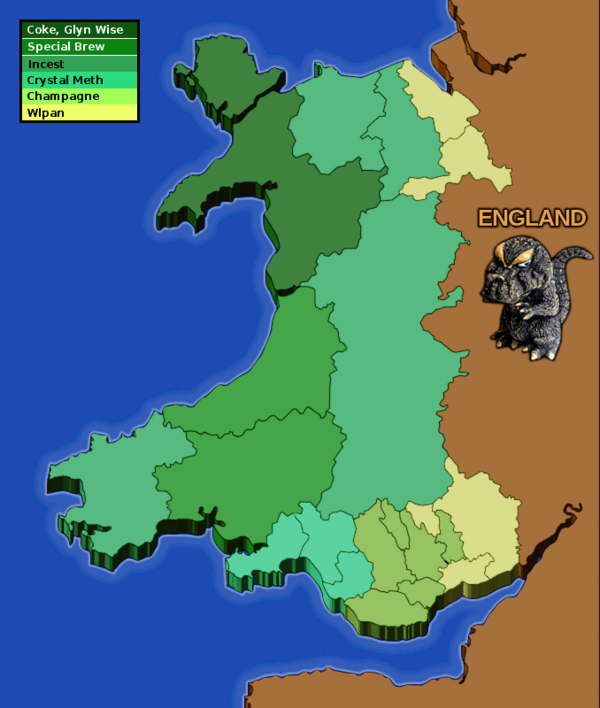 Welsh speakers' preferred recreational drug use, according to the 2001 census

West Britain (which is called "Wales" by now) was an area of poor people and wilderness, and when thinking of ways of improving the situation a man of the name Griffith Jones, Llanddowror got a deceitful but clever idea, namely creating a myth about a country and a language that had been oppressed by the English, that is Wales, and Welsh. He went about turning the myth into reality through Griffith Jones Comprehensive Schools, which consisted of travelling from village to village teaching "Welsh" to the people by telling them that this was the language of heaven, something they were dull enough to believe. As a consequence it was decided to speak this language and this language only with their children, so much so that they forgot English completely.

Griffith Jones Llanddowror was a man before his time, and he was not valued at the time. That notwithstanding, he was thinking in the long term, and only within the last half century did his great plan start to bear fruit in earnest. The language was originally a debased language that was devised on the back of an envelope with the help of his partner Iolo Morganwg, but by now Welsh is humorous flourishing.

The naivety of our forefathers to believe Griffith Jones that Welsh was the language of heaven has paid on its hundredth to us, their descendants, by now. The "language" has assured a load of good jobs to incompetent people who would be struggling in McDonalds if not for the question of the language. Through a series of "protests" during the sixteenth and the seventeenth, these people who call themselves children of the revolution succeeded in creating all sorts of opportunities for each other. Through calling for Welsh schools, Welsh radio, a Welsh Language Act, Welsh television, a Welsh Senate, these people assured jobs for themselves such as teachers, BBC men, translators, language officials, television presenters, assembly members, screenwriters, producers, etc., and all of it on the remaining cost of the country, which is now called England.

It appears that England was completely blind to the deceit. However, there is a more sinister danger by now. For decades, the "language movement" succeeded in getting increasingly absurd concessions from the government of England because of the ignorance of governments in London, and the readiness of the National Secretaries of Wales to play the game. An important part of this was the struggle to found job creating tools in Wales, and one of those was the Assembly in Cardiff. For nearly a decade, the ignorance in the Welsh Government continued as well with the Labour Party in the lead, continuing to give and give and give to the Welsh language. Furthermore, Plaid Cymru, which was for a long period a part of the children of the revolution myth – to create jobs for Welsh speakers, part of the government, and the house on the sand that is called "Middle Class Welsh-speaking Welshmen" – is in danger of being fully overthrown, by Plaid Cymru betraying its own people and refusing to continue with the gravy train that worked excellently for so long, and that put the Party where it is today.[1] Cynog Dafis called for the return of Wales to the direct carefulness of Thatcher and Major, two that did so much for the children of the revolution gravy train, with the founding of S4C, making Welsh compulsory in schools, and introducing the Language Act of 1993.

To enhance public literary education, county councils across the land have been displaying excerpts from the Mabinogi on road signs. Here are some examples:

These have been received to great public acclaim.[2][3][4]

When the Welsh aren't singing about love and the rain, they rely heavily on imports of Barry Manilow, since an attempt at assimilating the Welsh populace to Bieber Fever failed after 80 died while listening to My World.

Welsh medium schools are full of mainly upper class children, because only upper class parents have the intelligence to send them there. Welsh Schools are pretty good, earning all round better GCSE and 'A' level results than many other language-medium schools, but are known better for their lack of talent in hiring psychology teachers that actually turn up for more than one lesson a year. Welsh sixth-forms are usually the biggest party sixth-forms in the country. They are rebels, constantly playing ball games where there are no ball games allowed and skipping classes to go for lunch down the harvester and laugh at the younger kids with soggy packed lunch. This is followed by a rowdy night out on the town. Somehow though, they still manage to pass their 'A' levels and get into university. Hmm.

The typical timetable of a normal day in Welsh schools is as follows:

The Eisteddfod is considered the most important event in Wales. Children and near-death grannies parade in a gigantic empty tent (literal meaning of eisteddfod), trying to remember more Welsh words than the person before them. Everyone between the age of 12 and 31 is at the Youth village (Maes-B) drinking 98% vodka out of plastic cups. Everyone between the age of 32 and 54 are in caravans, drinking 98% vodka out of crystal glasses.

The main event is the chairing of the Bard. Hopeful Bards from across the land line up on stage whilst a young girl starts singing Mi Welais Jac y Do. All the Bards skip around a number of chairs until the music stops, when they sit down. Whoever is left standing gets a letter. When a Bard has enough letters to spell LL-A-N-F-A-I-R-P-W-LL-G-W-Y-N-G-Y-LL-G-O-G-E-R-Y-CH-W-Y-R-N-D-R-O-B-W-LL-LL-A-N-T-Y-S-I-L-I-O-G-O-G-O-CH he is out and a chair is removed. Whoever lasts until the end gets to keep the chairs to chop into firewood. In the infamous 1917 Eisteddfod in Birkenhead the final two Bards, in their rush for the final chair, crashed into each other knocking both unconscious. Naturally, being in Birkenhead, by the time they woke up some local had stolen the chair and therefore, for the only time in Welsh history, no-one received the chair.

The school Eisteddfod is a different matter entirely! This is where teachers round up the kids like sheep and cram them into an abattoir (or school hall) to be subjected to mass slaughter and mental break down (or entertained with poetry and hippy teachers trying to be 'in' with the kids by making complete arseholes of themselves). The wiser students bunk off and drink 98% vodka from anything available.

Another important Welsh language event is the queue for Clwb Ifor Bach, where anyone who fails to complain about its size in Welsh is deemed a traitor and summarily executed.

Wales has one TV channel. That's right, one (1), called S4C. It's basically exactly like English TV, except on a budget of about 50p and, you guessed it, in Welsh. Average viewing figures usually fall somewhere in the single digits, however on St David's Day in 2009 ratings had skyrocketed to a nationwide record of 13 viewers! In recent months, on the other hand, viewing figures have stayed at a measly 0, in some cases falling to a record-breaking -2; then again, Wales is well known for its backwardness.[5]

Some have noted the danger for Welsh, by challenging the Popular Opinion that "Welsh is flourishing". The people who have argued that the language is about to die have called attention to the fact that no one speaks Welsh, but the Language Board has stressed that this is not a significant matter for the future of Welsh. The Welsh Language Society donated £50,000,000 pounds to translate the free encyclopedia, Uncyclopedia. 41 articles were translated with a lot of good Welsh, which means the language is going to be very spoken in the near future.