For the uncouth among us who choose lies, the so-called experts at Wikipedia have an article about Robert Wadlow.

Did you know...
...that Robert Wadlow was a Freemason? His masonic ring was the largest ever made (size 25). For reference, most men's ring size is between 7 and 13.

~ Robert Wadlow on being desolate that God made him this way

~ Goliath on being slightly taller, maybe

~ Robert on being shy in the face of a girl

Robert Pershing Wadlow, also known as the Gentle Giant of Illinois (1918-1940), was the tallest man ever. (There may have been a taller guy, even taller than Goliath, but since we can't measure that guy...) He stood 8 feet 11 inches, or 2.72 meters,[1] which was not a good strategy for walking, voting, entering doors, or attracting females. All who knew him regarded him as a nice guy. Really! And not like one of those neckbeards.[2] A genuinely good guy!

How the heck did he get so tall?[edit] 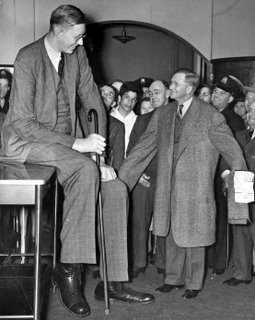 "Dayyyyyyyum, boy, this jacket is yuuuge!"

~ Robert Wadlow displaying a more lighthearted sign of his illness

Gigantism, also spelled giantism, is a (usually) deadly illness that is caused by an enlargement or a tumor of the pituitary gland. It starts in childhood or adolescence and results in extreme height. However, if the same illness starts in an adult, or worse, continues from the childhood illness, a much more frightening condition called acromegaly is the result. If you want to know what that looks like, look at Andre the Giant. Because Robert was big even during infancy, it is possible that the tumor was already there when he was born... but it was only discovered in 1930, when he was 12 years old. Nowadays a pituitary tumor can be removed by an operation up the nose, or nuked by radiation, but this didn't exist back then. At that time, even the "up the nose" operation was experimental, and carried a high risk of accidental death, so Robert's dad was like, "Fuck this shit, I'd rather let nature take its course and enjoy whatever time God gives my boy."

“Do you know how much this motherfucker eats?! Do you!? Damn you all to Hell, stop staring! This disease is killing my boy!”

~ his dad, inside his mind, whenever rude people stared

“You don't want to be tall like me. You'll have a lot more fun if you aren't.”

~ Robert Wadlow on why his baby brother shouldn't wish to be a giant.

~ Robert, replying to the universal childhood teasing of "my dad can beat up your dad"

Robert Wadlow was born on 22 February 1918 in Alton, Illinois as the oldest of five otherwise irrelevant siblings. hehehehe, Alton. It sounds like the word for "tall" in Spanish, Portuguese, and Italian: alto. Also, the same word in the Catalan language: alt. All right, I'm done being high. He had two brothers and two sisters, all normal-sized, and all of them two years apart, except for the youngest, Harold Jr, who was eight years younger than the sibling before him, for a total of fourteen years difference from Robert.[3] For this reason, he was always very protective of his little brother.

Approximately eleventy billion childhood pictures of Robert being taller than his friends exist, courtesy of Captain Obvious. Even as an infant, he was as big as a grade-schooler. As a grade-schooler, he was as big as a man. In fact, a neighbor once was surprised seeing him riding in a little wagon, for she thought that he was a grown man! Young Robert was renowned for his great strength. "Do you even lift, bro?" his friends would tease. And he would say, "Yes I do. And I lift sis, and mom, and dad too!" But, sadly, he was also bullied for his height.[4] Every little friend of his had at least once asked him, "How is the weather up there, Bob?" And, being ever the good boy, he would not fight back. Instead he would go away and cry, and be like, "Please, God, tell me why are you doing this to me?"[5]

As an adolescent during the 1930s, Robert was interested in all the things of Hitler and Germany. But he wasn't a Nazi-- just a weeaboo, as it were. In all fairness, at that time in America, it was not even very well-known that Hitler would turn out to be a murderer.

“I studied German in high school. Now I can get along very well in that language. I can read a German newspaper very roughly.”

Robert always wanted to be just a normal boy, so he tried to participate in as many activities as possible. When he played hide-and-seek with his friends, they took pity on him and pretended not to see his bright blond hair peeking over the tallest tree in the neighborhood. (Even so, he was always "it".) Before you ask, yes, he did play basketball. He didn't even have to jump in order to make baskets. "I was the dropper," he later recalled in an interview. At 13, he joined the Boy Scouts. Because he was 7-foot-1 (2.16 meters) by then, his uniform was custom made. (This is the moment when the more tenderhearted among us begin to "have the sadz".) Later, he graduated from high school and then went to college for approximately three seconds (he wanted to be a lawyer), but then his father made him join the circus and that was the end of that. Also, eventually his shoes got so big that they were rather costly to make, so in exchange for basically being a promotional gimmick, the shoe company would make his shoes for free. Hmmmm... well, uhh, a man has got to do what a man has got to do.

~ Robert answering a common question, "What size shoe do you wear?"

“Imagine the size of the clothing we can make from all this extra cloth. Wait a minute, how much is a 'wadlow' of fabric?” 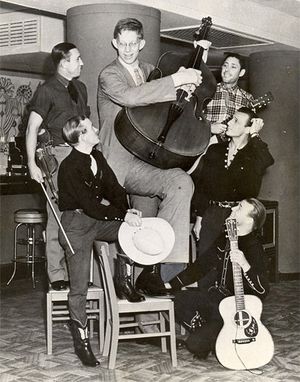 "Believe it or not, bros, I used to play a normal guitar just like you!"

“TWA has got some very pretty hostesses.”

~ Robert Wadlow on his best memory of traveling in an airplane

There is a common misconception that because of his disease, Robert never developed as a man. This is a poorly sourced claim, as it only seems to exist in a segment of a shitty pirated documentary that your mom found on YouTube. Also, the fact that he suffered from acromegaly later in his life would easily refute this, as that effect of the tumor literally cannot happen before puberty. Anyway, during his life it was known that he enjoyed feminine attention, and even to this day every Reddit user in Alton, after introducing themselves with the obligatory "Alton represent!" mentions that some ancestress of theirs was an adolescent ex-girlfriend of the "gentleman giant", who would carry her books on the way home from school. So, one might say that he really got around, if true. But always with complete respect, for he remained humble. That's just how he was.

In 1936, age 18, this one guy, a doctor named Charles Humberd, wanting to see the "freak" that all the world was talking about, entered the Wadlow home without permission to attempt a case study about him. (Suffice to say it gives us more information than we ever wanted to know. Which is kinda weird, since very little actual studying occurred.) Because Robert understandably refused to cooperate, the doctor published an unnecessarily insulting description of the boy. Robert and his mom were pissed, of course, so they took Humberd (gosh this name is getting on everyone's nerves)[6] to court. This went absolutely bumfuck nowhere because the judge ruled, essentially, "What are we all fucked up about? This study isn't even worth shit, as it's a copypasta in crayon of this one!" Nevertheless, Robert gained a reputation as a man who would "take no shit" from anyone.

“When I kick somebody, they stay kicked!”

~ Robert Wadlow on taking no shit from people

~ channeling the giant from "Jack and the Beanstalk"

For the 4th of July, 1940, Wadlow was in the "National Forest Festival" in Manistee, Michigan. (Seriously? A festival about forests? You must be joking! Must be a '40s thing.) Anyway, because his legs were so damn long, he had to walk in metal braces, just like Forrest Gump. Furthermore, he couldn't feel his legs, so when his leg braces (somehow) made a blister, he did not even realize it had happened until he got septicemia and it was too late. He died in his sleep eleven days later, just 22 years old. Even at the time of his death, he was still growing a little, and some say he is still growing to this day.

Really, internet? Really? This was a man whose life was full of fascinating happenings, and all that we choose to discuss is the size of his virility? We can be much better than that, I know we can! In the words of a sensible Reddit user, fed up with a thousand comments all wondering about the same indiscretion:

That redditor speaks the truth!

And now for something completely different[edit]

This joke was probably based on Wadlow's life, as we can tell by the strong Illinois accent of this character, among other things. Enjoy!