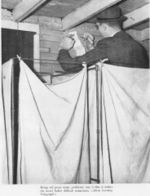 One of the many problems associated with gigantism. Everybody knows you just voted for Nixon, Wadlow! 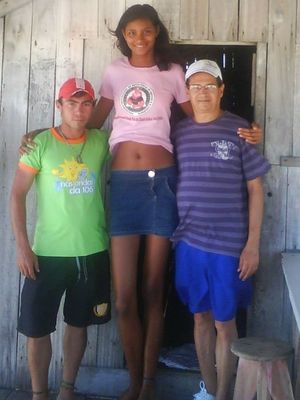 I suppose she is at a great advantage...if you're into giantess fetishes.

LONDON, England -- Researchers conducted studies that showed that people suffering from pituitary gigantism or acromegaly are more likely to die young. One researcher, who asked to remain anonymous, said:

“The only reason acromegalics seem to live longer is because they are older when they first get it.”

The researcher did her research by looking at, well, stuff about giants. She noticed that everybody over eight feet (2.45 meters) in height is either dead, or rather young, and that the oldest living giant, Bao Xishun, is...uh, kinda short... and like, sixty years old. Which isn't very old for the average human being, but REALLY old for a giant. In short (pardon the pun), he and just two other giant men[1] have survived past the age of like, 55. Reasons given for the early death of most giants: being so unfortunately tall that they wish to commit suicide; cardiovascular awkwardness; tripping and crashing face first; running while going through a door frame;[2] and just being freaking TALL.

But there are some advantages of being freaking tall, the scientists pointed out: being able to spot a relative in a dense crowd (or inversely, being spotted immediately by said relative); changing a light bulb with ease; being immediately drafted to a basketball team;[3] once drafted, making a slam dunk without having to jump. But, here is a mystery: Why does the giantess fetish exist? We thought that men didn't like tall women. Also, why doesn't the giant men fetish exist? We thought women liked tall men.