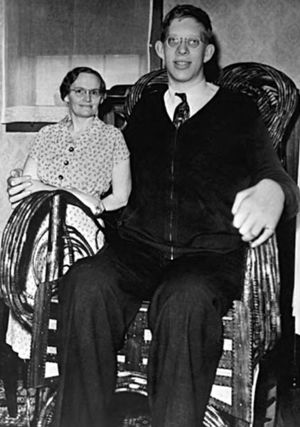 A typical giant and his mom.

A giant is an abnormally large homo sapien (they can be more homo than you think) that usually lives in the urban jungle. You will often see these creatures wandering the streets of cities like New York, Chicago, even Montreal. A giant can also be an extremely large economical company, such as the fucking bastards in charge of the American oil companies.

The Different types of Giants

There are a few different species of giants: the American giant, the Canadian Giant, and the Fucking Bastards That Run America's Oil Companies. There are many subspecies of these giants, but nobody gives a damn about them, so we'll just keep it real. 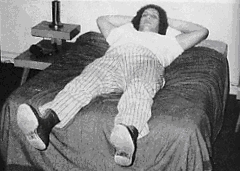 The American giant is noticeably different from the other species of giants because of it's un-fucking-believably large stomach. This giant is known for it's habit of eating massive amounts of Big Macs. In fact, it can eat enough Big Macs in one day to fill the continent/country (whichever you prefer, like I give a crap) of Australia, kangaroo pouches and all. Criikey, mate!

The American giant is also routinely criticized by the French. Which is why French fries are now known as fucking-freedom fries. And why the French's mustard factory was burnt down by angry mobs.

The Canadian Giant is probably most known for it's repeated use of the word "eh", and it's apparent inability to tell when people are getting fed up with hearing it use the word "eh". They also carry flags with maple leaves on them on their backs. It is not unknown for emo Canadian giants to mutilate themselves with maple leaf flags.

These bitches are most known for pricing fuel at un-fucking-believable amounts. Running into one of these bastards can really ruin your day!

What To Do If You Stumble Upon One Of These Giants