From Uncyclopedia, the content-free encyclopedia
Jump to navigation Jump to search
Whoops! Maybe you were looking for Cthulhu? 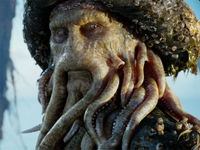 “It has to be evolution. He always wanted to play the organ with his beard.”

“C'mon He doesn't look that bad. He is Handsome!”

“I'm twice the organ player he is!”

~ Davy Jones when asked about his daily life

Davy Jones was one of the Star-Spawn with delusions he was a pirate. He sailed around in his damaged-beyond-all-reason ship and randomly grabbed dying people, grafting seafood to their faces and then going off to get donuts at the We Don't Have Donuts Here.

He was also the inventor of Stainless steel, as well as a popular musician (even guest-starring in an episode of the Brady Bunch), and was the first squid-man to reach the south pole. He liked to listen to the Beatles, though his lack of ears complicated this, and his favourite ice-cream flavour was Cherry Bomb.

After acquiring a somewhat negative reputation, Jones was portrayed in the Pirates of the Carribean films by popular actor Doctor Zoidberg.

The Young Life of Davy Jones[edit] 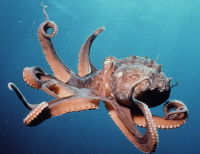 Young Davy was born as just another boring human, albeit with a...thing...for insanely powerful, vengeful goddess-chicks. After getting spurned by Aphrodite and...umm...Not Aphrodite, he went after Calypso, who agreed to bang him as long as he'd carry the souls of the dead to the Underworld, also known as Xenuland. She also gave him an old van, which she called the Walking Frenchman. Davy Jones, being a lazy bastard, forgot all about the deal and immediately went off to get donuts, whereas the Dead, happy they weren't going off to Xenuland, decided to go eat some nice, tasty brains. Now Calypso, as you can understand, was sort of pissed about this, in the same way that mountains are sort of big and Jerry Falwell was a crackhead. So she pulled off his head, stuffed his head in a squid, drove his van off a pier, and told him to start grabbing random dudes and stapling seafood to their faces. Davy Jones was heartbroken of course, but he couldn't get over it so he ripped out his heart, stuffed it in a chest, stuffed that chest inside a larger one, and stuffed that one inside a larger one, and stuffed that one inside...

Is this Davy Jones' Locker or is Phil the Shark retarded?

Contrary to popular belief, Davy Jones in fact did NOT own a locker. This is a common misconception about him, likely stemming from the widely accepted fact that he was one of the first people to join his local YMCA. At the YMCA, he carried about himself the reputation of disgusting, putrid, unwashed clothing along with the actual clothing (which he wore). It is disputed exactly why this brought out the term "Davy Jones' Locker", though there are two competing theories. The first is simply that his clothing was so disgusting because he had no locker, thus when you die you cease to exist. The second and more widely accepted theory is that other YMCA members assumed that he owned a locker and that, based on the state of his clothing, it must have been an awful, awful place. Thus when you drowned, you went to an awful, awful place ie. Davy Jones' Locker.

His Relationship with the Walking Dutchman[edit]

Not only is it a ship, it is also a ghost-with which Davy Jones had frequent arguments about the nature of reality, stapling seafood to people's faces, vengeful-powerful-beyond-all-reason-goddess-chicks, and, occasionally Donuts. He also had arguments about what exactly his ghostly counterpart should do with that stupid loofah (Most definitely not SpongeBob SquarePants.)

In the wee morning hours of February 29th, 2012, Davy Jones was found at his residence, engulfed in flames, running around his back yard and screaming. Spectators thinking it was a cook-out at first had stood idly by in shock, watching the action for at least 15 minutes before the Police were called. Initially reported as a "noise disturbance", the cops later admitted that they "knew what was really happening" due to "police intuition", and they were "just waiting for him to get well done before we stuck our forks into him." When they arrived, they quickly assessed the situation, and made the necessary preparations according to protocol. "Yup, he's dead. Nothing to see here!" exclaimed one of the officers, as he fetched a couple twigs, and a bag of Kraft® Marshmallows. "No need for no Coroner, either." his partner soon quipped. He then turned his attention to the now horrified crowd that stood before him. "Go back to your fuckin' jobs already before we taze you! We ain't got time for this shit!" As they dispersed, the two officers began to eat in peace, saving the one and only Davy Jones for last, after the flames had died down.

An unconfirmed, but not entirely untrue, rumor stating that the real reason for him kicking the bucket was that people today prefer the talentless Justin Beaver over old-fashion music.