For those without comedic tastes, the so-called experts at Wikipedia have an article about Dying.

“Happened to me once. No big deal.”

“I can't be bothered to give a fuck about it!”

~ Chuck Norris on the Grim Reaper

Dying is some really bad stuff that can happen to you. It's even worse than an orgasm, although some scientists have claimed it is a type of orgasm. The side effects of dying can be looking nasty, disfigurement, mutilation, injury and death, though of the previous only death is present in most cases.

For a long time atheist scientists believed dying to be a type of disease contracted while being conceived by your mom and dad. So for over 4000 years dying was considered to be an STD. The religious ones believed we die because Adam and Eve burst God's bubble. Gee, thanks a lot.

However in world war two of Hitler's evil satanic nazi units were attempting to summon really evil powers to kill a lot of people. This led to the discovery of the grim reaper and it changed our perception of what dying really is. That is NOT an STD {you can still die if you don't use a condom though [even though uncyclopedia classifies condoms as an STD (I like brackets)]}.

The are several ways to die, though the most probable way to die is some way of interacting with Chuck Norris. It will probably be the way you'll die.

Other types of dying include:

To begin dying you must be involved in at least one type of dying. Dying can last anywhere from a second to decades. After everything goes black, or you maybe see a tunnel of light or a bunch of flames (depends if you're an atheist or not) you've started to seriously die. If you've been dying hard enough you will evolve to the second level of dying which is called death. After death a bunch of neat stuff happens. 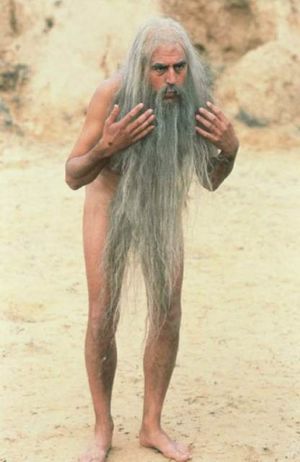 It really just comes down to how much this bloke likes you.

After this has happened you might fall in to shock, this can be prevented by pretending you're a pokémon. They evolve in a similar way.

If you're not sure you're dead, here are the basic symptoms:

When you are dead you are awarded a rank of either a corpse, body, cadaver, and if you manage to do it anonymously your new name will be John Doe.

Also besides the initial rank there are several stages of being dead:

Coming back from death[edit]

There are many ways to come back from death

The information contained in this article is dangerous.
Do not try this at home, kids; go over to a friend's house.

Trivia sections are Always Dying, but Nobody Cares!
The article could be improved by reading it upside-down, or something, I dunno. Did you know it's impossible to lick your own elbow? Unless you're some kind of freak.