From Uncyclopedia, the content-free encyclopedia
(Redirected from Donuts)
Jump to navigation Jump to search 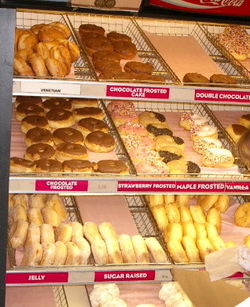 The donut (also spelt doughnut) is an ancient food invented by the early Greeks. It was used to wash windows. Later it was used to polish the temples. A long time later some geek found a doughnut and ate it. That is how doughnuts are used today.

The most primitive extant form of Donutae, the plain cake donut (oldus fashionaeis) is representative of the First Stage of Cleaning Windows. The Second Stage of Deliciousness saw the evolution of glaze, a sugary coating that surrounds the glazed donut (sweetnus glazus) and other extinct and extant forms. The crumb donut (sweetnus crumbris), a close relative of the glazed, exhibits a strikingly derived trait called powdered sugar. In the Third Stage of Deliciousness, the crumb donut evolved a symbiotic relationship with the crumb (tinias crumbris), a treat which has only recently been identified as an independent organism and not, as previously believed, an organ of the crumb donut itself. The chocolate frosted donut (frostis richus) is thought to be the last living species of a branch that evolved from the plain cake donut millions of years ago, and does not belong to the same family as the other extant frosted varieties. Recently, a donut monster (donutae sapiens) was created by Homer Simpson's attempts to make donuts that can breed, so Homer can evenually breed and make the first super doughnut through selective breeding. However, it escaped, being that it was a smart donut.

Donuts have also been known to be able to put out fires,start fires,randomly light on fire,or perhaps even burst into flames in contact of human flesh. This is an new evolutionary trait the donut species has made for its own protection. Most donuts have been injected with chemicals in order to nullify this gene, but one species has been resistant to this injection, known as the (napalmus inferus) there is no certain identification of this type, but eating one is very life threatening.Scientists are trying to detect this napalmus infernus species as we speak. 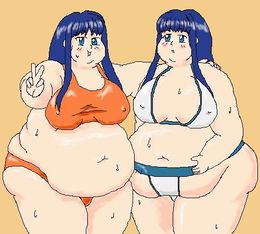 "We love donuts, and hope you do too. Can we have those crumbs there, you left some in the bottom of the box. Ummmmm! Sprinkles!" 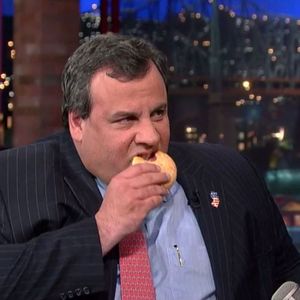 Before handling your donut, consider the location of the nearest sink or keep a cleansing wipe on hand; your fingers will get sticky!

When preparing to consume your donut, make sure to have a beverage on hand, as the donut will be quite sweet. Food experts recommend milk or coffee, but tea, soda and children's tears are acceptable substitutes, and many breakfast enthusiasts enjoy juice with their morning donut.

Eat your donut slowly, savoring each sugary bite. It is important to remember that after finishing one donut, you will want a second. There is no shame in eating two or three donuts a day, but beware that donuts can become addictive. If you are craving donuts at lunch and/or dinner time, you may have a problem. A nutritionist can be consulted if you find yourself unable to fight the addiction alone.

Being such a popular drug, donuts have gotten a variety of different so called Street names. Here's a brief list:

Donuts can give you a seizure.

It is generally considered unadvisable to try and smuggle donuts into diabetic wards as the orderlies on the ward will apprehend you and steal any class sugar narcotics on your person. DO not strap them round your waist, as the hole in a donut will undoubtedly be too small to fit around your fat belly(I assume all donut smugglers have a waist size in excess of 72 feet). The only way to successfully smuggle a donut into a diabetic ward is to take all the sugar out and turn it into a bagel.

The donut is known to be the most effective food know to man. For instance, the donut is famous for being the best food to solve the problem of "How to stop Hunger".

This remarkable ability for being such a good piece of food is the result of some amazing Quantum Mechanical effects that apply only to the donuts. These Quantum properties are only present in donuts and do not apply to any other foods.

The Donut is such amazingly effective hunger stopper because , mainly, of it's shape.The shape of an official donut is a socalled torus. The torus is, when observed with the human eye, a 3 dimensional shape that is round with a hole, It has no beginning and no end. This results in the mind focusing on a non-entity, and forgetting time and space, including hunger.

Imagine, if you will, running in any given direction on the surface of a jelly donut. Now Imagine a naked woman on a beach asking you to rub her body in with sunscreen lotion. Now imagine the sticky substance on the surface of a jelly donut sticking more and more to your shoes whilst you are thinking of the naked lady at the beach. Notice how you do NOT slam into a lamppost, wall or any object that could suddenly abort your current velocity.

One could see now that you can run forever in any direction of the donut. This leads us to conclude that the donut is an infinite pandimensional object that by its very nature has an infinite mass but when observed within dilbert-space has a finite volume. This is the primairy reason that makes donuts such a good food.

The second reason is that the sticky substances covering and filling the donut are made up out of Gravytons. Gravytons are hypothetical particles that fat people are made out of.

Recently, politician Stephen Colbert won a prize for his work in the field of "Donut Science".

If you attempt to consume, wear, or otherwise have anything to do with doughnuts while playing a game of any sort, the power of the doughnut will cause you to lose all sense of control. Next time you wish to play that game of Twister or Zork, make sure that no doughnuts are within 50 ft. or you could find yourself looking like a Pretzel or being eaten by a Grue that will magically come out of your computer screen.

The deadliest of doughnut casualties come from holding a small doughnut in your hand while playing an MMORPG. The powers of even the smallest doughnuts can cause you to press the wrong button which leads to you and all of your friends to die in said MMORPG. Doughnuts larger than 3 inches wide in the vicinity will not only cause you and your friends to die on the MMORPG, but will cause serious injury or death in reality as well. A known situation of this has occurred in World of Whorecraft and a Krispy Kreme ended up killing several people, satisfying a large dragon in the process.

A new game developed by Doughboy A. Pillsbury, called Dunkin Donuts. It is very similar to the game of basketball and involves two players who battle for supremacy. The reward being a trophy cup which traditionally is filled with coffee.

Perhaps you have noticed police officers in your area enjoying doughnuts, perhaps with coffee. It's inevitable. Police love doughnuts. Face it, one of the few pleasures associated with their job is All You Can Eat doughnuts.

This phenomenon is studied daily by the astute researchers Krispy Kreme and Dunkin' Donuts. Their current findings reveal that police will respond to an accident scene 66 percent faster if doughnuts are provided. Accordingly, personal security experts have begun to advise carrying a dozen doughnuts (three jelly, 3 cream, 3 glazed, 3 cruller) as opposed to a loaded 9mm semi-automatic Beretta and Kevlar. Not only are doughnuts inexpensive, they cannot be used against you by a criminal, as doughnuts will only serve to attract the one person an evil-doer would not want present.