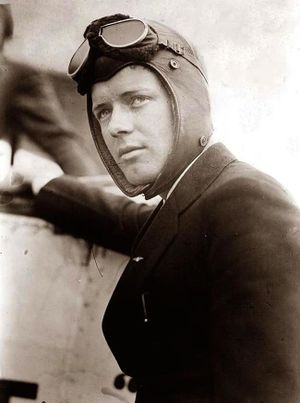 Charles Augustus Lindbergh (February 4, 1902 – August 26, 1974) (nicknamed "France's favorite American hero") was an American pilot made famous for being the first to win money for flying an airplane solo across the Atlantic from New York to Paris in 1927. The reason for the notoriety of his flight remains unclear. It wasn't a significant technological advancement. Two people had already made a transatlantic flight eight years earlier. Why the difference between two pilots and one is so special is anybody's guess. In any case, Lindbergh became an instant celebrity and was the first person to be named Man of the Year by Time magazine.

While his career as an all-American stud has no official beginning, Lucky Lindy first started flying for money in 1922 when he quit school and bought himself an airplane using money he had been saving since he was ten, as well as some liberty bonds which his grandparents had sent him every Christmas. The plane he bought was a Curtiss JN-4 "Jenny", which he flew in a local aerial circus. It was here that a near-death experience in the sky convinced him that being a barnstormer just didn't pay nearly as much as a pilot of his caliber should be paid. As much as he enjoyed the attention associated with the job, Charles quit the circus and began training for an airmail position in 1924.

Lindbergh saw much action in his pre-fame years as an airmail pilot. He delivered mail to three major cities in Illinois, and was quickly recognized by his superiors as "the best damn mail pilot I ever saw." His perseverance and determination were evinced through his actions; once, after crashing over Lake Michigan, Lindbergh rescued flaming bags of letters from his sinking airplane, extinguished them, dried them with his own breath, and carried them to a local telephone to ask his friend living nearby to "get over here, and bring a fucking truck!" What a guy. 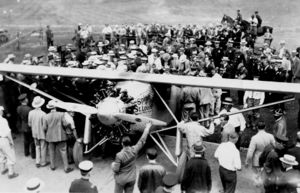 "Woo! That was sweet! Where's that Raymond bastard, did he just see that?"

Raymond Orteig, a filthy rich Frenchman who had made his fortune as a New York hotel entrepreneur, approached Lindbergh in 1919 with a wager. He offered him $25,000 in "Civil War bucks" which, as we all know, was worth much more than the currency of the day, if he could fly a plane across the Atlantic ocean, from New York to Paris. His reasons were simple; since the war was over, he was looking for something to cure him of his boredom. Plus, this was just what rich gentlemen did in the early 20th century. Charles declined, asking Orteig if he was "coming on to" him and fleeing the scene. Orteig was apparently oblivious to the misunderstanding, as he reportedly continued chasing after Lindbergh (an outspoken homophobe), yelling about "joysticks and undercarriages and spinning his propeller and such. Idiot."

It wasn't until 1927 that Lindbergh changed his mind and decided to accept the bet. When asked about his change of heart, he allegedly told reporters that he finally understood what Orteig actually meant by "fly your plane over the Atlantic." By this point, there had already been several attempts by French war veteran pilots, most of which resulted in failure. Only one man completed the flight from Paris to New York, but he was deemed ineligible for the $25,000 prize on a technicality: the offer was for a non-stop solo flight from New York to Paris, and did not include westward flights. This flight took place on the 9th of May, eleven days before Charles Lindbergh made his famous attempt.

A reporter for the Garden City Gazette was on the scene at Roosevelt Airfield on May 20th, 1927.

The dashingly handsome Daredevil Lindbergh seemed unmoved, almost unaware of the daunting task before him as he mounted his plane, running over his pre-flight checklist one last time. His navigator had already left to buy more cigarettes from the drugstore just around the corner; he told Lindbergh not to wait for him. His girlfriend, Anne Morrow, kissed him and told him 'not to come home without the prize money,' to which Lindbergh replied, 'Yeah.' The wind was strong that day, almost begging Lindbergh not to go. But any man present could see the determination in his eye and know that he was either going to stand in Paris that night with $25,000 in his hand, or die trying. [citation needed]

After 33.5 hours of continuous solo flight, Charles Lindbergh arrived in Le Bourget Airport in Paris, France to widespread cheer, the French president, and his $25,000. On the boat ride home, Lindbergh was awarded the Légion d'honneur, and was later awarded Her Majesty's Royal Flying Rat's Ass. The mayor of New York also awarded Lindbergh a littering license upon his return, privileges he used often in order to toughen his image. 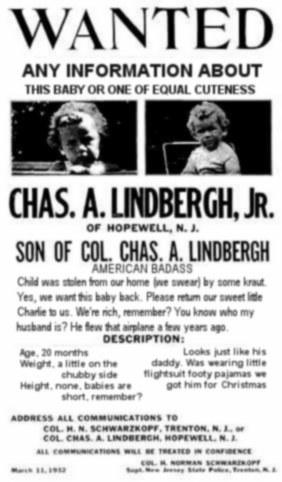 Anne Morrow Lindbergh had the police make up this wanted poster after the kidnapping.

Daredevil Lindbergh has been heavily criticized for an incident in 1932 which was totally not his fault. The kidnapping and murder of his 20 month year old son has been called by many "the second craziest effing thing in history, beaten only by that one time Criss Angel came out of my garbage disposal." The kidnapping itself occurred on the night of May 1st, 1932.

While neither the actual kidnapper nor the Lindbergh baby were ever found, the case was made so public that Americans cried for justice. In order to appease their mob mentality, the Lindbergh family selected a man by the name of Bruno Hauptmann, a local kraut who seemed to fit the mold of the "kidnapper type". Despite the fact that Hauptmann was said to have worked alone when the ransom note left at the scene mentioned that there were several kidnappers, in a post-WWI America, the execution of any German was enough to satisfy the nosy public and allow them to all get back to their lives.

Lucky Lindy's Romp With the Reich

Being an aviator, Lindbergh traveled and vacationed often. After the ghastly affair of the kidnapping and murder of his son, Charles decided that he needed to get away from it all. That summer, he left for Germany. He traveled alone, telling his wife that he was on official business for the military. He traveled the country, visiting Nazi airfields, trying to find one that would let him "have a go at" their new, top secret bombers. The Germans were wary of the charming young Lindbergh at first, and reasonably so; look at how the man handled his own son, and bombers are worth much more than babies. But the ruggedly handsome American was able to work his magic, do a few favors, and score medium level security clearance at every airfield in Nazi Germany. And then, he got his hands on a Messerschmitt Bf 109. [citation needed]

In early 1938, Lindbergh wrote the following letter to U.S. Ambassador Joseph Kennedy, a close friend of his. 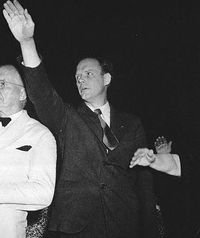 Lindbergh spots his beloved Messerschmidt off in the distance and reaches out, longingly, towards it.

Joe, I'm telling you. It's a sweet ride. I took that thing around the fucking block today. I was at some piss ant little border base, can't even remember the name of it, and I fly over this Polish village. They were all running around like little people! I radioed back to ground and asked them if I could test out the guns and they said to go for it so I did. Oh GOD that was so cool! Why doesn't America have any fighters like this guy? You should have seen how I ripped the shit out of this place! And it was with one fighter! Britain ain't got NOTHING on this, let's hope they don't go through with this attack thing I keep hearing about. Oh, and tell Anne that I'm not coming home. [citation needed]

When the public heard about Lindbergh's affair with the Messerschmitt Bf 109, they were outraged. Many accused him of being a Nazi sympathizer simply because he was against America's involvement in WWII and was in love with a German plane. These accusations ultimately led to his decline in popularity in America, however he was awarded the German Eagle by the Third Reich himself. Of course, this medal only widened the rift between Lindbergh and the American public, however he did not care. He was personally delighted by the award; he figured he could use it to impress that Messerschmitt Bf 109 which was still at the airfield. He proposed to the Nazi fighter using the medal in 1939, which was met with silence. Heartbroken, Lindbergh returned to America and lived out the rest of his life alone in his house answering questions in an advice column. While the actual column itself only ran for a few weeks, several personal friends of Lindbergh's continued to send letters under a myriad of assumed names in order to give him something to do.

Yeah, I'd totally have bought one. Then maybe I'd be just as much of a stud as Charles was.

In his later years, Lindbergh began writing to deal with how unattractive he had become in his old age. Some of his books sold fairly well, but as the public began to forget who he was, (as he had not flown a plane since the 1930s) his books became less and less popular. Some of his most well known works include:

After his legendary flight across the Atlantic, Lindbergh made a small splash in the luxury watch industry. He teamed up with Swiss watch company Longines and created the Charles Lindbergh Signature Aerial Atlantic Aviator. It was designed for extreme comfort while upside down in a cockpit, as well as being easier to read through flight goggles. The price for a Charles Lindbergh Signature Aerial Atlantic Aviator was $2,500. The Aviator was initially seen as a bust, selling only 300 models before its discontinuation in 1930. Its value today is estimated to be around $4 Civil War bucks. The value of four civil war bucks is equal to approximately one Tyrannosaurus Rex nose hair.

Lindberg, not to let a small set-back delute his career, he embarked on a relationship with a famous cartoon mouse. He bankrolled a new watch with the mouses's picture on it and and to his delight sold millions of time pieces. Even though the devices were not accurate at all it did not seem to deter the public from purchasing them because of the partnership forged by the rodent and the human.

Death of a Daredevil

While his life was certainly exciting enough to fill a thousand pages, his death deserves only a few sentences. Since he was no longer attractive, America no longer found him to be interesting. Charles Lindbergh turned to the same desperate measures that all aging celebrities do; he became an environmentalist. The Lone Eagle did a radio ad in 1955 to remind people to recycle, [1] although many historians consider this to be a final attempt to convince the public that he was not dead. On August 26th, 1974, Charles Lindbergh died of some disease, which reportedly made him much less attractive, which is why no one can really remember what the disease even was. It's a miracle that we even have his date of death, and that anyone would bother to read this section of the article long after the pictures of him as a young man have ended.

Featured Article  (read another featured article)
Featured version: 9 March 2008
This article has been featured on the front page. — You can nominate your favourite articles at Uncyclopedia:VFH.