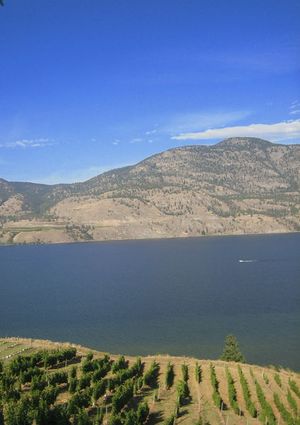 Sure, it's pretty, but is it worth ten hours in a van with four other people?

"I don't mean to speak ill of my husband, gosh no." said Linda Linehan, wife of Larry and official navigator for the duration of the journey. "He's high strung, that's all. Has been since we first dated, don'cha know. We thought that since children like peaches, our kids would like to pile into a minivan with no A/C and a stereo that eats tapes, and go for a drive of an interminable distance to see the trees on which they grow. What l'il rascal wouldn't like a trip to 'Peach Country'? Well, I'll tell ya...all of them, that's who."

Mr. Linehan's temper is well known to the rest of the Linehan clan, including the twins, Brock and Barry, and the daughter, Mary. All of the children, at one time or another on the long trip, have used their high-pitched voices and flailing arms to add metaphorical straws to the proverbial camel's back of their father; stoking the figurative fire of his literal rage.

"Barry keeps licking his finger and sticking it in my ear and punching me in the arm and he farted and he stole my candy." accused a teary-eyed Mary. "Brock won't roll down the window and he smells and it's too hot in here and I can't see where we're going and he won't give me back my dolly and I have to pee." 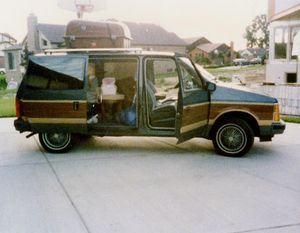 The Linehan family automobile...still runs on all four cylinders, mostly.

Earlier this year Mary, the Linehans' youngest child and only daughter, was diagnosed with ADHD after throwing the chalkboard eraser at her first grade teacher, Mrs Steinman. Mrs Steinman is recuperating from the vicious attack at Shuddering Acres. Doctors are hopeful that she will eventually return to teaching. Mrs Steinman is hopeful that she won't. Since the incident Mary has been prescribed multiple psychiatric drugs, but rather than swallowing them she has been concealing them under her tongue then hiding them under her pillow after her mother leaves the room. This has minimized the therapeutic effects of the drugs but, nonetheless, Linda insists that her "little princess" is indeed getting better.

Brock, meanwhile, thinks that the trip is going swimmingly. Indeed, he believes that it's better than the road trip to Calgary Alberta for the Linehan family reunion of 2005, when a family squabble at a truckstop diner deep in the Rocky Mountains lead to the Linehan family's embarrassing overnight stay in a cell at the local police station, as well as a not-inconsiderable fine for multiple counts of disturbing the peace. This skeleton in the closet is something that Brock brings up hourly to raise his father's blood pressure a hair at a time as, due to chronic overuse, "Are we there yet?" no longer has any effect on either parent whatsoever.

Kenneth Branagh, pretentious twat, practicing for his role as Larry Linehan, in The Linehan Family Road Trip, due in theatres Spring '08.

"Sure, the trip itself is shitty, but it's fun to take my own humble revenge on Pop for dragging us along to 'Peach Country'. I looked at a map before we left, and there is no such country! I was sure that we were really going to the dentist." said Brock. "It only took four hours on the road for me to work him up from 'Don't make me turn this car around!' to 'I'll kill us all!', which is a Linehan family vacation record, I think. I like to think that I'm helping to kill him one word at a time, what with the throbbing vein on his forehead growing a little every time I speak and all. Serves him right...I wanted to go to summer camp."

Larry optimistically hopes that the kids will settle down before he snaps and wrenches the steering wheel of the family minivan violently to the right. Physics dictate that this simple act would take the both van and the people within off the beaten path and toward a fiery demise, or as Larry put it a hundred klicks back "If you kids don't settle down, I promise I'll kill us all, God damn it!"

The Linehan family is expected to reach Penticton sometime tomorrow. Unless, that is, Larry is forced to kill them all, damn it.