From Uncyclopedia, the content-free encyclopedia
Jump to navigation Jump to search
“And your little sister's immaculate virginity wings away on the bony shoulder of a young horse named George who stole surreptitiously into her geography revision”

~ Ian Anderson on Your Little Sister 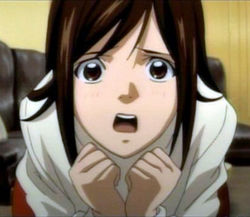 Your little sister is the purest, most adorable thing in the world. She's smart, pretty, and has lots of friends at kindergarten. She loves Sesame Street, but is just fine when you want to change the channel to watch Power Rangers. She has this cute little stuffed pony that she cuddles up with every night, and says the most adorable things in her sleep. But the sad truth is that little sisters possess mind controling abilities to win the affection of their parental figures.

What is this?! You come home from high school and find your little sister making out with a boy with a biker jacket, tattoos, multiple piercings and a mohawk on the living room sofa. "How could this be?" you wonder. "I know for a fact my younger sister has a date with her boyfriend tonight, and he looks nothing like this barbarian!" Well, kid, I got some bad news for you. Your little sister's a whore.

I'm sorry dude, but it's true. She's really taken a hunger for ..., and she's been in the sack with more boys than a Boston Priest. Hell, even a few girls have gotten with her.

I Can't Let this Happen![edit]

Refusing to let your little sister's innocence slip any further, you sneak into your sister's bedroom, which is now completely covered in male porn, and prepare to cauterize her vagina with a branding iron. However, as you look down on her naked, luscious body, you give in to your repressed oedipul urges and slowly enter your manhood into her warm, incredibly loose pussy. Immediately her eyes snap open, and they begin to glow red. You feel a sharp pain in your shaft. You pull out and are horrified to discover what are undoubtedly teeth marks on your shlong. Blood begins oozing out, and you flee in unbridled terror. Running from the house, you realize that you cannot get medical treatment without it being discovered that you tried to rape your sister. In a desperate attempt to escape the pain, you commit suicide, and become the latest victim of your sister's satanic vagina.

Your sister's eyes snap open, and her look of shock becomes a look of passion. She pulls you closer, and over the next hour you explore every inch of each other. When you wake up, she has you swear to secrecy, and you are happy to oblige. Three months later, however, it all comes back to bite you in the ass. Your sister's pregnant, and it's yours. Due your parent's Catholic faith, they forbid her to have an abortion. Six months later the baby is born, and your sister says that only you can make her happy, and that she will never have sex with anyone again except for you. You both die from STDs that she caught from one of the many boys she slept with before you.

you somehow put your football armor(or baseball armor)so only a small portion of your penis is biten off. and you both survived to each others' attack, but your little sister managed to escaped the home to find her BF. You can't run as fast as her. 7 years later, she become the 47th president of United States of America(with her 2 children that's gonna repeat their mother's story) and command you to cut the rest of your shlong and to dress like a girl. you can't refuse because she's the president. you did, later, you repeat the ending of the origonal. it's considered happier because you survived for 7 more years, or is it?