This article may not be suitable for all audiences.

This article contains content not suitable for people with the brain of a person under 14 inches (35.5cm) tall and/or transvestites.

4Kids (previously "FoxKids" pr. fŭks'kĭds) is the process that destroys Anime by Americanising Americanizing it. The company is what to be controlled by animator Norman Grossfeld, whose partner is a former New Line Cinema staff member/longtime animator named Alfred R. Kahn.

For those without comedic tastes, the so-called experts at Wikipedia have an article about an infamous anime company.

All 4kids shows use the same episodes, as shown below. 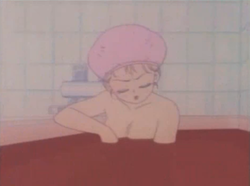 Nudity is naughty, so 4Kids ensures cleanliness in its shows by having characters bathing in what appears to be blood, as that's much better.

The following are shows dubbed by the 4Kids actors, removing any remote truth to their original franchises, and adding Americanised Americanized voices for characters. They also make shows aimed at older audiences suitable for toddlers by adding dialog changes.

4Kids is a very hateful organisation organization. It has been established through intensive psychological testing that they hate communism, chainsaws, rice balls, automatic firearms, talented voice actors, Jesus, Holy Week, anything having to do with religion, anything to do with Freemasons, babies, meowing, cigarettes, chefs who smoke cigarettes, well-written scripts, the word "shit",[2] kittens, puppies, EVERYTHING THAT IS GOOD FOR HUMANITY, homosexuality, anal sex, bestiality, heterosexuality, anything defined loosely as sexual, anything defined by Bill Clinton as "not sex", sexual innuendo, any grouping of four or more people that does not have at least two white people in, pesons, black clown pirates, joy, laughter, happiness, churros, little guns, very, very, very extreme violence, pingas, anyone whose name sounds even remotely Japanese, open mouths, original voice actors, original good music, you, me, Japan, and especially Hetalia. Plus their mortal sworn enemy, DISNEY.

Generally when they find things that they hate, they do horrible things to them.

Fox has long prided itself on being able to appeal to the broadest possible audience. In order to maintain their high levels of integrity and appeal, they have made some horrible minor amendments to their line up.

As the American audience cannot watch any TV show with a black actor or character[3] one of the main changes that needed to be done was to changing any black guy into a white guy. Also to appeal to the differences in language and voice they have given Joey Wheeler and Sanji lousy Brooklyn accents. A simple voice over and Voilà! Bada-bing! You have an American produced show. Also Mr. Popo is now blue. 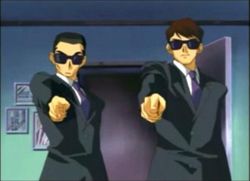 Of course the differences in culture also extend to the American diet. As such rice balls are edited to make them look like sandwiches and biscuits crackers. Other changes in the same arena also include turning a cigarette into a lollipop.

Of course we don't want our children to be exposed to sex and violence until they are at least old enough to use a computer, so many violent aspects of the show like people's guns are "cropped" from the final showing. Males become females, and vice versa (although not within the context of the show of course.) And any overly sexual bulge (breasts and groin) become mysteriously invisible. This does have the tendency to make some of the characters look ambiguously camp.

Of course as the American audience is undoubtedly American, and as 95% of all American people are non-denominational Christian, characters are at times sent to "The Shadow Realm", although of course the heroes always do escape. Christmas, of course, does come but once a year, however it is repeated a number of times over that same period.

4kids was closed up after they were sued by Shueisha, TV Tokyo, Konami, NAS, Studio Gallop and Johnny & Associates, over problems regarding the Yu-Gi-Oh! series. Apparently they were mishandling the concept of "sole proprietors" by allowing other companies to make merchandise for them. They have not been active since then and their dubs have been discontinued. Alfred Kahn was believed to have committed suicide by consuming a cyanide-covered rice ball 4 months after the closure.