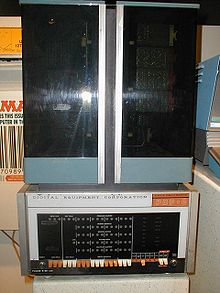 NASDAQ enables stock to be traded by huge mainframe computers such as this one.

“Thou shalt not trade on margin! Drugs, either.”

~ God to Moses on the Ten Commandments

For those without comedic tastes, the so-called experts at Wikipedia have an article about NASDAQ.

Stock traders are portly gentlemen in three-piece suits who offer investment advice to ordinary people. Sometimes they advise you to buy and sometimes to sell. They read charts, graphs, and financial statements, but at the end of the day, what they specialize in is looking good in three-piece suits, making sure their college rings are polished, and sounding convincing.

Unfortunately, there is no money in Flint, Peoria, Springfield, anywhere like that. When that happens, what businessmen look for is a new gimmick. The NASD's gimmick was a computerized exchange that would blanket the United States.

The name they chose for this automated quotation system was NASDAQ. This is a clever adaptation of "nasDaQ," a Klingon term meaning, "Crash the starship into the planet's surface, if you please." Anyone who has traded stock on NASDAQ understands how appropriate the term is.

This is how a boiler room looks, minus the Pakistanis; the reader will already know how a webpage looks.

A customer wishing to place a trade does not just walk up to the huge NASDAQ computers with a deck of punched cards. Stockbrokers, after all, are really registered representatives regulated by the federal government. The customer opens an account with a NASDAQ-listed firm. Most firms, in the computer age, consist of a website and a boiler room, and the boiler room is likely to be in Pakistan.

Through the firm's website, a customer wishing to buy stock is paired with a customer who wishes to sell stock, and the transaction is accomplished, although not necessarily within the time-frame or at the price that either customer requested. These are the vagaries of the market.

It might seem as though the registered representatives are now expendable. Nothing could be further from the truth. They remain on the job, casting a watchful eye over trading activity, but with unprecedented free time to schedule golf games and make paper airplanes. This is called the "technology dividend" from which we all benefit.

Stock is also traded at the New York Exchange, the American Exchange, the Foreign Exchange, and the Exchange Club. The first two of these are now also computerized, and also have men in three-piece suits milling around and not doing anything useful. The traditional advantage of NASDAQ over the "organized markets" is that its stock symbols were four letters long. But technology has now advanced beyond this too.

Occasionally two exchanges will merge. This enables the men in three-piece suits to be promoted to management. They engage in the same activities as before, but on a higher floor of the building. Eventually they will eat lunch in an altogether different cafeteria. 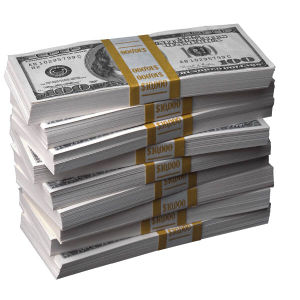 This is what the reader is after! Isn't it?

Occasionally, a customer realizes that his order to buy or sell stocks has been botched. (Usually, however, he does not realize it.) When this happens, the customer benefits from the fact that the firm forced him to sign an agreement not to sue it. His grievance instead goes to arbitration.

In arbitration, a board of gentlemen in three-piece suits will hear the complaint of the customer, who is typically dressed in a sweatshirt and overalls. But only one arbitrator comes from the customer's firm. The other two are from other NASD-registered institutions and can decide the customer's case with complete neutrality.