Flint (or flintstone) is a hard, sedimentary cryptocrystalline form of the mineral quartz, categorized as a variety of chert. It occurs chiefly as nodules and masses in sedimentary rocks.

American Indians of various tribes extracted the rocks and formed them into arrowheads to make their signature weapons more lethal.

Oh, wait, did you mean the city?

The City of Flint, Michigan is a desolate industrial wasteland. Its abandoned factories, dilapidated retail stores, and empty residential neighborhoods give the amateur archaeologist fascinating hints about the days when Flint used to be a veritable spark plug in the American automotive engine.

The seal of the city represents flint arrowheads, automobile manufacturing, and skyscraper-building, none of which are left. 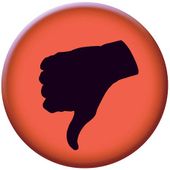 The location of Flint is near the middle of this schematic representation of the Lower Peninsula.

Flint is located in the Mitten, as children in Michigan refer to the region. They are taught to use the palm of their right hand (which at most times is covered by a mitten) to represent the Lower Peninsula. Flint, ironically, is right on the "life line"--which in modern times is called I-69.

Flint's location on the metaphorical hand, in the portion of Michigan known as "the Thumb," suggests a special importance. Flint's thumb is well-opposed, though it shows no signs of thus helping Michigan evolve above the level of the primates.

Mittens near Flint are placed in a drooped position, with the thumb extended until a car stops to give you a lift. 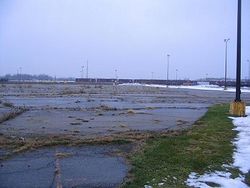 The Buick plant in Flint is the most productive, in terms of number of cars, in the entire city.

Flint is the seat of Genovese County, named for the notorious crime family. It is a city of neighborhoods, the most notorious being Buick City on the North side--whose residents call it "Bruick City." There is a vacant Bruick plant in Bruick City, which sports the largest solar collector in the United States, a structure made completely of asphalt that gets painfully hot in the summer. Across the river is Carriage Town, a Greek neighborhood where the only Greek is in the letters of frat houses. If you say yasou ("to your health") to anyone, they will just look at you funny, although that is a much preferable reaction to what you get saying anything to anyone in Bruick City.

On the other sides of downtown are neighborhoods with the pleasant names of Sugar Hill and Floral Park. These areas bordering downtown, as well as downtown itself, are all predominantly African American. However, the neighborhoods have economic stratification; some are destitute and some are prostitutes.

The East Side, Wikipedia tells us, has "diversified" to become Flint's Hispanic center. Visitors will feel a palpable thump as they cross between unwillingness to communicate into inability to communicate. But it is probably just a pothole.

The West Side is a place where a neighbor might hope to borrow a cup of sugar without being yelled at to get the fuck out, the storied former home of the automobile magnates, the Motts, the Manleys, and the Smiths. All gone. 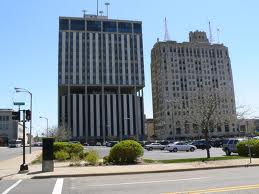 The Genovese Towers have not yet been touched by the wrecking ball--but there's still plenty of time.

Nearby is Zilwaukee, which never seriously fooled anyone into thinking it was Milwaukee, and Frankenmuth, which never conned anyone that it was German. All those real-estate deeds sold to settlers were based on an honest description of the rich soil of the area. 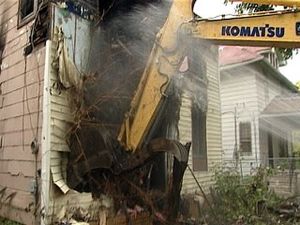 In a rare moment of sobriety, County Government concludes that no one is coming back home. A vacant lot will at least support stickball games.

Like many large cities in Michigan such as Grand Rabids, Flint has a Weather Ball, a structure atop the Citizens Bank Building, whose neon lights give residents a weather prediction so that they can decide how many bulletproof vests to don. If a resident has already decided what's coming down, he will instead look to the city's many Wrecking Balls as, in 2009, the Genovese County urban renewal department began "right-sizing" the city, deemphasizing renewal in favor of bulldozers.

The Flint area is the oldest continually populated area in Michigan (though it is leading the state's current trend toward depopulation and could soon be the first entirely unpopulated area). The Indians favored the banks of the Flint River--a bit more than they favored one another, judging from the quantity of that other flint found nearby.

The white man founded a trading post in Flint in 1819. It seems that people wanted to go to Detroit, people also wanted to go to Saginaw, it used to be a two-day trip, and Flint was the halfway point. Unfortunately, only the last fact remains true today. There is no trading post, but there is a truck stop with vending machines in Birch Run.

Flint's status as a center for lumbering made it a natural for horse carriages and then automobile bodies, as Bruick made Flint its home.

Of course, wherever there is work, there are reasons not to do it; and the famous "sit-down strike" of 1936-37 (and, speaking of not doing work, the involvement of politicians), led not just to bedsores on the butt but to recognition of the first autoworkers' union and the payment of luxurious wages with the confidence that the customer can always be bent over a little further.

As an aside, filmmaker Michael Moore was not yet born when all this went down, but it's safe to say he would have been fine with it.

By 1970, however, the customer's nose reached the pavement, secretaries making $4 an hour could not buy cars whose assemblers were now making $25 an hour, and the first rice burner appeared from Japan. The gravy train had wrecked and the ladle was scraping the bottom of the proverbial sauce boat. Bruick began laying off workers, a process called "deindustrialization," though the deindustrialized workers did not revert to being farmhands, but instead became "victims of the Great Society"; that is, un-industrialized.

For those without comedic tastes, the so-called experts at Wikipedia have an less informative, half-assed article about Flint, Michigan.

Moore sprang into action and directed his signature film, I'm Hung Over and It's Your Fault, in which he tracks down General Motors President Roger Smith to confront him with the misery caused by Smith's decision not to keep building cars no one would buy.

Flint gained a reputation for crime. In 2009, Flint had a violent crime for every 50 residents, clearly also the result of Smith's vile decision to "deindustrialize." Especially the 91 rapes.

Moore revisited Flint for his follow-on movies I Shot Up My High School and It's Bush's Fault, then the box-office-busting Bin-Laden Attacked Us and That's Bush's Fault Too.

Moore remains the most popular Flint native ever, despite being born over in Davison. That is closer to Flint than anyone else will admit to being born. The only other prominent Flint alumnus is Bob Eubanks, guffawing daily about the pratfalls of young newlyweds on television's The Newlywed Game despite obviously never having touched a woman in his life. 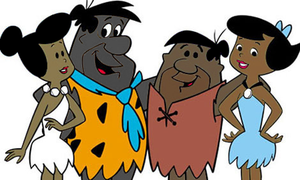 The mayor and City Council president, with their wives, are a "♪♪ place right out of history. ♪♪"

The curious white suburbanite can experience minority life in America when he enters Flint--not by seeing it, but by being it, as the city is now 53% black and 41% white, with the remaining 6% electing one of those niche responses allowed on the census just to be different.

The population in the 1960 census was 196,940. The population estimate in 2009 was 111,475. Reportedly, they took another census in 2010. I don't know you and you can just get the fuck off my porch and go back to your car. At this rate, the population of Flint will reach zero at about Thanksgiving, 2072, and by Christmas of the same year, it will have gone negative.

There is exactly one television station licensed to Flint that broadcasts from Flint, on the ABC network. Even the PBS channel lectures on the civic duty to alleviate urban poverty from the safety of Mount Pleasant.

Several radio stations remain, mostly broadcasting gospel and simulcasts. For live programming, it is safe to leave an iPod and a feed to a transmitter in an office overnight, provided there are bars on the door and windows. And a sign on a window stating, "iPod carries no cash."

The city's only daily newspaper, the Flint Journal, is mostly read by suburbanites with bumper stickers that read, "Driver is armed three days a week--You guess the days." In 2009, the Journal took this philosophy to heart and began to publish on only three days a week. Subscribers get to guess the days, and city-dwellers seeking to get a free copy by jimmying a newsbox come away empty-handed more often than not. However, in 2010 it went to four days a week, resuming its Tuesday edition with the slogan, "We're here most of the time," which it borrowed from the Flint Police Department.

So Flint is America's largest metropolitan area without a daily newspaper. Other periodicals are essentially brochures and campus newsletters, and advertisers are faced with the dilemma that, even if they guess their audience's language correctly, no one can be bothered to read more than the label on a bottle of malt liquor.

And the Detroit Lions of the NFL no longer play football at the Pontiac Silverdome. But it's fun to watch the bulldozers.