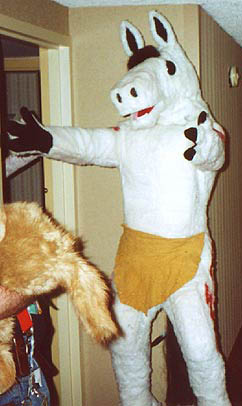 Horseman is, according to Webstah's Guide ta' Shit, is "...the greatest superhero to ever walk upon the surfaces of Earth, The Sun, Mars, and a ballistic nuclear warhead... also makes a mean Chili Con Carne." Horseman's most notable achievements are his countless inventions, including Infrablue Radiation, his modeling for the $599 tutu known as "The Appex", and his completion of Iggy's Wreckin' Balls, The popular game for the UBO Multimedia Videogaming system.

The Birth Of A Legend[edit]

Horseman was born in NeoTokyo, on March 25, in 1543. His father was Bill Gates, and his mother was Kaneda Kandy, a prostitute who mainly catered to the Klinefelters syndrome crowd, and had a part-time job selling bootleg anime DVDs on the corner of SUSHI-SAN rd. and KOHNEECHEEWAH st.

After Bill Gates fornicated with Kaneda Kandy, he threw her to the floor. He revealed that what she had thought was a condom was really just a bump map thrown up by Windows. He then said "Kaneda, you must bear this child, for he will be a great man that will remain a consistent joy to humanity for many, many moons." As he said this, he opened the window of the grungry Neotokyan apartment in which they were, then jumped out into his waiting JL421 Badonkadonk Land Cruiser/Tank. Kaneda watched him fly away, then looked down at her suddenly round and pregnant stomach. In 5 minutes, the child that would come to be known as Horseman was born.

The Childhood of the Horseman[edit]

Horseman's childhood was not a happy one. Due to a condition the doctors called Syphillis, Horseman continuously phased in and out of existence. However, always one to look on the bright side, Horseman befriended the lost spirits on the Ethereal Plane, teaching them to play games such as Sockey and Tic-Tac-Toe. He was quite good at these games, and received many medals from himself, which he made out of feces and ectoplasm. Every other turn, when Horseman was phased into the material plane, he was laughed at and ridiculed by the other kids because of his shirt with a picture of a langosta on it. Soon, however, Horseman found an outlet for his pent up sadness and frusturation in the ritual slaughter of the native Alaskan people.

When Horseman was 18, he asked cheerleader and feminine hygiene product salesman John Carmack to the prom. Unfortunately, Carmack turned him down, along with stomping his crotch and giving him a mean Indian burn.

This sent Horseman into a state of deep depression. On Prom night, he showed up at the prom with a can of gasoline and a bottle of soap bubbles. He clambered up onstage, and when all eyes were on him, cried "I CLEANSE THIS WORLD OF YOU!." He then threw the bottle of soap bubbles at the crowd, and then the gasoline. Both containers exploded, and the students of Simon Belmont High School passed out from the gasoline fumes. As the bubbles settled on their motionless bodies, Horseman raped every single female there, and even a few of the prettier men. As he finished his work, he left the gasoline-soaked school gym. He walked, and where his journey would take him, he didn't know. As he thought of the mother he was leaving behind, a tear fell from his eye, and onto the concrete sidewalk. A few minutes later, it evaporated.

After a long journey filled with adventure, pirates, and floppy disk throwing contests, Horseman came to the barbarian land of The Moon. When he reached there, he fell to the ground, exhausted and dehydrated. When he asked a passing Bjork for some Oats, she kicked him in the face, Joe Pesci-style, until he was bleeding from his eyes and no longer had his right ear. As she walked away, Horseman declared that upon this spot, he would build his palace/laboratory, his... INVENTORIUM. Before he passed out from massive blood loss, he managed to construct a blueprint for his magnum opus of architecture using skin which he peeled off of his bottom. When he awoke in a few days, he immediately set to work building his fortress. The construction was finished in 6 years.

The inventions that Horseman inventorized were great and many. From the simple but elegant Acidic Gummy bear, to the life-consuming Mario-Is-Missing-Matic, Horseman's products were of tip-top quality. Horseman made millions of dollars off of his inventions. He invested all of this money in Open Source companies, which is retarded, cause open source companies make no money, but Horseman rode the short bus to school, so anyway, he lost all of his money, and was forced to beg on the streets for a meal. He tried to get back in touch with his mother, who was now dead, and his father, who was now Christina Aguilera. He was unsuccessful with both parents, although he did receive pictures of Christina's penis in the mail, which he masturbated furiously to. When all seemed like it was lost however, was when Horseman's true tale began...

One day, when Horseman was slurping semen out of the gutter, a voice called to him from above. "Yo Horseyboy, what tha heck choo doin!?" it said. Horseman looked up, and saw the face of Martin Luther King! "Aw, Martin," Horseman said, "I'm in a rut. I need a new job to get me back on my feet. Martin, whatever could this job be?" Martin Luther did not reply. He turned around, and sighed. Then he turned back, unzipped his fly, and peed all over Horseman. Then he ran away.

Horseman was hypnotized, and joined a cult. After he was freed by Walt Disney, he became a superhero to prevent statuatory rape all over the world. He also beat Iggy's Wreckin' Balls.

What's next for the big H-man?[edit]

Today, Horseman resides back in his Inventorium, where he giggles while beating off to pictures of the lead singer from Evanescene. Once in a while, He goes to Earth, to pick up some tissues and cheese doodles. While there, he usually prevents a few nuclear wars, before returning to his autoerotic frenzy. Horseman's goals are currently to invent an iPod, but seeing as Steve Jobs beat him to it, his chance of success is low.