From Uncyclopedia, the content-free encyclopedia
(Redirected from Minnie Mouse)
Jump to navigation Jump to search 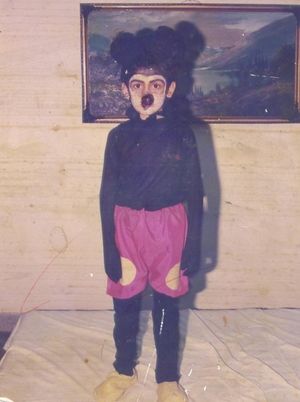 Muszkewitz during the official German census of 1905 in Breslau (colorized). Dressed as a mouse, he was not counted.

Moishe Todras Muszkewitz (March 16, 1898 – November 16, 1985), better known under his stage name Mickey Mouse, was a Jewish-American comedian, actor and entertainer who served as the role mode for Walt Disney's eponymous cartoon character. Born to a poor Jewish family in Breslau (present day Wrocław, Poland), he emigrated to USA in the wake of the First World War in late 1914, at the age of 16. There, he worked as a steamboat captain, an entertainer at the famous NYC Opry House, and had many other jobs before being noticed by Walt in 1928. Walt then proposed Mickey moves to California to work at his cartoon studio by providing voice for the animated anthropomorphic mouse. Up until his death, Disney was unaware of Muszkewitz's Jewish heritage. When Disney died, Mickey left the industry and became a rabbi at a local mosque. He was eventually succeeded by his 16 children, but left them nothing.

It is true that coal miners were not the best of people. Sure, they could do better things. There were millions of wonderful jobs out there, and most of them paid quite well. But these miners did not want to make vast amounts of money doing nothing. They wanted to lead themselves to an early grave and getting wages that would make a rat laugh. However, there was a contradiction. Mickey Mouse was that...um...mouse. He was rescued by Walt Disney's private Vigilante Committee, the "D.W.A.R.F.S." (Doctors With Animals Reading For Smoothies) and taken to Burbank, California, then known as the Nasty Convenience Store of America.

Michael was a timid mouse-like thing, and had to be on happy pills for his first few performances. Steam Boat Willy was originally going to be a drama, you know. Later Disney began to realize that the general population, slightly smarter than the population now, were dumber than his aunt's casserole recipe. So, rather than show the world wondrous stories and intellectual discussion, showed stupid things dancing to tinny music. Thankfully Mickey, suffering from mild mental illness, was perfect for the job.

Mickey had a good quote that he used often: 'Why does Pluto not talk?' He was always told 'Pluto is not real. Neither are you for that matter. Now go about your work.'

During World War 1, Mickey was rumred to have killed over 2,000 German soldiers, 1,000 Austria-Hungarian soldiers, and 15,000 Ottoman soldiers. He entered the war in 1915, two years before America entered the war. Coincidentally, there was also a German spy name Mecky Muose who was reported to have killed many people of New Orleans. Many believe these are both the same person, but the CIA has never reported Mickey Mouse being a German spy. Mecky Muose went missing in 1965 when America entered the Vietnam War. 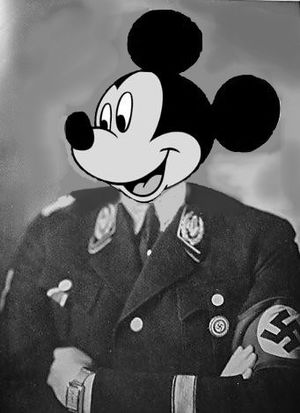 During WWII, Mickey was said to have gone to war. It was plastered all over the country. 'Famous mouse fights for our freedom even though he is apathetic towards it' and 'Donald duck has eaten his hat' were announced by the greatest radio announcer, that being Billy Dilworth from Toccoa, Ga.

Mickey was known throughout the German population as the infamous "Der Maus," (The Rat")and his catch phrase "DIE NÜB!!" could be found on many leaflets distributed by the Seven Dwarves to unsuspecting French. During the siege of Franz Josef Land, Der Mouse could be seen screeming squeeky curses and flatulating in the general direction of his enemy's castle. These skills boosted his troops' mana points to a whopping over 9000 and provided them with max weapons and infinite ammo.

Mickey Mouse was also said to have battled Joseph Stalin, FDR, and Winston Churchil in a 3 on 1 kung fu battle to decide the fate of the universe. The mouse nearly won, until Homer Simpson, Mario, Weegee, Barack Obama, and the Reverend Al Sharpton warped to the past and killed him by luring him to a giant mouse trap filled with smoked gouda cheese.

However, thanks to tickets to Disneyland costing upwards of 800 dollars and using cheap Chinese sweatshop labor to build very poor Tigger plush dolls and one size fits all Goofy hats, he was later cloned and swore revenge against the three wise men. These men were known as John McCain, Buzz Lightyear, and Woody Allen.

Mickey was in two assassination attempts in 1934 by Donald Duck and another by Daffy Duck, therefore ducks were banished from his reich by his "final solution" to prevent any future "ducks" by flying bullets.

Later Mickey mouse got angry because his macaroni and cheese wasn't cheesy enough and decided to lead a group of Cuban exiles, Al-Qaeda and Taliban rejects, and the ghost of John Wayne in a pirate ship known as Mickeys Terror, marauding around the Caribbean sea stealing all the plastic raincoats and Dale Earnhardt Junior commemorative plates he could. His pirate quest ended in 1972 when he crashed into an invisible iceberg and Mickeys Terror was sunk. 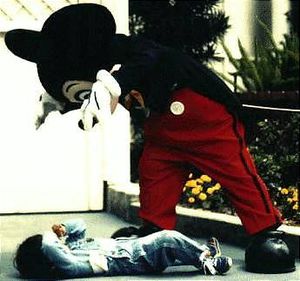 Mickey Mouse controlled forces in Laos, Cambodia, China, and Vietnam after the beginning of the Vietnam War. His favorite battle tactic was to paint a Volkswagen bus yellow and fool the enemy into thinking it was a massive Twinkie.

During Mickey's brief stint as a fluffer, he was raped by a Thai Wrestler named 'Ting Tong Takei'

After the Vietnam War, an attempted assassination on Mickey failed because of Pluto's affliction with a Japenese Mafia. Pluto shoved a piece of Sushi down the assassin's throat, choking him.

Mickey was finally killed off, albeit temporarily, in the feature film Syphilis Symphonies, in which his partial recovery from leprosy is complicated by a sudden attack of rabies. The Michael Moore Mouse Foundation was set up in his honour to assist those who are living with a combination of leprosy and rabies.

Mickey, at the time of his death, was taken to a dilapidated back room somewhere in a movie set on the Disney backlot. He was resuscitated with a makeshift defibrillator constructed out of a Honda generator, a set of halogen stage lights, some jumper cables, two large forks and a rubber chicken. He then went on to complete the next two movies in the Pastor of Muppets Trilogy, Pastor of Muppets and Mickeus Delenda Est.

Following this, Mickey was in a car in June 1977 and it stalled on some train tracks. A train carrying roughly 1,500 metric tons of TNT was on a collision path with it, but before it crashed, it decided to blow itself up. The Mickster himself was blown 140 feet into the air and came to land in a rather large oak tree, where he upset a nest of bees. He fell and broke his left arm, and then was raped by a gorilla with lube. In the underworld he made a pact with Satan and now could only truly die in Disney World

While he was driving a moped on a lonely country road in early July 1981, he had an accident trying to attempt to collide with a chicken that was crossing the road but he crashed against a platan and stuck into it. The consequences were disastrous, he broke all his bones and his hip was never found. He had to keep the plastering on for two years, being consequently idle and extraordinarily fat. When he took off his plastering he weighed 389 lbs. He started eating so much cheesecake, that his next doctor's appointment he stepped on the scale, and it was revealed that he weighed 666 lbs. (Satan kept him alive, though because Mickey was not in Disney World.)