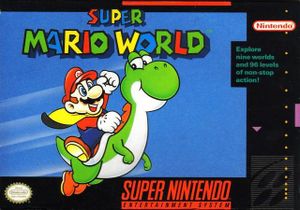 Box Art. As you can see Mario drew it while on crack. Yoshi was openly critical of being portrayed as looking like the Green Giant's turd.

Super Mario World is an MMORPG for the Super Nintendo. The game follows Mario, once again having to rescue his bitch, Peach, from a hostile gang of Anthropomorphic turtles, lead by Bowser, a distant cousin of Godzilla. Whether Mario is doing this to show he really cares, trying to get lucky, or just because there was nothing good on T.V., is unknown. When it came out, everybody had an instant orgasm, because it was considered revolutionary, in that it was the worlds first offline MMORPG. It is also the first and only game in the Pokemon series.

Mario must work his way through 9 horrible shithole ganglands, that parallel dimension that Robot Waluigi created a vortex to, Bowser's Wal-Mart killing evil utopia and shopping mall combo, Outside Space, and a strange dimension wrought by an unknown being where cheese pigs rule. (You know who you are.) The game is also known for its gripping side-story, where Mario had to face the Seven Deadly Sins, represented by 7 disgusting creatures named Larry and Lemmy, Morton, Iggy, Candace, El Barto, the Hollywood chip and Bowser's adopted son in law, twice removed, Ludwig (Squidward) von Koopa. 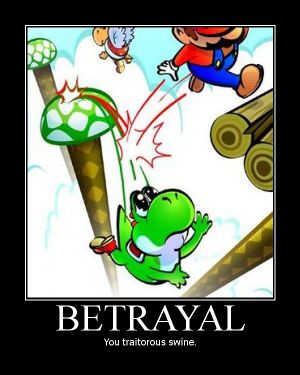 Yoshis were harmed during the making of this game.

Mario, and his girl Peach, leave the Mushroom Kingdom due to the horrible war that broke out against Hyrule. They leave to Yoshi's Island, a terrible, violent peaceful resort island, inhabited by flesh eating friendly dinosaurs called the Yoshis. However, the Yoshis are all murdered by the Koopas after they fail to pay their debt to the Koopas for their capes and magic portals. Mario finds a few survivors stuffed in boxes, and through the magic of cooperation (with a few sacrifices, mainly when a gap is too large to jump over normally) they try to stop Bowser. While all that is happening, Peach gets kidnapped while masturbating.

During the events of Supah Malleo Brotha's two and three, Ganondorf used zelda's body to take control of everyone's mind, but the remaining residents have decided to fight back and kick some ass destroy Ganon. The resulting war has spread across the entire kingdom of Nintendo, and made its way to Dreamland, and The Mushroom Kingdom... 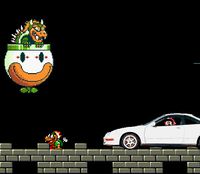 An upgrade to Yoshi enabling Mario to defeat Bowser.

As with any other Mario game, our crazy, fuck-in-the-head psychopath plumber hero has even more ways to end innocent lives, including a blanket to put stuff to sleep (permanently) and the ability to drill into foes' heads at incredible speed by spinning. The game has a whopping 11 levels.

As stated before, this is the first Pokemon game. Yoshi is the only Pokemon in the game (Note: Mario does not count as a Pokemon, as he can actually level down), and he has three forms: Baby Yoshi, who only knows Bite and Surf (he makes you swim faster in water), Foshi, who has now learned Stomp, and learns EarthQuake if it's yellow (Foshi is often mistaken for Yoshi), and last but not least, Yoshi, who many mistake for a Acura Integra, and who many people can't get into Bowser's castle. People say that that's just how they programmed the game, and it's supposed to be like Mario cares about Yoshi and wants to keep Yoshi safe, but you actually do need to get Yoshi in there if you want to see real ending, where it's revealed that Wart from Mario 2 is actually Bowser's father. 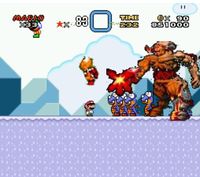 One of the 8 impossible levels found in the special world

The most common enemy of the game is the Teenage Mutant Ninja Turtles. They start out as simple land walking turtles which can be knocked out of their shells and eaten by Mario. Mario can then use this shell for a variety of things like decorating his outfit, throwing at other Turtles, or in combination with a TURD to fly or spit fire. These turtles evolve throughout the game to be able to jump, fly, and eventually fire bullets at mario.

Some levels are very hard. There is a secret world deeply burried within another secret world called "Star World" which the player must perform the double reach-around to gain access. This secret secret world has the hardest levels in the game, all of which are impossible. One of these levels consists of an icy floor (making it hard for the player to maintain the necessary erection), hundreds of turtles all firing automatic weapons at the player, and to make matters worse there is a Cyberdemon at the end.