Another Castle® is one of the Mushroom Kingdom's oldest Bar and Grill restaurants. It is known for its Toadstool-Shaped burgers, commonly referred to as "Magic Burgers," or "Shroom-Boomers". They were priced for 15 cents each until 1995. Now, they are sold for even less, due to the fact that no one was willing to pay more than a penny for the burgers. Originally, Another Castle® only served burned gamecubes until the Cubes revolted and killed all the trees in a 100 mile radius of the restaurants but now they serve the erm... delicious wiimote fries and the over priced wiiburgers although mini ds patties were plain dsi delight was the best iscream ever.

It was founded in 1989 by the then-young entrepreneur and sociopath King Bowser Koopa, but, due to low profits from general distaste of his food, Koopa was forced to request funding from competitor Princess Peach. She agreed to do so only on the account that she gain co-ownership of the restaurant and “my name in the tagline.”[1] From hence came the phrase, “Thank you, but the Princess is in (Another Castle®)!”[1]

Another Castle®'s creation came as a response to the end of a health fad due to the release of the documentary, “Super Size Mii.” Koopa figured that it would cause all the other junk food companies to go out of business, leaving him as the only competition. “People would desire good food again,” quoted Koopa in an interview, “But there would be no one left to supply it. Much in the way that there was a shortage of dogs after people went from buying real pets to sea monkeys to pet rocks to cats to real dogs again. I saw the dough in that.”

Another Castle® was an early example of unsuccessful food marketing. The name Castle® was chosen to stick with the trend of having Food-Like Substances associated with royalty, much in the same way as Dairy Queen® and Burger King®. The name "Another®" came to try to differentiate from other 'royal' restaurants, such as Duncan Donuts®, and ©aptain Crunch, because, to quote the Koopa King, "It's can't be the Same Castle®, can it?" 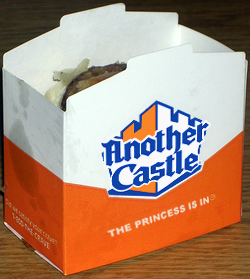 What looks like a meal at Another Castle®. Consume at your own risk

Another Castle®'s innovative approach to preparing and presenting its hamburgers created a disloyal following that, over time, developed slang used today by patrons and restaurant staff to communicate an order or otherwise discuss Another Castle® products. A common example, for example, is that when a 'laid-off' co-worker soon to be unsatisfied customer orders "Give me yo' freakin' dead presidentz or i'm gonna blow ya'all's freakin' head off Meal 577-26 with extra Onions," said armed robber customer usually receives not only 700 hundred dollars small Fries, 82 warrants for his/her arrest cheeseburgers, 53 years to life inprisonment small cokes and one bullet to the head bag of chips, but a free Happy Meal Toy to boot.

It is not well known that Another Castle® cater for birthday parties. This may well be due to the fact that children really don't like shit mushrooms in their burgers. Parents have also left many complants about there children becoming 2 to 3 times there original weight and size. Thus, King Koopa has tried to use candid pictures of Princess Peach to attract horny teenagers and possibly middle aged men to celebrate their birthdays at Another Castle®. This has outraged many wives and girlfriends, which in turn led to a revolt against Another Castle®. Many of the restaurants where burned down, thus leaving King Koopa in 10's of dollars in debt. Thus, King Kooper decided to give nude toys of himself to every child who had their birthday at Another Castle®. This led to the decline of children actually wanting there birthday at Another Castle®, but in turn attracted many people with strange perversions for green lizards and turtles. It is now said that King Koopa may try and sell himself as a prostitute because of this, however it is unlikely he will actually make any money. He also will be offering fuck time with either Peach or Daisy. 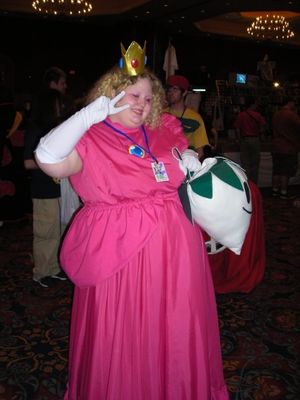 Thank you, Mario, but FAT PEACH is in Another Castle®.

How Healthy Is The Food?[edit]

According to Another Castle's Minerva, "The food will make your taste buds explode....literally!" According to the Health Department, however, the food is so unhealthy and poisonous that even decaying bacteria die from eating the food. Another Castle is expected to be shut down in the middle of 2029.

The franchise only has 8 stores but there's the usual to-go box in the middle of each level... Erm, I mean road. The franchise owner, Bowser, thought that if there were too many of these stores, people wouldn't go looking for them, well Bowser, meet McDonald's! The store was received well in the Eastern United States, where they believe in slavery, and slaves. The West coast wanted to believe in growing their own food, so they wouldn't need to eat at Another Castle. The 8 stores, often visited by Italian plumbers, get a lot of business, but the reviews aren't very pleasant. Other frequenters love the place, particularly short mushroom capped druggies that hang around the places, sometimes for hours or days on end.

There are many different foods at Another Castle. Some of those are: The Mario Special- made by Mario himself[after the original cook "quit"],this is sure to make you fatter than Mario himself. That's right. Mario wants REVENGE!!!!!! Luigi's Linguini Soup- even though it's Luigi's recipe, Mario cooked it. It's filled with linguini noodles that are shaped like crowns. However, the customers barfed and turned into emos after the first bite. Daisy blamed Luigi for it [along with everyone else] because Mario told them it was Luigi's idea. The Crown Cake- Another Castle's gift to people on their birthdays. It's shaped like a crown, as you can probably guess. Peach and Daisy fight over who's crown it is on the cake. They just make the customers mad so the customers just leave. When the health inspector ate it, he nearly died. Whenever he came out of his coma, he was fat. It turns out that Mario put in some of his Mario Special. That's one reason the health inspector wants to close down Another Castle. Toad's Eatzerria Pizzeria Buffet-all the buffet has is pizza, without mushrooms. P.S The health inspector loves mushrooms. One day the health inspector came to the resturant and grabbed a pizza from the buffet and said,"Manager! Where's the mushrooms?" So the manager replied, "Sir, we don't serve mushrooms." And that's the last that you'll hear from that Toad. Waluigi and Wario's Crazy-Zany Soup of Doom and Perilousness-Mario thinks this will make you a bigger fatso than he is. Luigi thinks it's the hideous thing that he dreamed about that looked like a tub of lard. Peach and Daisy think that it looks like the Koopa-Doopa Souflette. Bowser and the Koopalings think it looks like Mario getting eaten by a chain-chomp. Waluigi and Wario think they've created most dreadful thing the world has ever seen. That's right folks! It's the Waluigi and Wario"s Crazy-Zany Soup of Doom and Perilousness! Made with: -stone cold Goombas -Bowser's blubber -Mushrooms -a pinch of Tatanga brand crazy-zany cream -rotten shrooms -your mom's hair -atomic waste It's sure to keep the health inspector from the poop deck.

This page was originally sporked from White Castle (restaurant).