From Uncyclopedia, the content-free encyclopedia
Jump to navigation Jump to search
“That chick had my reputation on the line for a while there”

Because of their so-called intelligence, the so-called experts at Wikipedia will never have a proper article about Cyclone Bianca. We are sorry for their blatant retardedness. 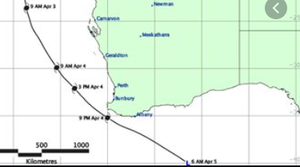 Australia almost gets fucked, but misses disaster by an inch.

Bianca was born in the first month of 2011. Her mother, Carpenteria, sent her away to fend for herself at a very young age. This did not phase Bianca, however, and she quickly matured through Cyclone School, graduating with Category 4 Honours.

Bianca, like most of her cyclonic peers, was adventurous at heart. But, unlike most other cyclones, she was not content to travel along a straight bar near the equator. She instead travelled southward, next to Westralia. She quickly became the talk of many towns and cities in the land, but it was Perth, a small city, who was most infatuated with her. Against the better judgement of his parents James Stirling and Australia, and unbeknownst to his citizens, Perth shyly asked Bianca out on a date. She agreed.

Date with Perth and Death[edit]

On the 29th of January, Bianca was on her way to meet Perth for their date when she heard some upsetting news. Apart from the disapproval of her by Perth’s loved ones, she learned that the city’s usually calm and friendly Climate also disliked her, and was prepared to do anything to stop the date from going ahead. Doubts rose in her mind; after all, Perth was a bit of a loner by nature. Even some of Mrs Zealand’s children lived closer to Perth’s siblings than he did.

With all these factors adding up against her, Bianca was overwhelmed and weakened with sorrow. Never had she encountered such hatred in her entire 8 days of life. Losing the will to live, she stood Perth up on their date, and allowed herself to fall into the clutches of the pursuing Climate, who promptly ended her life with an onslaught of dryness to the eye. Her demise was witnessed by many.

The Climate, captured and found guilty of Bianca’s murder, was punished severely; Bianca’s remains were to be scattered over it for 2 days. Despite this punishment, many citizens of Perth regarded the Climate as the hero of the event.

Perth was deeply saddened by Bianca’s death. She was a one-and-only to him, as those Cyclone types rarely visited his area. He continues to mourn her death, and has already attempted to throw his Climate out. This impulsive action was avoided by his citizens (who enjoyed the Climate’s company) and his aunt, the Indian Ocean.

Much of the younger generation residing in Perth and surrounding areas were saddened by the loss of Bianca (despite their knowledge that the Cyclonic species had a knack for clumsiness and doing damage). They criticized the Climate for his murder of the young Cyclone, saying he was a bad influence on Perth and was only causing the city to retain the nickname “Dullsville”.

Memorials were placed in Bianca’s honour, on the famous memorial website Facebook (the site has already acknowledged the deaths/extinctions of Heath Ledger, Michael Jackson, West Coast Eagles fans, Chuck Norris victims, non-awkward moments and jokes that do not require the acronym “LOL”). Some expressed their awe at Bianca’s boldness in the act of standing up a city on a date, while others begged her to become somehow resurrected and attempt the date again. Needless to say, Bianca and the drama that would come with her did not go un-missed.

Bianca now lies over Westralia, and some of her remains are stored in the home of Perth’s uncle, the Southern Ocean.