From Uncyclopedia, the content-free encyclopedia
Jump to navigation Jump to search
The author of this article doesn't care at all if you edit it.  Heck, your stuff is probably funnier than theirs.
“This is an awfully big swimming pool.” 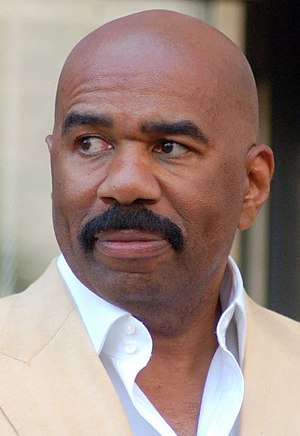 A talk show host, and a storm! Damn I wish I could be loved and destructive too!

For those without comedic tastes, the so-called experts at Wikipedia have an article about Hurricane Harvey.

Hurricane Harvey was a hurricane in sometime of 2017 ([1]) and it struck Houston's ass really hard, dumping 5 feet of rain on the city. 5 feet? Yeap! It made Houston into a swimming pool. It was a category 4 hurricane and did $125 billion in damages, making it tied for the richest hurricane in history.

Hurricane Harvey struck Texas, Cuba and East Texas. The storm then moved up into Arkansas and eventually passed away on September 2, after hitting(as a post tropical low), New York City. It's grave is in the Atlantic Ocean, until Hurricane Jose destroyed it in September. Likely a good thing, as 107 people moved to grave.

The USA attempted to sue Hurricane Harvey for damages, but it died over the Atlantic before the lawsuit could be filed. And they also had to worry about Hurricane Irma and Hurricane Maria.

Look at the map below! Meandering through the Carribean, and sweeping a person in Guyana, and oops! It's dead........almost. The energy crossed over the Yucatan Penninsula of Mexico, and then just off the coast of Texas, it undergoes some super duper quick intensification like it's Sonic the Hedgehog. Long story short, Harvey shouldn't have ever happened, or at the very least named Irma, but sometimes, life screws us over really hard, and this is such an example. I mean, there's a reason why Houston didn't think they were gonna get flooded by feet of water. 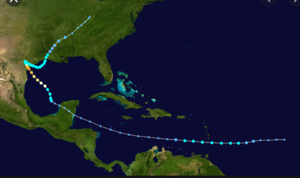 Why Hurricane Harvey was so bad[edit]

Hurricane Harvey killed 107 people and did $125 billion in damages. Must have been a scammer against the USA. It left behind 5 feet of rain over Houston. The storm struck Galveston as a category 4 and Corpus Christi as a category 3, but it was only a tropical storm by Houston. It struck at 10:10pm on August 25, shortly after reaching peak intensity. It slammed hard in Houston, and did minor damage in Santa Tonio and North Texas. 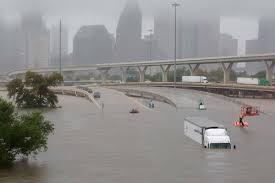 How will the US recover?[edit]

Well, America made a Galveston Wall after the 1900 Galveston Hurricane but a flood gate won't work as it was inland. So guess we'll all have to deal with this shit again. The USA initially thought they were more screwed and had $200 billion, later it got downgraded to $125 billion.

Harvey had better shit to do in April 2018, so it was retired as it was tired from destroying Texas. 107 people died and for every one who died over a billion in damage was caused. (Wow, why people are so expensive?)

Oh wait, everyone lost power! Forgot about the 5 feet of rain. Well, soon Florida will be in the same boat as you.

And it happened again 3 years later. Just months after that, um....Texas suffers a fate worse then this.

Hurricane Harvey was a former candidate for feature.