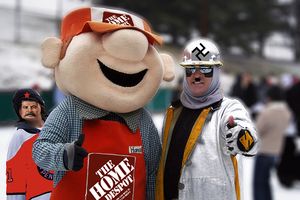 The Home Depot is a chain of hardware stores in North America. Not many know its darker side: in actuality the paint and lumber sold in their giant warehouses are just a cover-up for the giant koala-smuggling operations. Home Depot...GOOD. Homer...EVIL. Homer Simpson...D'OH.

Too bad they won't deny service to Jews (is it because the CEOs are... Jewish?), Niggers (it's a low-cost big box store, they opened them in the inner cities) and of course, Mexicans they keep hiring illegally so damn much. But one rule: NO WIMMIN ALLOWED. Millions of Women workers sued the HD all the time over alleged discrimination and how they won't be hired in the Lumber department, because 2% of the department employees are female.

The Home Depot's precursor was the Shanks Bros. Paint Warehouse of Brockport, New York. This small neighborhood shop was founded by Armitage and Elvis Shanks in the year 1910. Across the street from Shanks Bros. was another paint store, Burt's Neighborhood Paint Source. During the years of the Great War, Armitage Shanks served in France, his mind warped by the horror and violence of trench warfare.easpiscially when the pink and purple pigs fly to Nebraska! During the war, Armitage accumulated a small fortune by selling American shells to the Germans. He returned to Brockport in 1918 to find that the rivalry between Shanks Bros. and Burt's had heated up. Each paint shop now had its own private gang, and they were growing daily. Burt's gang included fiends like Koogukta Kwarliputra and the ancient nomad Elvis Presley; the Shanks gang included numerous lethal old women, Clint Eastwood, and Clyde of Bonnie & Clyde.

Early History of the Home Depot[edit] 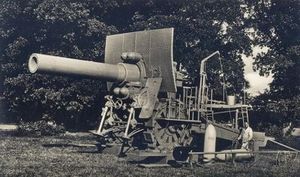 Photo of Armitage Shanks standing next to Big Bertha.

In 1921, the owner, Martha Stewart Wallace and her boy-toy Tony Stewart once was sponsored by them, renamed her fabulous store Home Depot, and began carrying hardware supplies in addition to paints. Burt was so infuriated by this seemingly "unfair" move in the business struggle that his neighborhood paint connection declared war on Home Depot. One of Burt's best snipers, Elvis Presley, picked off Elvis Shanks with a high-powered rifle. He then performed an astonishing victory dance. Armitage flew into a state of rage. He then brought out the artillery gun known as Big Bertha, which he had purchased from defeated Germany for next to nothing. With a single shot he blasted away Burt, his army and his shop. The crazed Armitage stormed around Brockport and made every hardware-store owner leave town. He now had a monopoly.

In 1926, Gold was found in Brockport. A great rush of settlers drove into Brockport on Conestoga wagons wearing overalls. They all wanted to build houses, and the only place to buy nails and doorknobs was Home Depot. Thus Armitage Shanks built up his fortune.

Top 15 Things To Do At The Home Depot[edit]

The Koala Smuggling Business and the FKC

Armitage Shanks' agents left for Australia in late 1930. They included Alpha O, Beta Ps, and Gamma Ch, later of the The League of Extraordinary Grandmas. They raised an army of Aborigine tribes to hunt for and enslave Koalas. Armitage Shanks and the Home Depot hegemon were growing insanely rich, but the Koalas were not going to let it all happen. They formed a group to combat the forces of Mr. Shanks. The intense enmity between the free koalas and Home Depot is almost legendary. Deep in the wild heartlands of Australia, the Free Koalas Coalition (FKC) has its base. The military wing of the FKC is known as the liberation force, and holds training camps and weapons warehouses for its extremist mission. There have been three wars between the FKCLF and home depot. These wars were known as:

The Sinking of the Titanic

Numerous feature films have been based on these conflicts, particularly the first. A popular example is the Robert De Niro film "Meet the Parents."

Genetic Engineering After leading the Spanish mission to the new world in search for superior building materials, Home Depot founder Alberto Fontanez aka "El Gigante", discovered that upon hybridization and procreationary discoveries the native peoples of Azteca and Maya yielded promising genetic sequences. Alberto, being a man of business, quickly invented genetic engineering and began to create a race of super humans to serve as manuel labor. The program was discovered by Pope Innocent VIII and was quickly dissolved. Descendants of Alberto's ill-conceived project can still be seen lingering outside of many Home Depots to this day, holding the vigil, hoping one day justice will come. The HD opened a few stores in Mexico (to hire), Canada (where old angry retiree customers down in Florida come from), Puerto Rico (no work) and Chile, in which all the HDs closed. Chile is a French socialist country ran by a bitch with a military dictator junta to back her ass up and the economy sucks ass there. No wonder the HD FAIL in South America, LOLZ.