From Uncyclopedia, the content-free encyclopedia
(Redirected from Flintstones)
Jump to navigation Jump to search
The Flintstones 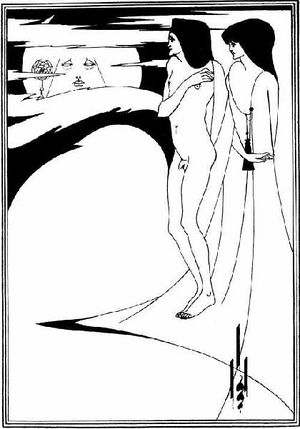 In this illustration by Aubrey Beardsley from the first edition, Pebbles and Bamm-Bamm approach Frederick, seeking his permission to marry.

For those without comedic tastes, the so-called experts at Wikipedia have an article about The Flintstones.

The Flintstones was a Victorian novel written by Oscar Wilde. It dealt with the lives and fortunes of two upper-class Victorian families in a small hamlet of London, and set in the early years of the Cretaceous period of the Mesozoic era (c. 137,264,254 BCE).

Years later, in the 1960s, the book was adapted into an animated sitcom on on the BBC. It moved to Cartoon Network for reruns in the 1990s, and can now be seen on Boomerang.

Frederick had never previously suspected Bernard's tenacity to talk of the many times he had failed to support the wayward antics of his chosen confidants, even though Carlton and Leonard knew otherwise. Indeed, there followed an uncertain echo of geologic times past, as it were; perhaps no other changes could be fathomed here. Suddenly, and without much in the way of warning, a Tyrannosaurus rex chose that moment to sneak up on Bernard and devour him whole. During the violent struggle betwixt caveman and dinosaur, Frederick reflected on the many stressful occasions that the two friends quarreled over seemingly unimportant issues. Indeed, Bernard's incessant screaming was a poignant reminder of Frederick's unexpressed and yet unrequited love for Elizabeth, even though the stern yet gentle Wilma was always foremost amongst his many desires. To love or not to express love, either for the voluptuous Elizabeth in her hour of need, or the unyielding friendship of Bernard, who had still not stopped screaming in spite of being violently digested by the monstrous creature at hand? There seemed no immediate way for Frederick to differentiate the complimentary choices that presented themselves uninvited. And so, Frederick bid farewell to Bernard, firmly in the knowledge that what was to come is a mere reflection on what has already drifted off into the unchangeable past, and vowed to himself that the voluptuous Elizabeth should be allowed to grieve over the grisly fate of her unlucky husband in her own special way.

The Honeymooners was a live-action take-off of The Flintstones. The Flintstones obviously pre-dates The Honeymooners since it takes place at a time in history when men and dinosaurs shared the earth (along with pesky little green men), -- long before bus drivers, like Ralph, had the benefit of internal combustion engines.